Why middle-class people go broke in America can be traced to small credit card charges - little things that cost under $99 or $199 or whatever, and add up over time.  Things you don't really need in life, but seem like they would be nice to have.  But ultimately, they end up in the trash after a very short time - or in a drawer somewhere or in the attic.

Solar powered lawn lights are a case in point.  Traditional lawn lights ran on a 24V transformer, and you had to run a wire out on to the lawn and bury it.  The lamps were incandescent bulbs similar to those used in automotive applications.  And they burned out with regularity.  Once one burned out, the others would follow suit, as the current to the remainder increased, causing them to burn brighter.  Yes, I know, it makes no sense, but that is what the instructions with the set said - replace the burned bulbs promptly, or you'll have even more to replace.

It was an annual or bi-annual chore to service these.  The connections would get corroded, the bulbs would burn out.  Snow shoveling or weed-whacking would damage them.  I would clean the connectors with an emory board and slather them with dielectric grease.  Sometimes I had to clean out the housings, as they filled up with spiders, dust, dirt, mud-dauber wasps, or bees.   After a few seasons, they really needed to be painted, as the plastic started to fade.

I bought most of these on sale when Builder's Square and Hechinger's went out of business - partial sets for a few dollars, and a huge transformer marked down.  Eventually, we bought some nice copper fixtures, which worked OK, but had the same problems as the plastic ones.  And the "copper" was some sort of painted-on patina that looked weird after a season or two.  Back to the paint shop!

In Georgia, I decided to give up on lawn lights.   But after a few seasons, Mark wanted a set, and after seeing some solar ones at a friend's house, pestered me to buy some.  So off to Amazon for a set of eight lights and two spotlights, for about $80 or so.  Maybe this time it will be different!  The siren song of commerce.  With new technologies for batteries, solar cells, and LED lights, maybe they would last longer and not be a constant maintenance nightmare.

But of course, that was not to be.   When mowing the lawn, they had to be taken up and set aside, lest they get damaged.   The set of eight quickly became a set of six before I realized otherwise.   They also faded quickly in the sun, and a film over the solar panels turned yellow.   They seemed to hold less and less of a charge over time - going from nearly eight hours, to six, to four, to two.  And most disturbingly, they seemed to leak, letting water into their housings and battery compartments and beneath the solar panels - no doubt accelerating the wear.

Tonight is trash night, and after seeing the pathetic flickering remnants of these lights on the lawn, I scooped them up and tossed them in the Waste Management bin.  One light, when it hit the bin, decided to turn itself on - as if asking for a last chance reprieve before execution.   I am sure the neighbors are wondering why my trash bin is illuminated from within.   I disregarded the lawn light's siren song and walked away.

Was it worth it?  For a couple years of sidewalk illumination?   I think not.  And once again, I was suckered in by the siren song of "you really need to have this neat gizmo, and you can put it on a credit card!  It is so cheap you can't not afford to buy it!"

Nevertheless, it was a lesson once again learned.   Whenever someone tries to sell you a gizmo, claiming it will change your life forever, be skeptical.  And if it seems so cheap as to be affordable, that is when you really have to watch out.

I am sure I will receive an e-mail from someone who says, "Well, Bob, you need to spend more money on these things!  Get the stainless steel nuclear powered model - guaranteed to last a decade or more!  And only $199 per lamp."   But throwing more money at the problem isn't the answer.  The solution is to realize these things are just yard junk and not worth spending any money on.  Just learn to live without. 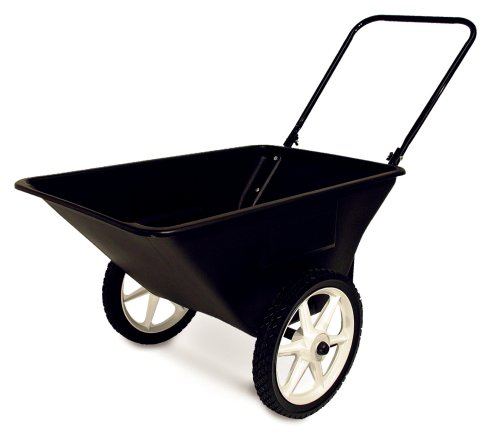 Are cheap things worth fixing?  Maybe.

On another note, under the heading of "worth fixing" I repaired a yard cart today.  I bought this on Amazon a few years ago after seeing my neighbor with his.  He moved away and now I have two.  It is a plastic cart with white plastic wheels and rubber tires, a metal handle, and a 1/2" mild steel metal axle.   For $39.99 or whatever I paid for it, it has worked well.  Problem is, on both carts, the mild steel axle rusted badly - pack corrosion to the point where the wheels fused to the axle and the axle started to bend.  One finally broke.

I went to Lowe's and found a 1/2" mild steel rod for $7.49 and a pair of clip-on hubcaps (in the fastener section in those "hard to find fasteners" drawers) for $3.14.  I made sure to give the axle a couple of coats of paint and lubricated the wheels generously.  It all went back together, good as new (with some 2" lengths of 1/2" copper pipe as wheel spacers) but it left me wondering if I was wasting $10.63 on a yard cart that may be near the end of its design life.   In other words, maybe that ten bucks would be better spent on a new yard cart, rather than trying to fix the old one.

Oh, well, what's done is done.  But it kind of irks me that the folks who designed this cart did such a nice job on everything except the axle.  A simple coat of paint would have made a big difference in the service life.  That, or I should have slathered old axle grease on the whole thing long ago.

The difference is, of course, that the yard cart lasted a decade before needing repair, and it served a useful function in that decade.  The lawn lights?  More of a decorative thing, really.

And before you say, "Well, if you spent $199 to $499 on a real nice yard cart, it would last forever!" (and they do cost that much) bear in mind that the cargo bed of my golf cart is made of the remains of such a fancy yard cart (all aluminum) whose wheel separated from the body years ago and was left behind by another neighbor who was going to "get around to fixing that someday!"