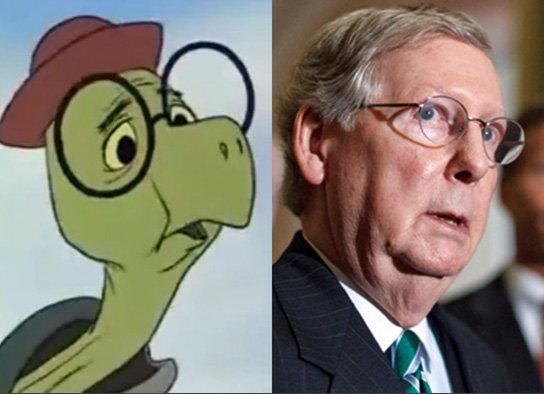 You can get more votes and get more press with pie-in-the-sky ideas than by actually getting work done.

Two items in the news today reminds us of why gridlock is so popular in Washington.  In some instances, gridlock is a good thing.  Congress passes hundreds of laws during a term and sometimes it is better if Congress just does nothing.  There really is no need to change a lot of laws in this country if things are working okay.  Sometimes the status quo is a better idea.

But you don't get reelected if you can't point to some bill that you've offered or some law that you've enacted.  But with regard to the latter, it probably isn't as much of a good idea.  Once laws are enacted, they can backfire in a big way and end up besmirching your reputation.  Proposing radical health care laws that never have a chance of being enacted, is safe.  Actually passing Obamacare can come around to bite you on the ass.

So sometimes it's better to propose pie-in-the-sky ideas that never have a chance of going anywhere as the media loves these sort of things, and the voters remember them even if they never become law.

Recently a group of senators - A bipartisan group - has put together a Sentencing Reform Bill which is long overdue.  During the 1980s and 1990s, mandatory minimum sentences were enacted into law, effectively tying judges hands and forcing them to send low-level criminals to jail for long periods of time.  Not only was this a manifest injustice, it was a huge waste of prison resources.  It took low-level criminals and turned them into career criminals as well.

There have been calls on both sides of the aisle for sentencing reform.  And courageous senators have come together across party lines to put together a sentencing reform bill.  But one Senator, Mitch McConnell, the leader of the Senate, has decided the bill will not come up to a floor vote because some cracker from Arkansas has decided that it is not a good idea.  So you can see what the reward is for working across the aisle and for bipartisanship.  And if you can remember the names of the Senators who worked so hard to put together this bill then good for you, because I've already forgotten them.

In the meantime, Bernie Sanders puts together another one of his half-assed ideas to nationalize this or socialize that, and the Washington Post and New York Times goes ga-ga over the whole deal.  Of course, Bernie Sanders's ideas have not a snowball's chance in hell of ever becoming law, even if he was elected President, which also has snowball-in-hell type of odds.

And of course Sanders never has to deal with the fallout of how such laws would actually work if they were enacted because he knows they have no chance of ever being enacted.  Rather, he gets a lot of positive press for being a "man-of-the-people" and wanting to help a little guy even though his symbolic and Pyrrhic victories amount to absolutely nothing.

Another article in today's paper illustrates the same point with regard to Nancy Pelosi.  "Nancy Pelosi Comes Out Swinging" The Washington Post and NBC gushes, claiming that she's introducing a bill to reform campaign finance laws.  Any third grader who can count on his fingers realizes that such a bill has no chance of ever succeeding in the Senate and possibly not even in the House.

Democrats and Republicans alike both like to raise large amounts of money from various corporate interests, PACs, and other odious sources.  The Pelosi bill has no chance of making it through the Republican-dominated Senate and there's a pretty good chance it won't even make it through the Democrat-dominated house.

But it makes for a good headline and a good sound bite, and that's all she's really interested in.  She's not an idiot, she realizes that these bills have no chance of going anywhere.  Rather, this gives her five minutes in the sun to be lauded as supporting democracy and the little guy and being against big businesses, even if she raises millions of dollars from special interest groups in California.

So what's the point of all this? While every politician claims they want to work across the aisle and enact bipartisan legislation, none of them actually want to do it.   The lesson is quite clear.  If you work across the aisle and engage in bipartisanship you will be punished severely both by the Press and by your peers - and by the voters.  On the other hand if you do a lot of grandstanding and introduce pie-in-the-sky ideas as bills that never go anywhere, people will remember that and remember your name and vote for you next time, even though your efforts are wholly ineffective.

People get the government they deserve.  And so long as people think that Bernie Sanders is an effective legislator, that Mitch McConnell wants to "work across the aisle,"  and that Nancy Pelosi "gets things done" not much will change in Washington.
Newer Post Older Post Home