Why Your Pay Sucks 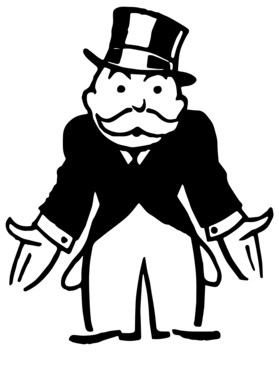 You can make ten thousand or ten million, it never ends up being "enough".


I wrote before about how Wesley Snipes went to jail after being caught up in a "tax protester" scam.  In a way, it was not his fault - he bought into these poisonous ideas that people sell, telling folks what they want to hear - that you don't owe taxes, in this case.  I am sure Mr. Snipes is a decent guy and all, he just wasn't smart enough to realize that when someone tells you something that sounds way too convenient for you, it probably is a lie.


But the rest of us don't feel sorry for him one bit - after all, he made tens of millions of dollars and was "set for life" if he could learn to live on just a few hundred thousand dollars a year - right?   But his case is typical of what happens to movie stars and professional athletes, lottery winners, dot-com millionaires, and so on and so forth.  No matter how much they make, it is never enough.

There is a lesson to be learned here, even for us mere mortals who maybe might make the six-figure salary for a few years in our lives.   No matter how much you make, it never seems like enough - and it always seems your pay sucks.   But it doesn't have to be that way.

When I dropped out of college, I got a job at a hydraulics distributor, filling orders and making hydraulic hose assemblies.   I made a little more than minimum wage at the time,  I recall maybe $4.25 an hour or so.  But I had a car that was paid-for and a small efficiency apartment that I could afford, and I could buy groceries, and maybe a few beers, and life was good.

But it never seemed like enough.  I wanted more and started spending more. I decided I needed a pet - and didn't bother to think of where I would get the money for shots, neutering, pet food, and so on and so forth.   And of course, drugs were involved - I "needed" to spend money on pot, right?

I managed to get a job at Carrier - as a contract technician - making $8 an hour, a princely sum at the time, nearly doubling my pay.   Surely, I would be in the catbird seat, making sixteen grand a year, right?   No, I went out and bought a brand-new car.  And I got a sheaf of speeding tickets and got into an accident, so my insurance rates were more than the car payments.   I wasn't doing better than before - I was actually poorer!

I was taken on full-time at Carrier, but my pay didn't go up too much.  I recall maybe I topped out at seventeen or eighteen grand a year - but the benefits, including health insurance and tuition reimbursement, were nice.  I was able to buy a small house.   I graduated from college and went to work for the Patent Office - for the princely sum of $22,000 a year!

So, now I am making money, right? Well, the cost of living in Washington, DC was high, and of course, I had to go out and buy a brand-new car again.   Duh!   And my driving habits were about the same as well.   So my insurance was murder.

Well, I would have been, if I hadn't spent $53,000 a year.  We found we "needed" a host of home improvements, more cars, and restaurant meals - the latter put on credit cards and never fully paid off.  My income rose slowly and after graduation, I got an offer for $86,000 a year.  Rich yet?

Of course not.  We needed to put in a swimming pool!   By then, my income from my own law practice was over $100,000 a year - for a few years, at least.  And Mark and gone from store manager to real estate agent - during a boom time - and we were making good money - and spending it, too.

We did some right things - Mark maxed out his 401(k) as did I, and we invested in some real estate that we fixed up and rented (and later sold, before the market collapsed).  We both started to realize we were on a treadmill, and that no matter how fast we ran, the goal seemed to get further and further away.

I remember back in my college days, visiting a neighbor in our apartment complex.  He had "nice" furniture and new wall-to-wall carpeting.   They were nice folks and I thought they were "rich" because they had nice things.  What I didn't know until later was that they were in debt up to their eyeballs with payments to the furniture store and whatnot.    I thought they were wealthy because they had "things" but they were actually broke - and that lead to them breaking up, a year or so later.

It took a long time for both of us to get off the consumerist bandwagon - and it is hard to leave it behind entirely.   Eventually, you reach a point in life where you realize that all these possessions are just work - work to pay for, work to maintain.   You want less in life - less worry, less need for money.

Suddenly, that one-room apartment I started out in sounds a lot more appealing.   No lawn to mow, no utility bills to pay, no hassles, no worries, no staggering monthly costs - and no room for "things" to accumulate.

People complain about their pay sucking.  They complain their rent or mortgage payment is too high, and that things are too expensive.   This is not new.   Today's generation seems to believe this is something novel visited only upon them - and the news media loves to pander to this idea (Headline in the NYT - "Millenials Unluckiest Generation Ever!").  But if you go back through time, you will see that "my pay sucks!" and "everything costs too much!" are cries that echo through the ages.

In the 1960's, we called it the "high cost of living" and in the 1970's, "stagflation".   My parent's generation called it "the depression" - they were so lucky having that and World War II.

The secret, I believe, it not necessarily to want more, but to live on less.  Because as my example illustrates, it may be possible to make more money if you apply yourself, but it isn't possible to make an infinite amount more.  And as Wesley Snipes' experience illustrates, even millions isn't enough, if you desire billions.  Somewhere along the line, you have to learn to live within your means.

And the earlier you start, the better off you are.  Some people get this at a very early age.  I'm just sorry I didn't.   I could have been far wealthier, but more important, far happier and less stressed in life.

You pay always sucks.  Get over it!

UPDATE:  Some folks argue that their pay sucks because someone else is making more money than they are and obviously, those folks "took away" the money from them.  But if you go through the sheaf of receipts and credit card statements in your life, you'll realize that you gave away your money to those folks, in terms of interest payments and bright shiny objects you had to have.

Others argue that if the unions were brought back, we'd all make more money.   Nice idea, but I worked in union plants in the heyday of the unions.  A forklift driver at GM was making $42,000 a year in 1980, which is over $130,000 today.  Guess what?  Those folks back then would tell you they were "underpaid" and go out on strike.  Bear in mind they had full medical coverage, even in retirement, and also had a fully-funded pension plan.

Why did they feel broke?  Because while they could afford  an Oldsmobile, their neighbor had a Buick.   They spent as fast as they earned, often borrowing money to do so.  When they got laid off (and when the factory eventually closed) everything got repossessed.   They were making enough money to create dynastic wealth, but spent it all on depreciating assets - usually things with motors attached to them.

You can pine for massive social change - it ain't happening.   You can try to make more money (and probably succeed, if you apply yourself).  But if you spend more than you make, the treadmill will never cease.
Newer Post Older Post Home