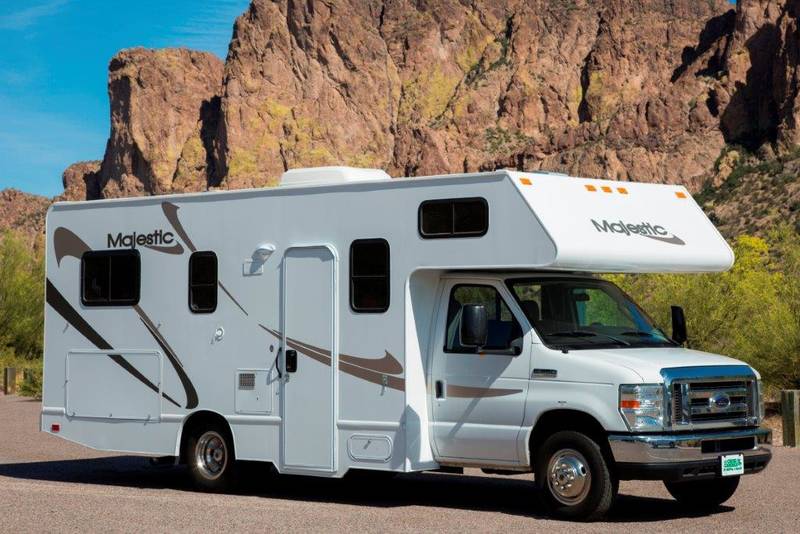 When you are upside-down on a house, a motorhome, or a boat, there may not be much you can do about it - unless....


I ran into a fellow who knows a lot about the RV business, and he buys and sells RVs and makes a little money on the side doing it.  I've met a lot of folks like this - who do this with cars, or houses, or boats, as well.  Every time I see them, they are in a different car, or boat, or whatever.   They are astute salesmen, who know the market values of certain commodities and buy strategically from motivated sellers, fix things up and clean them (you'd be surprised how dirty a lot of people are, and how clueless they are about how to sell something - clean it!).   They then use the item in question for a few months or a year and then sell it, pocketing a small profit and having "free" use of the commodity in question.

It isn't an easy thing to do, and not everyone can do it.  You have to know market values to the penny, find distressed and motivated sellers, and know how to fix small things or know people who can.   My friend told me he trolls Florida and Arizona and other retirement States for retirees or their heirs, who want to unload a motorhome or camper in a hurry.   "They always end up on those States" he says, and there is a lot of truth to that.   Some retirees get sick and realize they can't use - and can't afford to keep - the motorhome.  Or the kids come down to close out Momma's estate and want to get rid of the motorhome that has been sitting in the side yard for a year or two.   So long as they are fairly late-model campers and haven't been sitting too long, they can be fixed up and sold for a tidy profit.

In some instances, however, the owners (or heirs) owe more on the camper than it is worth.   In that case, my friend goes right to the bank - he says credit unions are the most amenable - and explains the situation.   The seller want's to sell, but the rig isn't worth as much as the loan balance.   The bank has been collecting interest payments for several years.  They can risk the owner defaulting on the loan (particularly back in 2008) and losing tens of thousands of dollars, or cut their losses and actually come out ahead if they cut the loan balance and "short sale" the camper.

He walks away with a clear title to a camper that, fixed up, is worth $10,000 to $20,000 more than he paid for it.  Of course, it helps that he has cash to pay for it, so there is no mucking about with loan approvals or fees.  He told me he felt guilty once, flipping a small Class-B within a month for an $11,000 profit.  I told him not to feel guilty, after all he bought something from an individual owner for more money than the owner would have gotten from a dealer or trading it in, and sold it to a new owner, for less money than a dealer would charge.  If he was pissing anyone off, it would be the dealers, who derisively refer to such flippers as "curbstoners" as they are selling cars, trucks, RVs, and whatnot at the curb.

Of course, today, the RV market is going nuts with the "Corona Campers" and my friend isn't buying right now - but might sell the remaining rig he has - good time to sell, when everyone is buying.  Good time to buy, when everyone is selling.  And we agreed that this time next year, there will be a lot of people who rushed into RVing and realized it wasn't for them, and now want to get out, particularly if they lost their jobs and can't make the payments.

So, it may be possible to get out from under an "upside-down" camper, boat, or whatever.  Possible, but not probable.    Like I said, he had better luck with credit unions and local banks.  Large institutions may be less inclined to deal like this, as the mid-level managers don't have the authority to make deals, and corporate policies say not to leave money on the table.   And of course, if you have money in the bank and equity in your home, why should the bank cut you a deal in the first place?  They would be better off going after your other assets.

So while this is possible, I doubt it happens too often.   The usual scenario is that in a vehicle "short sale" the debt is still owed, and either folded into another rig or car, or paid for by other means (or a judgment assessed against the borrower).

Nevertheless, it never hurts to ask, and if you are in financial distress and have more debt than assets, you are technically bankrupt, and thus the bank should realize that you are unable to pay back those debts, and than bankruptcy could result in their seeing even greater losses than a short-sale.   Then again, banks are not known for having a lot of common sense when it comes to managing collateral.

When they foreclose on a house, for example, many banks will let them sit for months or years before selling them, often losing tens of thousands of dollars in the process.   I've seen parking lots near credit unions with "re-po'ed" cars for sale - at prices higher than blue book!   No manager wants to be seen as "giving away" an asset, when the bank is on the hook for the balance, so they often make poor choices, and the house, RV, car, boat or whatever, will sit for months or years before they finally unload it.  Why they do this is beyond me, but again, it is the middle-manager decision matrix - if he loses money on a loan through re-possession, he gets a bad mark for that.  So they try to avoid a small loss, letting it blossom into a huge one.   People are funny that way.

Of course, the real problem is that banks shouldn't be writing these low-money-down or no-money-down loans in the first place.   It is a lot harder to be "upside-down" on something when you put 20% down, and impossible when you pay cash, or course.  In the old days (a few decades ago) that was the norm - you didn't make crappy loans, and they rarely went to default.  And if they did, well, you had positive equity in the collateral.

So, it is kind of hard to feel sorry for banks for making shitty loans, isn't it?  But every time we talk about tightening up loan requirements, the same loud voices who decry the "evil banks" for "predatory lending" will say that making it harder to get a loan hurts minorities and "the little guy".   I just don't see it.  If anything, these sort of loans hurt the little guy the most.

Well, we can't change the world, here.   But we can change our own behavior by not taking on shitty loan deals.  And if you are really astute and want to invest the amount of time my friend did in learning the ins and outs of the RV business, you might be able to make a buck or two at buying and selling these commodity items.