It is easy to run a website with no moderation.   When you start to moderate, it becomes a full-time job and an unprofitable one at that.


Readers ask me why I don't have comments enabled in this blog.  One advantage of the "new" Google format is that I can erase the comments block entirely, instead of having the frustration of the comments section with the notation of "only members may comment" which is an obtuse way of saying "no comments".

Comments sections, like forums, require a lot of work.  You have to curate these comments forums to erase obvious SPAM, as well as squelch flame wars and nonsense baiting posts.   And you have to do this without pissing anyone off.   If you have a robust forum or comments section, you get a lot of "engagement" from people, which means if you monetize your blog, you make some money.

So, for example, I go to a forum for BMWs, or Russian motorcycles, or Casita travel trailers.  I used to do this a lot, and contribute a lot of  "content".   It becomes addictive - going every day to check to see what new thing has been posted, or whether someone responded to your previous post.   I stopped doing that for the most part, because I found it to be depressing.  Most of the comments and postings were positive and fun, but there was always some crank who would go off on what you said, telling you that you were "uninformed" and needed to "educate yourself" or whatever - today what we call trolling.

These are unhappy people.  There was a guy on a BMW forum who sold his BMW years ago and now drove a Corvette.  He really didn't know much about cars - the BMWs he owned and the Corvette he had were leased, so it wasn't like he was wrenching on them.  Nevertheless, years after trading-in his last BMW, he felt the need to go on the site and tell everyone they were wrong about every damn thing.   I never understood it.

It was like the guy on the Casita site who mocked the idea of an electronic door lock for your camper.  "What happens when the penlight batteries go bad?   Then you're locked out!"   OK, Grandpa - penlight batteries gave away the game.  We bought one of those door locks and it is handy has hell - no longer do we have to remember if we brought the right keyring (and with a camper there are LOTS of keys) or have to remember to bring keys with you.

That's when I realized that there was little to be gained by cruising these forums, other then depression and negativism. Comments sections, particularly on places like YouTube, quickly devolve into flame wars and negative comments - probably by design, as our Russian friends want us all to be unhappy in the richest country on earth.   And from the people I meet who spend a lot of time online, it seems to be working.   Keep it up, Vlad!  You'll tear down the United Statesd by getting its own citizens to destroy it for you!

But getting back to online forums, the "genius" of Mark Zuckerstein was in seeing this was a "thing" - that people would spend obsessive amounts of time online on discussion groups, posting pictures, articles, and notes about themselves and them commenting back and forth.  Early discussion groups had you set up a "profile" complete with pictures and personal information.   Then came MySpace.

MySpace took the concept to the next level, being a discussion group about everything and nothing at the same time.   But as first-to-market, MySpace was last in the marketplace.   "Tom" became your default friend, whether you liked him or not, and he suddenly started recommending various garage bands to you.  MySpace decided, oddly enough, to become limited to a grunge rock discussion group, and people fled - right into the arms of Zuckerstein.

But Facebook wasn't immune from tolls, flames, and all the other problems associated with online forums.   I quit Facebook because there was something creepy about it that I could not put my finger on.  Plus, having been on specialty forums for years, I was getting tired of the concept. The deathknell for me was when a friend got online drunk one night and posted what they thought were hilariously funny comments about some photos of one of my remodeling projects. She was a chronic television watcher, so she thought that making derogatory comments was "funny" because the people on the sitcoms do that all the time.   I erased the most egregious of her comments and she got pissed-off and "unfriended" me and I realized that Facebook wasn't anything new, but more of the same. 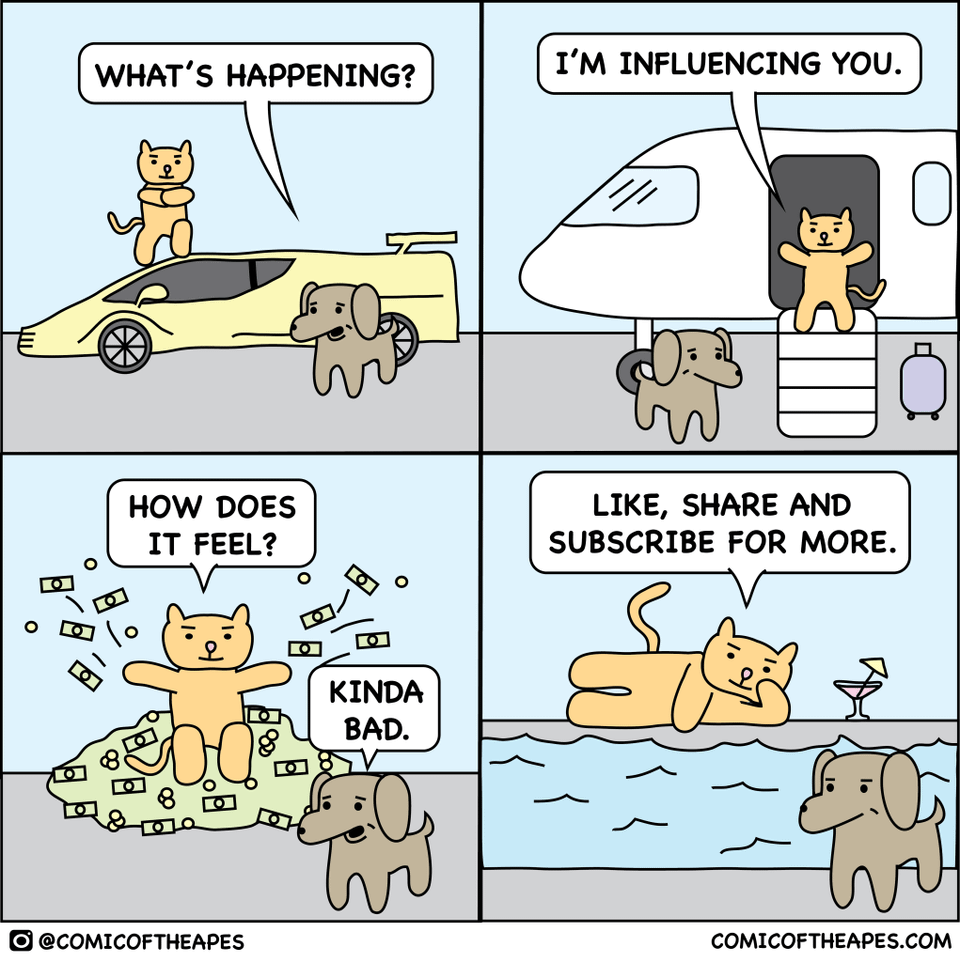 Facebook brought us the era of the "influencer" and it feels kinda bad.

Facebook, of course, lost money at first. They started spamming the site with ads including video ads, and managed to keep people from running away at full steam.   They also have done a good job of trying to co-op word-of-mouth, by doing subtle product placements and whatnot.   Facebook brought us the "influencer" and Zuckerstein will have to answer for that in the afterlife.

With billions of users (supposedly) they made a lot of money, and one way they did this was by not moderating or curating the site.   It was - and still is - a free-for-all on there, and if you want to post noxious content or just troll, there are few consequences.   Moderation is expensive - you have to hire people to look at what people are posting, or have a "report this post" feature so that someone can eyeball it and see if it violates one of the rules (and you have to create a careful set of rules, too) or whether someone is just mad at them and wants to harass them by flagging a posting or page.

It gets difficult, and no matter how careful you are, someone will claim you allowed child porn or nazi glorification or the spread of ISIS or whatever.   On the flip side, the same Nazis will scream "censorship!" and "first amendment rights!" and of course, these are people who never read the US Constitution or the bill of rights and fail to realize that the first amendment is directed only toward .government censorship, not what a private company chooses to publish.  Just because the Washington Post doesn't print your letter to the editor, doesn't mean your first amendment rights have been violated.   But today, everyone screams about rights, but few about responsibilities, which is why we are in so much trouble.

So to make money, Facebook under-moderates and over-advertises.  It is a model that works, after a fashion, although younger people seem less inclined to join Facebook, preferring to go on Snapchat  or Instagram so they can send each other naked pictures which erase instantly.  Facebook, it seems, is more and more a haven for Old Biddies, Bags and Busybodies. Whenever someone tells me the latest gossip they got from Facebook, I have to roll my eyes, as there is a 50/50 chance it is utter bullshit.  Twitter is also popular, but still unprofitable, and the bullshit factor there is even worse.

Recently, Unilever, which is the host company of a thousand brands of soap, pulled its Facebook and Twitter ads, at least until after the election.  The problem with Internet advertising is that when you make a "buy" of ad space, you have no realistic control of where your ad appears.   You may have an ad for Hertz car rental appear on my blogsite saying what a crappy deal used rental cars are.   Or your ad for wholesome family soap products appears on some neo-nazi or anarchy site promoting violence.  People may think you are endorsing the thoughts on those sites or pages or whatever.   Or they may think you are endorsing the entire scheme.  It is only after the outcry that you realize you ad appeared somewhere noxious and then you can direct Facebook or whoever not to advertise there.  But the damage to your reputation has already been done.

Unilever's move is an interesting strategy, but one that could backfire.  Unilever is basically telling Facebook to clean up its act.  But to do so would cost a lot of money.  Facebook would have to hire and vet thousands upon thousands of moderators to scan flagged content, and the result would be uneven, of course, as one man's "edgy" humor is another man's obscenity.  But the bottom line is that Facebook has been floating for a while, on its own success, which they have amplified by taking a largely hands-off approach to moderating their content.   If they start to moderate, costs will go up and profits will go down.

And if enough advertisers flee, well, they will be stuck again with "one trick of the tiny belly" and other odious ads, much as Hannity and his ilk are stuck with marginal ads for fake Viagra and penis enlargers (and end-times prepper supplies and of course, gold).  This will drop income significantly, making improved moderation even more unaffordable and squeezing profits even further.  And as profits drop, so does the almighty share price, which is how the insiders make money.  So you see, this is a real pickle for Facebook, particularly if other advertisers follow suit.

Of course, it could also be that Unilever is finding their bang-for-the-buck in Facebook and online advertising in general isn't what they thought it would be.  As I noted before, with so many adblocking options online, one wonders why anyone bothers to advertise online anymore.  Who are you reaching?  The stupid demographic?  Yet, many pine for that market share, particularly scam artists.

In a way, though, this is not an unexpected development.  The same thing happened to television.  Early on, advertisers would pull their ads from shows they thought were "controversial" and consumers would threaten to boycott advertisers who advertised on controversial shows.   So networks had "Standards and Practices" departments which would self-censor any racy or controversial content.   Pressure from advertisers - and consumers - is what started that, so in a way, it is not surprising this is taking place at Facebook, only surprising it took so long.  Facebook has been floating for a while on its reputation, and failing to make structural changes to insure its longevity.

But of course, it is far easier to manage a television network, where your content is provided by a handful of production companies, including in-house.   Facebook has billions of content providers, so you can see how expensive the process could become in a real hurry.  It will be interesting to see how this plays out!  Will others follow Unilever's lead?  And if so, what will Facebook do - real action or just go through the motions?

In addition to losing advertisers, they could lose users, too.  Already they are struggling to attract younger people - the target audience for advertisers.   As I noted before, in the forums of years gone by, we see a pattern, where a forum becomes very popular, and then sort of flames out.  One or two loud voices take over the forum, drowning out all other thought.   Newbies are shamed by the "Old Timers" who are convinced no one can tell them anything new.   It is a pattern in all of these kinds of sites.  Is Facebook immune?   I wonder.