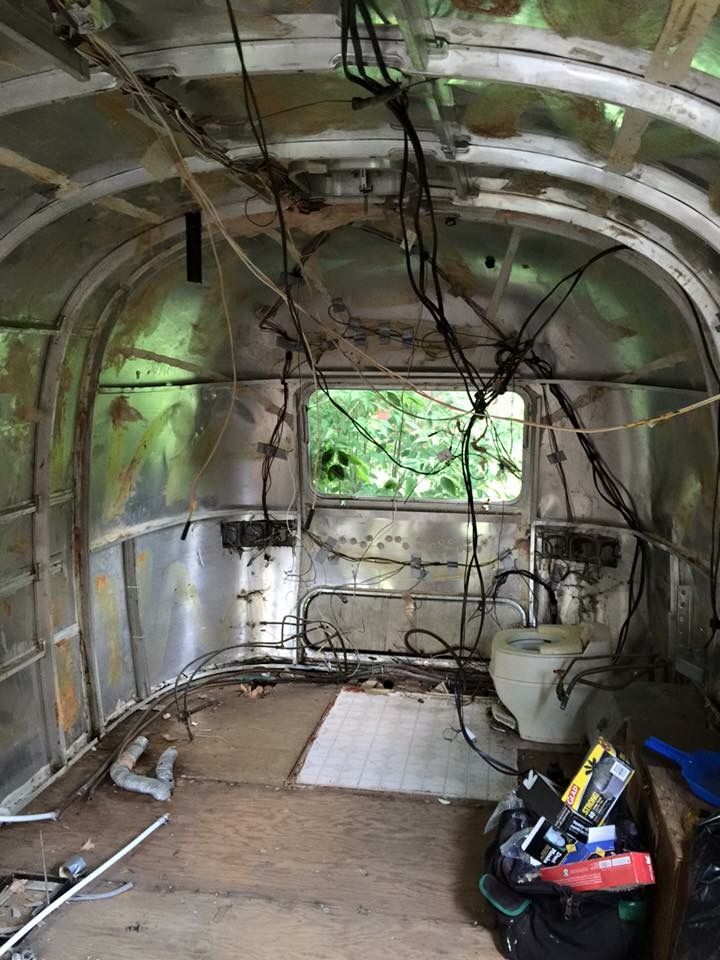 People hoard campers, too, and like with cars, they take them apart and scatter the pieces to the wind.

We see it all the time in classified ads online.  Someone has an old camper for sale, such as an Airstream, and they've "gutted" it down to the aluminum shell. "I've already done the hard part," they say, "Now it's ready to be remodeled to your specifications!"

The "hard part" of course, would be trying to rebuild such a camper by buying and installing every single damn thing that makes up a camper - an entire bathroom, plumbing, tanks, kitchen, propane, refrigerator, bedroom, dinette, wiring, lighting - you get the idea.   To the camper hoarder, the "hard part" was destroying the camper by removing all the parts - many of which are impossible to find - and throwing them out in the woods.

And of course, the hoarder wants $10,000 for this empty shell, which has dents in it, leaks, peeled clearcoat, and a rusting frame (and the belly-pan and insulation have been removed and are missing). What's not to like?   "You can fix that!" they helpfully suggest.

Worse yet, if you are still not deterred and travel down the long dirt road to this crazy person's house, you will find that this is not the only derelict camper they have on the lot, slowly sinking into the weeds.  All I can say is, don't take him up on any invitations to explore his basement.   If he asks you if anyone knows you're there, run for your life.

Why do such people exist, and why do they do this sort of thing?  What is really odd, is the junk they collect - old campers, cars, tractors, military trucks, fire engines, and so forth are paid for, and often cost the hoarder hundreds if not thousands of dollars.   Buying an old military truck isn't a very smart move - they are mostly clapped out, not very useful for anything (other than invading countries) and max out at 45 mph on city streets.  That's why you see them parked and rarely on the road.  But if you buy one with the idea of using it, well, at least that is something.

The hoarder spends thousands buying this sort of junk and just parks it and lets it sit.  Mark likes to watch YouTube videos of a family that collects old greyhound buses.  There are actually multiple channels dedicated to this hobby.  The problem is, the people go to some hoarder's house, who has this old bus sinking into the ground on dry-rotted tires, and then they spend days getting it running and then drive it home and.... park it next to their other buses they bought.   It is clear - to me, anyway - that they have no intention of "restoring" or doing anything with these buses, other than to let them sit outside and rot.   Years from now, another YouTuber will buy the derelict from them and drive it to their hoarder lot.   There are similar channels for old 18-wheeler trucks and whatnot.

Mark likes to watch these channels, as old streamlined buses like that are cool, and could make a cool RV if you are willing to throw tens of thousands of dollars at one.  During the last recession, we looked at one in Florida - with a tapered back and split rear window to boot.    But the interior was smelly red shag carpeting and someone had removed the "screaming jimmy" and replaced it with a 460 Ford Industrial gas engine (wtf?) and while it would have been an interesting project, it would have needed tens of thousands of dollars of repairs, upgrades, and restorations - realistically speaking.   Even at $10,000 it was no bargain, and we even had a barn that would have held it - easily - presuming it would make the journey to New York (which was highly unlikely).

Some folks like to tinker on things, some folks like to use them.   We used to be members of the Experimental Aircraft Association, and we met more than one homebuilder who, upon finishing the airplane in their basement, was already thinking of the next plane they were going to build.  To them, the building was the interesting part, flying, less so.   This is common in a number of hobbies.  And there is nothing wrong with that.

But I am less interested in building an RV from an old bus than in using one.   Even a brand-new RV requires a lot of tinkering and playing with to make it convenient for you.  We've had ours for only a year now, and we've easily spent well over $2,000 or more on improvements and upgrades - and that's not factoring in our labor.  That is one reason why buying a used RV can be a good deal, particularly if the owner throws in all the accessories like the pots and pans and dishes in the sink - all that little stuff adds up, over time, to a lot of dough.

Like I said, building my own RV isn't something that appeals to me - and it likely isn't a very cost-effective proposition anyway.  You can just buy a used RV for less than the cost of converting an old school bus, as I noted before.   But I get it that people like to create, tinker, and build things with their own hands - it is an emotionally healthy thing to do, and staves off depression and learned helplessness.

But the hoarder - what does he get out of destroying things?  Gutting an RV and then letting it sit and rot in your side yard - that is not self-actualization, or a way of fighting off depression.  If anything, it would lead to depression, as one realizes they squandered a lot of money only to create destruction.

Hoarding is evil, and yes, I harp on it a lot in this blog.   And the reason is, people who succumb to hoarding and other forms of mental illness often end up sliding down the economic ladder, simply because they spend so much time and money on accumulating junk - which they can never get rid of, because it is "worth something."   They give up on life, in order to curate a mound of junk.

I worry about it - a lot - because I see it happen to a lot of people, over time, and it can creep up on you, without you even realizing it, and before you know it, you are living in a house full of junk.  No one sets out to be a hoarder.  You just wake up one day with a dead cat in the freezer.   It's a thing, they all do it.  Maybe those fumes from the litter box are to blame.  Who knows?

All I know is, towing a derelict camper home usually doesn't end well - particularly if one has a derelict camper already on the property - or a host of unfinished other projects.  It is why, when I see one of these "barn find" videos on YouTube, they don't make me happy, but sad.  Because in so many of these videos, they are lauding some guy who has dozens of cars, not all kept under cover and awaiting restoration, but scattered across the lawn, slowly sinking into the grass, and turning to dust.  And yet the host will look at some pile of rust and say, "Hey, that's a rare numbers-matching Hemi 'Cuda convertible!"

Well, it was, at one time. Today it is little more than a title and a VIN plate, and probably not even the latter.  And these sort of shows only serve to validate to the viewers - who have their own lawn-load of cars - that their hoarding is somehow a smart move and that derelict cars on your lawn are an "investment" and worth lots of money.

It is akin to these click-bait "sponsored content" articles that say, "If you have this toy from the 1960's, you're sitting on a pile of money" or "These record albums are soaring in value"- both of which may be true, if you consider "a pile of money" to be $100 or "soaring" to mean going from $20 to $30, if in mint condition.

The plebes love this shit, though - convinced their pedestrian possessions are fantastically valuable. It is a way, however, that they keep us down - obsessing about possessions and not about our wealth.  It is a way that we give away and disseminate our wealth - by equating wealth with things we own, which for the most part, are depreciating assets. The only time these TeeVee channels talk about owning money is when they talk about collectible coins or confederate currency.

A reader writes that he has a hobby that he actually makes money from - buying and fixing up things.  I wish I was smart enough to do that in life, as I could have had fun and made a little money, instead of just spending it.  But at the very least, my hobby cars, boats, motorcycles, and whatnot all ran and were kept indoors when not in use.   I wasn't just collecting junk and parking it on the lawn.