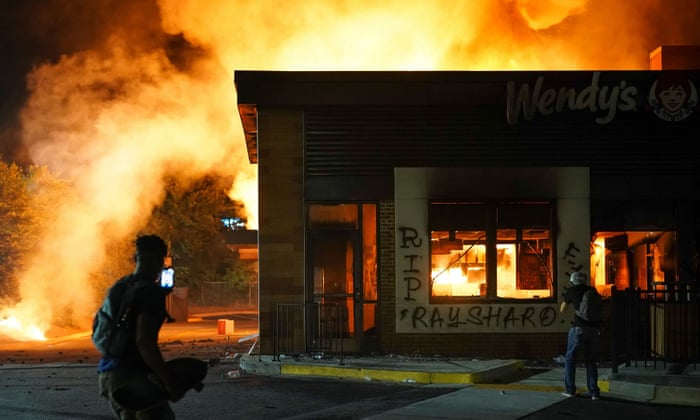 Maybe it took a virus for people to see things differently.  But why are these two white guys setting fire to a Wendy's?


This time it is different.  I am not sure why, but it is.   In the past, there have been much ado made out of alleged police brutality.  Maybe those cases were not "on point".  The fellow from Ferguson was no saint, having robbed a liquor store moments before, and trying to wrest the gun from a cop.  Even President Obama said there was no injustice done.

And the fellow in the choke hold in Brooklyn - with a record as long as your arm, "deciding" that he shouldn't be arrested - something that is not your decision to make.

In the past, those cases were murkier on the facts,  Reasonable people could disagree to the extent of whether an injustice was done, if any.  And many people I talked to dismissed these charges of outrage.

But something has changed.  The same folks I ran into who condemned the rioting in Ferguson, or felt the facts in the Trevon Martin case were not clear, are now saying "Fuck the Police!" - well, maybe not quite that.   But long-simmering grievances against the police - even by white people - are coming to the fore.  This time is different.

Of course, it doesn't help that our local police department is under investigation and several high-ranking officers are under indictment or that one of the issues on the ballot this Fall is whether to abolish the department and start over - something that has been in the works for years, now.

A year or two ago, people debated whether to tear down confederate statues, or those of slave-traders.   We were told it was "heritage not hate" and city councils were reluctant to raise the ire of conservative voters. Today, police stand by as rioters tear down these statues, or the mayor orders their removal in the dark of night - city council and judges be damned.

A year or two ago, police officers were "put on paid leave pending investigation" but today they are fired outright.  Wanna sue the city?   Go ahead, we'll spend the money defending the suit.  Governments everywhere seem to be growing a pair and not cowering in fear of Police Unions or fringe "Confederate" groups.

Something happened.   Something changed.   People who were on the fence, jumped off, and jumped off on the left side.   Arguments about "rebel heritage" now ring hollow as they should have been a year ago.  No one feels "rebel pride" for ancestors who owned slaves, or lead raids that slaughtered unarmed civilians whose only crime was to oppose slavery.

The question is, of course, is whether this has staying power, or will the pendulum swing back the other way over time?   Or, will this just drive this sort of "rebel pride" nonsense underground, where it may be twice as dangerous.   After all, that is how the KKK was formed - in the aftermath of the civil war, when anti-black sentiment was driven underground.  We could see more violence from the right as they strike out - a cornered animal is a dangerous one.

I also wonder whether people may eventually lose patience with the riots and arson and looting.  In a recent case, a black man was shot by a white officer after he fell asleep at the drive-through at Wendy's.  I guess they are pretty slow in filling orders there.   Apparently he was drunk or intoxicated and when the officers tried to arrest him, he decided that no, he wasn't going to be arrested and struggled with the officers and took the taser from one of them.   When he aimed the taser at the officer, he got shot.

Not as simple a case as the others - when you aim a weapon at a police officer, well, it is a different deal, even if it was "just" a taser (if the officer was tased, then the perpetrator could then take his sidearm).    Probably still bad judgment on the part of the officer - let the guy run away.  You have his car, his wallet, and his license.   You can ID him.   You'll catch up with eventually, if he wants his car back, anyway.

But as I noted before, some white liberals argue that criminality is part of what it means to be black which, if you think about it, is really, really racist.  Yes, Justice Clarence Thomas will jack up your car and steal your rims, to put on his Corvette.  And you have to let him do this, because he's just expressing his cultural values, which include "alternative shopping".  Getting arrested?  Only for white folks.   Black folks have an exemption and can only be arrested by consent.

If that is where we are going with this, the whole thing could be derailed in a real hurry. Unfortunately, this is what happens every time, and hey, maybe the right-wing is the one burning down buildings to discredit the whole thing (I doubt it, but anything is possible).  In 1968, people were sympathetic to the plight of inner-city minorities, that is, until the rioting started and the looting and lawlessness.  Then the 1968 Democratic convention.  Then Nixon, and "Law and Order" and an opportunity lost for another decade or more.

It seems that every time someone tries to advance the rights of blacks, some wave of criminality occurs that pushes "Law and Order" to the forefront.   In the 1980's it was the crack epidemic.  In the 1990's, street gangs.   And so on and so forth - always a call for more enforcement, longer sentences, mandatory minimums, drug courts, and the like.   Maybe it is just a coincidence, maybe not.

People are supportive of this Black Lives Matter movement, for the time being.  But if it gets hijacked by extremists, and it doesn't really matter if they are Left-Wing Antifarts, Right-Wing Buggery-Boys, or even BLM members themselves, support will quickly evaporate like the summer rain, if it devolves into violence.   My friends who surprised me with their support of all of this will change sides rather quickly if rioting and looting occurs where they live, or it is their car set on fire, or a friend dragged from their car and beaten to death because they drove down the "wrong" street.

There is an opportunity here for real change.   But I see it slipping through our fingers as we speak. Burning down a Wendy's isn't the answer to anything, even if you think someone was unjustly killed.  And making saints out of people who indeed were breaking the law isn't the answer either.

A year from now, we may have forgotten about the virus epidemic and maybe even the BLM protests.  It is amazing how people forget things - in about 18 months, by my estimation.  People don't even remember the last recession or what caused it (Oh, right, it was Obama, what was I thinking?)

Sadly, no one seems to be leading this revolution - no Jesse Jackson, no Reverend Al Sharpton, even.  Certainly no Dr. Martin Luther King.   It is just going off the rails, and that is a sad thing to see, as it seemed that this time, for sure, it was different.
Newer Post Older Post Home