Everything In One Place, Or All Over The Place? 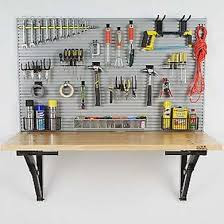 Getting organized is important. But how do you organize?  By the way, the day you finally organize all of your tools is the day you stop using them.

Mark and I have fundamental difference in philosophy as to how to organize things. I like to put everything of one type in one central location, carefully labeled and positioned so I know where it is. Mark likes to spread things out all over the place so they're handy for when he needs them.

There's no right or wrong answer here, it depends on what the thing is that you're organizing. Putting everything have a like nature into one box or one location may be convenient in that you always know where that thing is, but it's also more convenient, in some instances, to have these things spread all over the place so you always have one handy.

For example, if you're about to sneeze, it's very handy have a box of tissues next to your chair as opposed to be in a cabinet somewhere.  On the other hand, if you shop at the wholesale club and buy that lifetime supply of tissues, maybe you want to put one box by each chair, but the rest in one known location.

What got me started on this was tools.  Growing up, my Dad had one hammer, one screwdriver, and one pair of pliers.  Yes, he wasn't a handy-man. Tools were also a lot more expensive back then.  My brother and I would "borrow" his pliers to fix something and he'd come home from work and say, "Where are my goddamn pliers?" in a drunken rage, and we'd have to scramble to find them. The idea of owning more than one pair was alien to us - those things cost money!

Today, thanks to cheap products from China, you can own multiples of these things, and I do.  I have a tool chest the size of our refrigerator, and each drawer has multiples of things in it.   My English socket drawer has hundreds of sockets, as does my Metric socket drawer.  And my pliers drawer is full of them - different sizes, shapes, and types.

Of course, having everything in one location can be wasteful.   If you own several pairs of pliers, why put them all in the same place?   It isn't like you are going to use more than one or two at a time.   We have a small shed attached to Mark's studio, where we keep the lawn mower and rakes and other yard implements.   Recently, we dumpster-dived several 4' x 8' sheets of pegboard (painted white, no less).  I had previously accumulated (via dumpster-diving) a set of pegboard tool holders.   So we cut and screwed the pegboard to the inside of the garden shed - all four walls - and organized all the rakes, hoes, and shovels and whatnot.  With some extra wood laying around (again, dumpster) we made a small workbench or potting bench with pegboard behind that.   Total cost: zero.  Even the screws were free.  Some guy dumped a bunch of stuff from his Mother's house he was cleaning out, into a neighbor's dumpster.  One of the items was a brand-new unopened box of sheetrocking screws. Why would you throw those away?   It would be like a smoker throwing away a pack of cigarettes.
Anyway, we were admiring our handiwork and Mark suggested that maybe I should set up a mini-tool-room in the shed, so that I would have some basic tools - hammers, wrenches, screwdrivers, pliers, etc. if I needed to work on the lawnmower or the weedwhacker or whatever.   It was a good idea.  Having some tools in your car, or as we do, in the camper, is also handy.

But where does this distributed-method of organizing just devolve into hoarding?   Mark always like to have tissues and lip balm handy, so he has dozens of these balm items squirreled-away around the house.  And I guess it is the squirrel technique, just as I tried to squirrel away money.   Unfortunately, this means we find empty lip balms in his shorts after they have been through the wash or ones that melted when left in the car.  Or they are just found nestled somewhere, years after they were bought, set down, and forgotten.

The distributed or squirrel model has its merits, provided you don't forget (as squirrels sometimes do) where you put things.   And the more things you have, the worse this is.   Squirreling becomes hoarding in short order.   If you own something and forget you have it, or if you remember you have it but cannot find it, it is like not owning that thing at all.

Often, I go through closets and drawers and find things stuffed into them when Mark "tidies up" or decides a particular piece of tchotchke should not longer be displayed.   Some of these drawers, cabinets, and closets are stuffed to the brim, which is depressing.  I dig through them and Mark says, "Oh,. that's where that went!" as if the item marched off to the corner of a closet by itself and wasn't put there.  This worries me, because I think this is how hoarding starts.

There has to be some happy medium to this.   When living in the camper, it is good to know what you have and where it is - you cannot simply keep buying things as you run out of room and the weight becomes a factor.   Before each trip, we go through the cabinets to see what is needed and what should be left behind, and what should be added.  This way, we also know exactly what we have.   It is one reason I love living in the RV and wouldn't mind a smaller space to live in - less stuff and less places to "lose" stuff.

Stuff drags you down and stuff costs money, even at discounted Chinese prices.  My Dad had one pair of pliers in part because he was cheap and didn't want to spend money owning multiples of an item that he knew would be used infrequently.   Accumulation was less of a problem back then, as people had less "disposable income" to spend on "stuff".    In fact, the concept of "disposable income" was pretty alien to their generation.   Money wasn't something to be disposed of, or spent willy-nilly.