I'm Not Prejudiced, I Hate Everyone (Kevins and Karens) 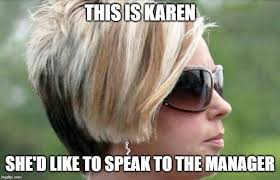 People often get mad at other people and then ascribe some sort of label to them.


I was watching a British video on YouTube and someone made the disparaging comment in the video about one of the lads. "What a Kevin!" he said. I wasn't aware of this cultural reference, but apparently (I am told, anyway) no one names their kid "Kevin" anymore in the UK, as it has become a slang name for anyone who is something of a dolt or jerk (a prat or a wanker, I guess, in their parlance).

The female version of this - particularly in the States - is a "Karen."  Karens are a little different from Kevins, in that, while they are also dolts, they are ascribed as having narcissistic personalities and a sense of entitlement.  And yea, there is more than a little misogyny thrown in there.

And racism too, as both Kevins and Karens - particularly the latter - are usually white, and Karens in particular, with blonde hair (natural or not).

But often, we see someone doing something stupid, we may ascribe this moniker to them.  For example, I was at the end of the causeway, waiting to turn left.  A young blonde lady in an SUV was waiting to turn onto the island causeway.  She has the right of way.  But rather than turn - even though the coast was clear - she decided this was a good time to finish a text she was working on while driving.  The cars behind me started honking, but I couldn't move, as Karen was blocking the intersection and absorbed in her text.  Finally she looks up, but then a truck is coming, and then another, and five minutes later, she finally puts down her phone and turns left, inconveniencing at least five or six people in other cars.

Thanks, Karen! I mouthed as she went by.  Of course, that was kind of a Kevin-ish thing of me to do, wasn't it?  I mean, she was a jerk - beyond jerk - endangering people's lives by texting-while-driving, in addition to just inconveniencing the fuck out of everyone at the intersection.  She clearly had that sense of entitlement, as if whatever she was doing was more important than what many others had to do.  Her text was more important than the guy behind me getting to work on time, for example.  But me calling her a Karen wasn't helping matters any.

It illustrates that we all do dickish things at one time or another.  We are all Kevins and Karens, when talking to customer service on the phone, or waiting in line, or trying to merge in a construction zone.   People, by their very nature, are annoying at times - at most times, it seems.

And I love people - and yet despise them.   Each person is needy, greedy, selfish, and stupid, and at the same time, loving, caring, generous, and funny.  When you are in a crowd of people, you tend to see the former characteristics and few of the latter.  Driving, for me, has become more mystifying as I get older.  People do the dumbest things trying to get from Point A to Point B.   For example, we are travelling on the Route 17 bypass, in a line of cars, two lanes wide.  I can't go any faster than the car ahead of me, unless I decide to ram him.  Both lanes are clogged.   But we're doing the speed limit, and only 1/2 mile away from I-95.   Some jerk in a Harley is weaving back and forth between lanes and trying to pass between cars (legal in California maybe, not in Georgia, and not safe anywhere).  He's tailgating the guy next to me - if that guy taps his brakes, the Harley is going down.  So much for "watch for motorcycles".

Of course, when I was younger, that was how I drove - like a maniac.

But that is just an example - so many people race toward red lights and swerve in and out of traffic, endangering everyone while accomplishing nothing.   Once you get to the store, they push and shove, to get around you (virus or no virus) or they walk down the aisle painfully slowly, side by side, pretending you are not behind them, until you too, have to push by. People are just, well, assholes either by accident or design.

Many of us don't realize we're doing it, either.  So many people drive or even walk poorly and don't give a second thought to whether they are unnecessarily inconveniencing others. We are all jerks, at one time or another.

And when we see someone doing jerkish behavior, it is instinct to label them.  If it is an old person driving slowly in the left lane with their blinker on for miles, we mutter to ourselves, "wake up, grandpa!" or something to that effect.   Back in the day, if we saw a woman driving badly, we'd mutter something about "lady drivers!" (it was an epithet back in the 1950's and before).  Today, we call her a "Karen!"

And if the driver was black.... well, you know the word people use.

That's the interesting thing.  We all get pissed off at one another at one time or another.  By our very nature, human beings are annoying.  Other creatures are probably as well.   I suspect on the anthill, one ant exclaims to the other, "This ant mound would be a heck of a lot better, if it weren't for all the other ants!"

But of course, you can't have an ant mound without those other ants to build it. Just like ants, we need each other, whether we like it or not.  The "asshole" tailgating us because he is late for work, is the same "jerk" who will be serving us at the restaurant.  Granted, he should get up earlier so he isn't always speeding on the way to work.  But we need him or someone like him, and he needs us, or someone like us.

This need to fling labels,though, is interesting.  Someone isn't just a bad driver, or a jerk, or an idiot (themselves labels) but a "lady driver" or a "Karen" or, well, the n-word.   That's how it gets started, and we all do it, labeling one another.

I am not sure how realizing this fixes things at all, or even changes anything, other than to realize we all do it. I guess it is a catharsis to fling an epithet at someone, even if they never hear it.  Maybe it allows us to label other people and thus make them less-than-human.  Karen isn't even a person, anymore, but a caricature of a human being.   And while her bitching may seem like entitlement to us, when we have a customer service issue, of course, it is because some real injustice has been done, right?