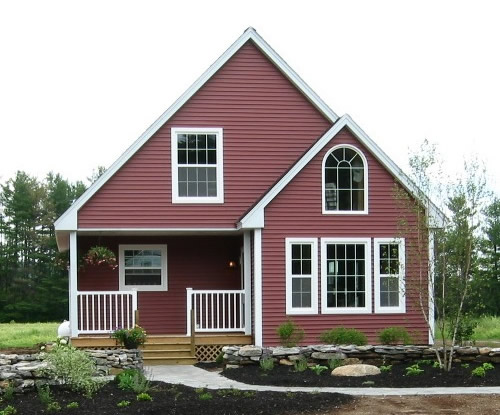 A house is just a place to live, not a "home".   And the house you live in, is a lousy "investment".

I have mentioned before that one way to surely get your weenie caught in the wringer is by buying a house.  After the meltdown of 1989, no one learned their lesson.  After the debacle of 2008, still no one learned.   People use emotional thinking when they buy a house and it ends up getting them into trouble.

This starts with the Real Estate Agents, who like to use the word "Home" instead of "House" as "Home" sounds so... homey.   Yes, they play to your emotions, including fears, to get you to sign.   One of the oldest Real Estate Agent tricks is to put a loaf of ready-to-bake bread in the oven right before you have an open house.   People come in to see the house and smell baking bread, which triggers all sorts of subliminal emotions in the brain.  We've found our hearth-and-home!  Granny just pulled warm loaves of bread from the oven!   Who wouldn't want to buy that?

But as I noted before, a house can be a good deal, in terms of saving you money, provided that you don't overpay for it, you don't buy more house than you need, you don't over-improve it for the neighborhood, and you live there for at least five years - preferably longer.

Most people, including myself, do the opposite of all these things.    During the housing bubbles - and there are many of them in many countries and they still go on today - people buy out of fear.  They are afraid of "missing the boat" on this great deal and want to jump on the ship before it sails away forever.   "Buy now or be priced out of the market for a lifetime!" is the mantra the Real Estate Agents use.  So a two-bedroom bungalow that sold for $100,000 a few years ago is sold for $400,000 to some sucker, who loses it to foreclosure.   A few years later, it sells for $100,000.  Wash, Rinse, Repeat.

Of course, this was all small potatoes compared to what happened in 2008, when people lost everything.

We did, at least, not buy more house than we needed, at least in Washington.   Our house in New York, well, did we really need four bedrooms, three baths, and an in-law suite?   Not really, and the excess house meant we had excess taxes and a lot of excess work to do.   We bought the house because it seem bargained priced compared to Washington, but we learned later on when we sold it, it was priced about right for the area.

Many Real Estate agents chant the mantra, "Buy as much house as you can afford!  Get a bigger tax deduction!" as they love to chant mantras.   So you buy a four-bedroom mini-mansion on the premise you will make a larger "profit" when you sell.   But in the meantime, you are house-poor and financially stressed and living paycheck-to-paycheck.   When the house needs a new furnace, you simply don't have the cash to afford it.   If you lose your job, your cushion of savings - if you have any at all - doesn't last very long.

Some argue that if you plan on starting a family, buying a larger house makes sense, as then you won't have to move later on.   Or if your career is just starting, you will be able to afford the larger house later on, so why not buy it now?   Or, if housing costs continue to climb as they have in the past, your buy-in will seem cheap down the road.   There are nuggets of truth to all of these arguments, but usually they are not used to justify buying a modest house with three or four bedrooms, but a tacky mini-mansion "luxury home" that is more of a want than need.

The problem with an expensive house is like an expensive car, it just costs more to own without any appreciable payback.   As I noted in a previous posting on spending, our largest single expense in life is housing - with no mortgage on our house.   $1800 a month just to live in a paid-for-house.   You buy a more expensive house, your monthly cash-flow just gets larger.   It is like buying a $50,000 car versus as $25,000 car.   Both may have all the same features and accessories, but one costs twice as much to own - but doesn't deliver twice the experience or last twice as long.

Over-improvement is another issue.  We tend to spend more on our "Home" than we would on a "House".   It is like the kid who tries to "hop up" his Mom's old Honda Accord.  It is just money down the drain, basically, and doesn't make the car worth more.   Similarly that bird bath or planter you put in your front yard doesn't really change the value of the house at all, and no, it probably doesn't affect the "curb appeal" much.   But it does add to the thousands of dollars on your credit card bill.

Even major additions and renovations are a money-waster if they bring the house above the level of the neighborhood.  In a best-case scenario, renovations of kitchens and baths might return fifty cents on the dollar if appropriate for the house and neighborhood.   But you can't put a hundred grand into a house and expect that to raise the value by a hundred grand, particularly if the neighboring houses are not worth that much.

For example, my neighbor decided to gut and remodel their home, refinancing it and plowing at least $200,000 into the home to make it into a showplace.  And it was well done, too.   Problem was, my shitty two-bedroom, two-bath house was next door.  They ended up owning the nicest house on the block, and if they had to sell it, they might not have gotten the loan balance back, at least for those first few years.   The problem was, location sells houses, and a million-dollar home in the ghetto is not worth a million dollars.

Later on, I sold my house for $700,000 because the land was worth that much and they plowed the house under and built two on that site.  My neighbors were livid, as the money I got for an empty lot was more than they could get for their house.   If they sold to the same developer, they would have broken even.   As it was, they waited a decade longer to finally sell their home, once the new houses brought the neighborhood values up.

Of course, I had done dumb things to over-improve my house.  The swimming pool was fun, but it added nothing to the value and arguably detracted.  And all the garden stuff we installed, representing many weekends spent at Home Depot, was just a ton of credit card debt and money down the drain.

The last factor is how long you live in a home.  As I noted before the rule-of-thumb in the old days - and again today in most stagnant markets - is that you have to live in a home for at least five years to recover your transaction costs.   If you buy the home, you likely pay "points" on the mortgage as well as a number of fees and expenses, which can be as much as 3% to 5% of the home purchase price - more if you have to have mortgage insurance.

When you sell the home, you may have to pay real estate commissions as much as 6% plus more fees and expenses which can easily total 6% to 10% of the selling price of the home.

So, if you are in a "normal" market where housing prices appreciate 3% a year, after five years, you have a 15% gain, but between the purchase and sale, may be as much as 9% to 15% of the home value.   As a result, moving in less than five years could mean that you "break even" on the sale, even with home mortgage interest deductions thrown in.

Of course, this all depends on appreciation rates, how many points you have to pay, what the Real Estate Agent's commission is, local tax stamps and other fees, and so forth.  The point is, do the math, and in a normal market, expect these expenses to outweigh gains for at least a few years.

Even if you stay in a home for 30 years and pay off the mortgage, the wild profits you may anticipate may be illusory.   As I noted in an earlier posting, if you do this, the costs of owning the home over those 30 years, including taxes, insurance, and repairs, basically equal the "profit" you make on the home, which is why the IRS doesn't tax the gains on your personal residence because there likely really aren't any.

And since I did that analysis, I realize my calculations for repairs were probably way low.   Based on my own spending habits, I can safely say we spend far more than I estimated on home repairs and renovations.   A house is probably a money-loser for most people in the short-term or long-term.

Of course, an apartment is just an expense, and thus if you stay in a house long enough, yes, you may save some money over living in an apartment.

But getting back to the title of this article, is it better to own a house or a home?   A recent article about financial guru Tony Robbins suggests that investment property is a better deal that a personal residence.   And of course, it is - or can be, unless you are a brainless fool who blindly buys real estate thinking it will just make money magically.   And yes, such people exist - I met a lot of them in the 2000's.

I don't think much of financial gurus or indeed, Tony Robbins and his fire-walking shtick.  But even a stopped clock can be right, twice a day.

Using emotional thinking to buy a "Home" is almost understandable.  But to buy an investment property?  Inexcusable!   But that is how others make money off the plebes - selling them overpriced condos and mini-mansions as "investments" and IPO stocks as "ground-floor opportunities!"

So, I have blathered on about this long enough, let's get down to some numbers in my next posting, House or Duplex? and analyze how investment property can really rock your world.