The Rise of the Kiosks 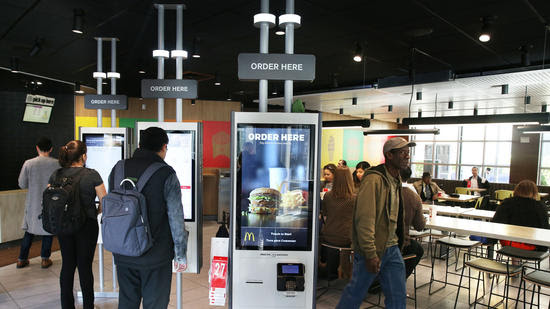 The Kiosk is already replacing human cashiers.  This trend will not likely reverse, but accelerate, as kiosks themselves are replaced by smart phone apps.


I took Mark to the dentist today and picked up the camper.  An 8:00 AM dental cleaning is something I am not really keen on.  But Mark scheduled it.  So by 9:00 when he was done, he was hungry for coffee and breakfast.  So we went to McDonald's for an egg McMuffin and coffee.

I hadn't been there in several months and the last time I was in there, they were unpacking the new ordering kiosks.  Today, they were up and running.   Since there was someone in line at the register, I used it.   It was a little cumbersome until you got used to it, but it was entirely intuitive and self-explanatory.  What was nice was that it showed all options, including things that don't often appear on the big menu board behind the registers, such as an egg-white McMuffin.

That is the problem with the registers - you get in line and it only shows the more expensive higher-calorie "meals" and other options are either obscure or not present.  The Kiosk shows everything, including calorie count.  It even mentions that out of a 2,000 calorie daily requirement, how much you have ordered accounts for.  More information is better.

I noted before that computers are better than people, in the respect that you can get a lot more information from a computer, they are more accurate in taking orders, and they are often faster and less hassle.  I did not feel "rushed" using the kiosk, whereas in a line at the register or in the drive-though, I feel I am up to bat and have to swing at the first pitch.  The kiosk provides more and better information, without a lot of hassle.

I went to use the restroom and by the time I got back, my order was ready.  The cashier did look a little lonely and bored, though.

Kiosks are on the rise, and it doesn't seem like a trend that is going to go away, unless....the kiosk itself may be outmoded by the smart phone app.   Yes, it makes no sense to have a kiosk if people can merely tap out what they want on their smart phone while driving to the store and have their order ready when they get there - charged automatically to their charge card.  McDonald's is rolling this out in 2017, other restaurants are already ahead of the game.   You and I may be old fuddy-duddies who don't like this newfangled technology, but the kids will adapt to it readily.  Pretty soon, when you go to McDonald's there will be one lonely kiosk, which like an old pay phone, won't work half the time.  It's smart phone or nothing, in the future.

We were also visiting the new Sam's Club (more on that later, it was a letdown) and they have an "app" for shopping much as WalMart does.  Sadly, the app doesn't tell you where to find things in the store, like the WalMart app does.   In fact, it was pretty useless.   They do, however, have a "Scan and buy" app which you can use to avoid the checkout line.  I have not used it yet, but it is an interesting concept.   Rather than put all your stuff on a conveyor belt and scan it in a self-checkout line, you scan each item as you put it in the cart, with your cell phone.   The total is rung up, and I presume they charge a credit card on record.

It has some teething problems.   If you buy alcohol, it will bomb out, as they have not figured out how to "Card" people electronically (why not ask at the exit, when you pick up your receipt?).   But those are trivial matters that can be solved easily, if they put their minds to it and stop being paranoid.  So not only are cashiers going to be obsoleted by the self-checkout, but the self-checkout will be obsoleted by the cell phone.

What is interesting is that, once again, the smart phone ends up being the generic machine that the personal computer promised to be.   I read recently that one reason (according to the author of the piece) that commerce from China is down is that the smart phone has become the "all-purpose gadget" replacing a number of pieces of hardware in our lives.   Computer?  Check.   iPod?  Check.   Gaming device?  Check.   Television?  Check.  Fitness monitor?  Check.  Health monitor? Check.   And so on down the line.   I hear you can even make telephone calls with it - but you probably have to download an "app" for that.

As I noted in a previous post, with a large-screen interface (already available with most phones through "screen mirroring" or "Miracast") you can show video from your smart phone onto your television.    Or any other smart phone app.  A keyboard interface, a USB interface, and you've got the desktop PC in the palm of your hand.

It may be, in the very near future that we have only one "gadget" in our household.   I am sure many younger people are already there - their laptops gathering dust most of the time.

Will cashiers disappear entirely?   Probably not.  There will still be someone to check receipts (which may be electronic) and to help sort out problems, check ID for alcohol (and tobacco and marijuana) purchases, and to be a general "fixer" when things go wrong.   This means maybe one or two cashiers replacing a dozen in a warehouse store.  It also means the cashier has to be better educated and trained to deal with technical problems.

Of course, higher-end stores will still have human clerks to assist customers, and I guess that will be seen as a luxury in the future - waited on by a fellow human being!   How tony!

But for the rest of us plebes, it will be the kiosk, or the smart phone, that we interact with.   This does sound like a weird de-personalization of our world.  You might go for days without interacting with another human being in a live one-on-one situation, even as you are surrounded by people.   How this affects people's mental health remains to be seen.

Or, maybe we are seeing it already?

P.S. - Mark made breakfast this morning.  A real English muffin, toasted so it had actual texture.   A real sausage patty and an egg that tasted like an egg.  Oh, and hot sauce.   The McMuffin, on the other hand, had no texture, taste, and eating it was like eating sawdust.   It sort of came out the same way it went in.   People eat like this all the time?  WHY??????
Newer Post Older Post Home