You Can't Be Retired And Still Work 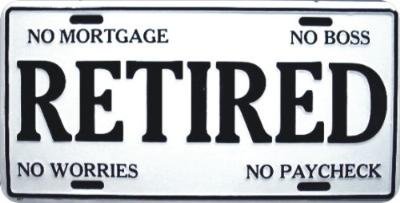 If you are still working, you can't claim to be "retired".

I saw an article in the paper today titled, "Mr. Money Beard shares secrets of early retirement at 30" or some such nonsense.   I don't blame the guy for going after the money - he is trying to brand himself as the next Sooze Orman, just as the "Extreme Retirement" guy is.   Good luck - that's the American dream!

But you can't call yourself "retired" if you are actively trying to market yourself as a money guru, complete with a branding program, online advertising, a book to sell, and so forth.   That's called working.

Yes, some of us work less than others, but we still work.   I am trying to unwind my law practice, but it is like trying to stop one of those mile-long freight trains - it takes a few miles to stop it.   I am down to three cases on my docket and my malpractice insurance is paid up through March of 2018.  About then, I will shut down shop for good, put my license on inactive status.

Then, I will be retired.   But I can't really claim to be "retired" when the checks are still coming in and there is work to be done.

A lot of people like to say they are retired when they really are not.   When I lived in Washington, DC, you would see a LOT of people with this idiotic bumper sticker or license plate that read, "RETIRED, no worries, no boss, no mortgage, no paycheck!"   But the funny thing was, you'd see this on a car with some dude in a suit in it, during rush-hour, on his way to work.   What gives with that?

Well, they were "retired" from a job with the Federal Government or the Pentagon, the latter of  which you can do in as little as 20 years, which if you joined at age 18, means you are at the ripe old "retirement" age of 38.  A Federal Employee can "retire" after 30 years, which sounds like a long time, but if you went to work for Uncle Sugar out of college at age 22, you'd be a sprightly 52 years old at "retirement".

And with the revolving-door of government employment, you usually can go back to work as a "consultant" with one of the many government contractors ringing the beltway, soliciting business from your former fellow employees in a somewhat incestuous manner, at least for a few years or maybe even a decade or more.

But "Retired"?  Not really.  Just eligible to be retired at that point.

Of course, a lot of people these days are "retiring" and then going back to work, at least part-time.   They work odd jobs in retirement, taking on work to pay some bills or save up for some purchase, like a car or boat.   Some friends of mine have gone "work camping" where they spend the summer at an RV resort for free and are paid (usually minimum wage) to be counter-clerks at the camp store, checking in campers and selling ice, or acting as maintenance people, mowing lawns, raking sites, and cleaning bathrooms.   Some do it for "fun" and the extra cash (sometimes under the table, for smaller campgrounds) some do it just for a free place to stay.   Others do it because they need the money because they didn't think through this "retirement" thing all the way.

Still other folks just keep working, period - if their company will let them.   Or, if they are self-employed, keep working because they claim they like the work.   I ran into an older Patent Attorney who does US filings for a foreign firm.  He says he loves doing the work and it keeps his mind busy.   I guess that is a good thing, but to me, after 30 years, even mindless national phase cases (where you are merely filing a translation of a case filed overseas and following instructions from a foreign attorney) get boring after a while.   Thirty years is a long time to be doing anything.

But yes, even some people still working full-time will tell you they are "retired" by dint of, well, I don't quite know what - age, I guess?

But the truth of the matter is this:  You are either retired or working, period.  And the moment you pick up a shovel or a pen or whatever, and someone gives you a nickel in return, you are no longer "retired".   And when you are actively trying to promote a business, sell books, sell ad space or whatever, you are not really retired.   If you are "vlogging across America" in your RV and cashing a paycheck from Google AdSense, you are not really retired (And there are a lot of those out there, in RVs, boats, on bicycles, or whatever).

It really is as simple as that.  I am not retired, but I hope to be by this time next year.