Putting A Target On Your Back 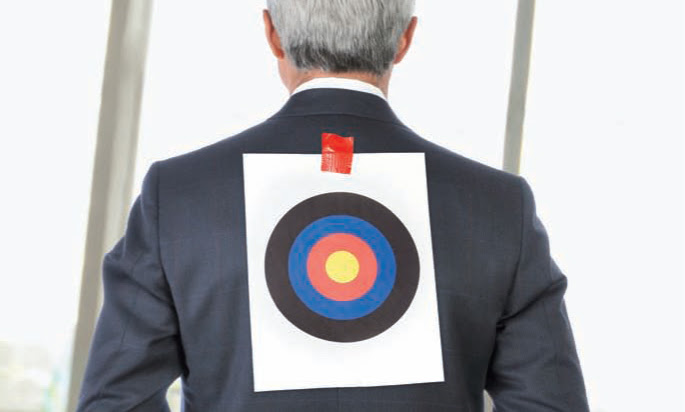 When you stand in the way of an overly ambitious person, you make yourself a target.

If you have one of those things called a "job" and have to work in an office, I pity you.  I loathed work not because I hated the work - far from it, I could immerse myself in work for hours or days.  But it was the petty-minded people that drove me nuts.  And not just the office gossips and the layabouts who did nothing and complained all the time.  The worst were the overly ambitious types who wanted to get ahead at any cost.

I learned, over the years, simply to stay out of their way, as if you tried to stop them, they would just run you over.   And eventually, they would be hoisted by their own petard, and end up on the skids.   It may seem they are winning, for a while, but eventually they go bust.

The worst thing you can do is try to stop them.  It always backfires and paints a target on your back.   When you present yourself as a roadblock to ambitious guy, you then divert his attention from his nefarious goals to you.   Since you are now the obstruction to his goals, his primary task is to destroy you.   And he will, too.

Let me give you two examples of what I mean.

Jim was an announcer on college radio.   The station manager Tim, a fellow student, had grand plans to take over the place, and later on start his own radio station after graduation.  Jim suspected that Tim was doing drugs, provided to him by record companies, as Tim started telling all the D.J.'s to play certain records in his "emphasis box" after having loud and raucous parties with record company representatives.

Jim decided to make a stink about this, "make a stand" as he put it, even though it was a college radio gig and he would graduate in a year.   He became obsessed with Tim and his machinations and told anyone who would listen what a rotten guy Tim was and how he was "destroying" the station.

The problem was, people started to think Jim was a little crazy - and he was.   His paranoia about Tim became very real when Tim got wind of Jim badmouthing him and started to take steps to get Jim tossed out of the station, or at least reduce his role.   Jim put himself in Tim's way, and Tim's number one goal in life now was to utterly destroy Jim.

Jim was marginalized and pretty much forced out of the station.  Tim won, and one reason why Tim won was that Jim's antics made Tim look rational in comparison.  The University believed Tim and disbelieved Jim.   Had Jim kept his mouth shut, Tim likely would have self-destructed along the way.  As it is, Tim owns a small chain of low-power AM radio stations and never amounted to too much.  Jim amounted to even less, though, as his rage about Tim "ruining his life" took hold of him, and he never let it go.

John and Frank work at a semiconductor firm in the legal department.  John wants to be corporate counsel for the company and eventually move over to CFO where the money is.   Frank dislikes John and suspects he is involved in a scheme to defraud the company of money.   Frank has no proof, but makes accusations anyway.   John gets wind of this and - you guessed it - sets out to destroy Frank.

He starts playing mind games on Frank - reassigning cases and making his life difficult in whatever way he can.  He subtly spreads rumors that Frank is losing his mind.   And eventually it works, Frank has a mild breakdown and John becomes corporate counsel.

Two years later, it turns out Frank was right - John was a crook and defrauding the company and he is found out and asked to leave - quietly of course, lest there be a shareholder suit.   If only Frank had been more subtle and not made himself a target, he could have waited for John's eventual failure.

In both cases, John and Tim ended up failing as they were both coke-heads.   You needn't worry about coke-heads failing - they always do.   Just wait for it.   But to go out of your way to try to stop them?   You are just putting a big target on your back.   Whatever farfetched plan they have, you are now step one:  GET RID OF YOU.   You put yourself in the path of their goal, so they have to run you over.  Nothing personal, of course!   You're just in the way.

"But," you say, "That's not fair!"   And that may be true, but to expect life to be fair is to be naive.   Life isn't fair.  Jerks get promoted and good people are underpaid - or at least that might be your perspective.   Assume your perspective may be skewed.

So what can you do if someone like that is in your workplace?  The simple answer is: your job.  That is what they are paying you to do, not play office politics.  You'd be surprised how management is already aware of the suck-ups, the coke-heads, the hangers-on and the yes-men.  These sorts usually get their comeuppance in due course.

And if they don't?   Think about working somewhere else - but only after you've established a good reputation and job history where you work.  Because the other guy wins, if you quit, are fired, or leave under a cloud.

And keep in mind a job is a means to an end, not an end in and of itself.  Worry about your own business, and not how someone is trying to climb the corporate ladder.  Save your money, spend less, bank that salary - that is the point of a "job", to make money.  Soon enough, you will be retired by choice or circumstance, and those silly office games will mean very little in retrospect.  And if you socked away your dough, you'll live happily ever after.

On the other hand, if you end up bitter and disappointed because you got squashed by office politics, well, not only will life suck, but you've let that bastard win, twice.