Traditional credit scores are pretty meaningless.  By the way, a 720 credit score is pretty shitty.

There is news today that a new type of credit score is being developed to compete with the "Fair Issac" FICO score, which has a lot of fundamental flaws.  I have written about credit scores before and why you shouldn't obsess about them and why they are considered "Intellectual Property" at least by the people creating them.

It is not hard to understand why the credit score was created.   Wading through page after page of someone's credit history (made all the worse by the poor formatting of these histories by the credit score companies) is hard to do.   How can Wally's Mattress World quickly understand whether the sucker, er, customer waiting in line to buy a new "select comfort" mattress is qualified to borrow a grand or two to buy it?  Salesmen have short attention spans, you need to cut to the chase.

On-Time Payments is one of the major factors in traditional credit scores, which seems like a pretty simple thing.  You pay your bills on-time and you are a good credit risk, right?   Well, yes and no.   One reason that many people seem to have "sudden" financial crises, is that they can continue to make minimum payments on all their debts for years, while at the same time accumulating an increasing amount of debt - like a slow-growing cancer.   One day, they can't make the minimum payments, because the debt has grown too large.   And "suddenly" they are looking at bankruptcy, not six months down the road, or even a month down the road but today or tomorrow.   The day before, their credit rating might have been 770 or higher, and people were still loaning them money.   The traditional credit score could not foresee how the future could be catastrophic.

And a credit score should predict that - not just give a backward-looking review of finances, right?   So one major change with this "new" score is to track whether the consumer's debt is increasing or decreasing over time.   As I noted in my financial gauge package post, the rate of which you are accumulating or paying off debt is like an altimeter or rate-of-climb indicator.   Debt going up?  You are diving.  Debt going down?  Your financial situation is climbing.  Under the old scoring system, the score didn't reflect whether the person was taking on more and more debt, or paying it off over time.   This is a good thing for a lender to know.

Oldest Credit Line is one of the minor aspects of credit score that some folks liked to game (after reading about in on financial pages) sometimes called "age of credit history".  The system rewarded you if you kept that old Sears charge card that you got at age 18 active for the rest of your life - even if you didn't use it.   Closing dormant accounts, which is a good thing to do, was viewed negatively by the scoring system, which is, of course, ridiculous.   Anyone who is practicing sound financial management skills doesn't leave dormant accounts open.   If you are never going to use a charge account again, why bother keeping it open and at risk for theft?   It is like a dormant bank account - use it or close it! (It is surprising how many people abandon bank accounts, which is why banks now charge monthly fees to drain them).   The new scoring system would place even less emphasis on this oddball criteria, or count the overall age of your credit history based on your lending history, not on how many accounts you left open.

Credit Utilization is another factor - a huge one, apparently - under the old system, which really was of little use to lenders.   If you had $100,000 in open lines of credit (such as credit cards) - which by the way, isn't hard to do - and "only" had $20,000 in credit card debt (which you were having trouble paying off) your score in this area could be higher than the guy with $10,000 in credit card limits and $5000 in debt, which he paid off every month.   Why?  His "credit utilization" was higher than yours, even as you were hopelessly in debt.

I have always advocated for keeping your credit limits low on credit cards.  One way I got into trouble with credit cards (and most people do) is to have huge limits on the cards which allow you to run up huge bills which cannot be paid off in one month.   This is not by accident but by design.  The credit card companies hope you run up debt and end up "trying" to pay it off for months or even years, at 22% interest, before you "roll it over" to a new card or a home equity loan.

Thus, I advocate keeping your limits to a reasonable amount - what you can pay off in a month, with maybe a small cushion for emergencies.   If they automatically raise this amount, call them and have them lower it.  The letter that says, "Congratulations!  We've raised your limit!" is not a sign of your financial acumen, but a deadly trap set for you by the bank.

Once again, sound financial planning is punished by the credit score.   And again, maybe this is by design?   After all, the people loaning you money these days don't want you to have a sound financial relationship with you - they want to ruin you, as they make more money today by utterly ruining people than they do with folks who pay off their balances every month.

So maybe the old FICO score was on-point.  It told lenders who were "suckers" out there and who they should offer ruinous credit to.   Perhaps.  Or perhaps it was a very poorly designed score in need of an overhaul.  Again, the new proposed score would take into consideration overall debt load, not just "credit utilization".

Inquiries is another area which seems rather arbitrary at first, but does make some sense.   Automated inquiries by banks and lenders are usually not counted.  But if you go around town shopping for loans over and over again, the resulting credit inquiries will count against you.  Not a lot, but a little, each.  The idea is, if you have been desperately looking for people to lend you money (and are turned down again and again) it should be a red flag.   On the other hand, if you are an astute consumer, and are trying to shop one loan against another, should this count against you?    Perhaps not.

New Accounts is related to inquiries.  If you have a lot of new recent accounts, it can count against your score, as the idea is you are taking on more and more debt.   This is an approximation, however, of whether you are taking on more debt or not, not an actual tracking of it.  And perhaps this was the only way the FICO people could track this in the past.   But on the other hand, if you were in some credit card pickle, and rolled over the balance to a 0% card, that would count against you as a "new account" even if it arguably meant you were making a good faith effort to get out of debt.

Available Credit is another factor and one which can sink a loan application in the real-world where banks actually read credit reports and not just the scores.   Yes, you can have a stellar credit score over 800 and still be turned down for a loan.   Why?  You may have too many open lines of credit.   If you have $100,000 in available credit card limits (again, not hard to do), you can quickly run up a crippling amount of credit card debt after the lender has loaned you a pile of money - and you may not be able to pay any of it back.   Again, under the old score, a lot of credit was often seen as good, while under the proposed new score, something viewed as less attractive.

Again, serious lenders actually read the reports, not just the scores.   The scoring system is a triage method to quickly screen applicants, not a means of automatically approving them for loans - in most cases.   If you have a low score, you are knocked out of the approval process.  If you have a high score, you pass that part of the application test.   But a lender will likely look beyond the score to see your overall picture - how much debt you have, how many open lines of credit you have, what your income is, and so forth. 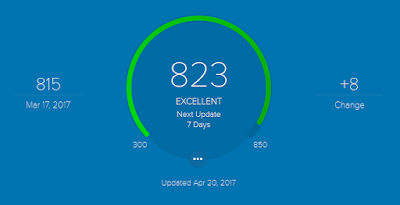 You would think a great credit score would qualify you for a loan.  Think again.  Credit scores are merely a screening tool, not an approval tool.

For example, you would think with a credit score of over 800, I could just borrow as much money as I wanted to.  This is not the case.   How much you can borrow and whether you can borrow depends on your income (ability to pay back), your current debt load, and a whole host of other factors.   Your credit score is just a screening tool, not an approval tool.   Just because you have an 800 credit score doesn't mean you are pre-approved to borrow a million dollars, if your annual income is under $50,000.

Oddly enough, at one time in my life, I had well over a million dollars in debts (commercial mortgages, mostly) and my credit score was not nearly that high.   I did, however, have verifiable income in the six-figure range.   As it turns out, ability to pay back, in terms of available income, was more important than whether I still had my Sears credit card from high school.

Credit scores will never be an absolute thing.  Even under this new proposed score, there will still be people who find ways to "game" the system to try to improve their scores - maybe a point or two.   But as I noted in many, many postings, obsessing about your credit score, beyond a certain point, is fruitless.  Pay your bills on time, don't borrow more than you need, and it will take care of itself.

So, this proposed new credit score is an improvement, but it still doesn't mean all that much.  If you are bowing down and praying at the altar of the almighty credit score, something is wrong in your life.  And yes, there are websites and discussion groups that some people visit daily just to discuss their credit score and how to improve it.   This is a distortion of reality and real life.