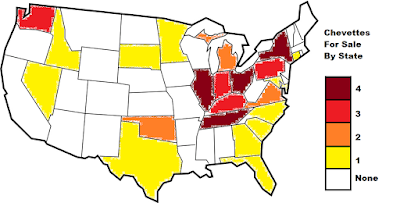 A map of all the Chevettes for sale on Craigslist in America today.  Click to enlarge.  Interesting pattern!


I was looking at SearchTempest, a site that searches all the Craigslists in America, and on a whim, searched for Chevettes for sale across America.  It was interesting to see that some people are still using these as daily drivers.  One fellow has one with 475,000 miles on it, with a broken crank, illustrating that any car can go 300,000 miles if you are willing to make a talisman of it and throw money at it.

It wasn't a bad car, it just wasn't a great one, either.

The Chevette, if you didn't know, was a small economy car based on GM's T-car chassis, originally introduced in Brazil.  It was basically a scaled-down full-size American car, complete with dual control arm front suspension with coil springs, and a trailing arm/coil spring live-axle in the back.  Basically a Chevy Caprice in 1/2 scale.   As a result, it was not very roomy inside, as the huge transmission tunnel took up a lot of room.  The automatic offered was the same as in GM's larger cars, with half the gears removed (as there was less torque).  It was not a bad car - they never seemed to rust at all, at least on the outer body.  After 30-40 years, it seems some have rusted through at the floor, no doubt from the inside-out, as door seals start to leak and water gets in and settles in the carpet.

But it was obsolete the day it was made.  Front-wheel drive was the future for small cars, and GM's own J-body Cavalier was undoubtedly a better buy.   But with Corporate Average Fuel Economy (CAFE) standards, it made sense to keep the car in production, as it was a steady seller.  Nearly three million were made and it was the best-selling small car in 1979 and 1980.  I had an 1981 model - diesel no less.  It never rusted, but it never set any speed records, either.  Over 7 million T-bodies were sold worldwide, as late as 1998 in South America.

The problem with cheap cars, though, is that few people cherish them or keep them long.   Since they are not worth much to start with, it doesn't make sense to spend much maintaining them.  So even though they soldiered on for many years, they eventually succumbed to the inevitable economic equation where any repair over $500 seems like too much to spend on such a car.  Even putting new tires on it is throwing good money after bad.

So many were junked.  But a few hardy souls kept them and kept driving them.  Others were made into hot rods or drag cars, as their standard GM rear wheel drive architecture meant that you could shoehorn in a V-6 or even small-block V-8 into the tiny car.   I have included all types for sale in my graphic, from parts cars, to daily drivers, to hot rods and even drag cars.

Some folks have the balls to ask $3000 or more for some of these - and not hot-rodded ones, either.   This is nearly as much as they sold for new, back in the day.  I suppose they might be a modest collector's item someday, a curiosity at the car show, "Hey, remember your Mom drove one of those?" kind of things.   But at this point, you could spend thousands or tens of thousands restoring one to "factory new" condition and it would be worth a few grand at best.   Oddly enough, on eBay, there are a host of Chevette parts for sale - New Old Stock (NOS) bumpers and other pieces.   I guess some GM dealers are cleaning out their parts bins.

Anyway, I noticed a pattern in the sale of these things.   They seemed to be for sale in some pretty impoverished parts of the country - places where time forgot, such as the coal mining regions of Kentucky and Pennsylvania.  Or the rust-belt cities in the midwest, not far from where it was built.  The only real shocker was Washington State, but one was for sale near Idaho, and the other belonged to some hippie near Seattle, who obviously had no money to his name.  "Good daily driver!" he says, "starts and runs good!"

The other oddball result was West Virginia - none for sale.  I mean, if there was to be a haven for old Chevettes....you would think!  But I think two things might be at work here.   Either West Virginians so value their old Chevettes that none are for sale, or perhaps the harsh mountainous climate there has driven all of them to their graves.   Or maybe our stereotypes about West Virginia are all wrong.

So anyway, I thought I would create The Chevette Index as a means of detecting not only where there is poverty but poverty of the spirit in America.   Because if you think of a 40-year old economy car as a "good daily driver" or potential "hot rod" material, maybe you need to re-think your priorities (one fellow realistically opines that his junker might make a good pit-bull cage).

It also illustrates how America's former industrial heartland has started to decay over time.  The Midwest and Northeast are a haven these days for low expectations in life.   Hey, maybe I can scrape together $1500 and buy that 40-year-old Chevette?  This is about all I deserve anyway, right?

If you are thinking along those lines, I might suggest you think about moving to somewhere where there are few, if any, Chevettes for sale.


NOTE:  The Chevette Index, of course, is a joke.  It is another example of the Bureau of Specious Statistics at work.  The sample base is far too small to draw conclusions.  However, that doesn't stop other people from doing the same.

Consider this Washington Post article that posits, based on a Survey Monkey survey of less than 1000 people nationwide, that evangelicals are all leaving their churches because of doctrinal splits over Donald Trump.

Statistics are not arguments.  When people make arguments citing statistics as authority, you are about to be bamboozled.   You see, there is no way to refute a statistical argument without reviewing the study, the methodology, the sample size, the questions asked, etc.   And most of these surveys set out to prove a point, and thus are biased in one way or another.

You are not a statistic, but an individual.   Maybe we need to treat people less as statistics or stop worrying about statistical trends, but instead shape public policy based on what is right for the country, instead of Richard Dawson's "Survey says!"
Newer Post Older Post Home