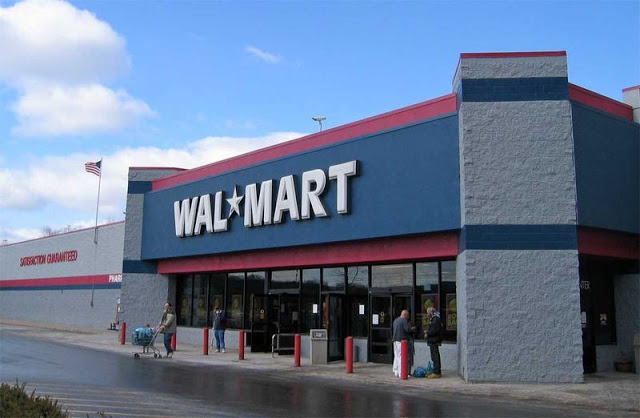 Could online sales save brick and mortar?

Recently, Walmart did something that made sense. They decided that if you want to order something on their website, they will offer an additional discount if you agree to pick it up at the store.

This idea makes sense on a number of levels. First of all, when Walmart ships to your home, they have to pay an external shipper such as FedEx or United Parcel or the Postal Service to deliver the package to your house.  However their existing supply chain includes a huge fleet of trucks and warehouses that delivers product to every Walmart store in the country on a daily basis.  There is little additional cost in moving one additional package to the supply chain.

As I noted in a recent posting, I recently bought a new set of tires for my truck. I decided I wanted to put the exact same make, model, brand, and size tire on the truck that came with it, which I've learned over many years of hard experience is usually a good idea. Pardon me if I digress a bit, but tires are very expensive these days and you really can't afford to risk buying a set of tires you end up unhappy with, as you generally can't take them back for a refund.  They last several years and you may be stuck with noisy or poor riding tires.

Thus, it makes a lot of sense to stick with what came with the vehicle as you know it will fit and ride properly. Unfortunately, the size tire I have on the truck is no longer made by Goodrich.  However I was able to find some still in stock online. I narrowed it down to Walmart and Amazon, as both had the exact same price for the tires. Both offered free shipping to home. Walmart also offered free shipping to the store.
So this left me with three options. I could order from Amazon and have them shipped to home. I could order from Walmart and have them shipped to home or order them from Walmart at them shipped to the store. I had previously ordered a spare tire for a friend's camper and had it shipped to the store. The experience was less than ideal.  When I arrived at the store, no one seemed to know where the tire was, even as Walmart's very well done electronic notification system had told me the tire had arrived.

After half an hour of messing around, I finally found the tire sitting in a grocery cart in the layaway section. I asked the lady in the layaway section if she had my tire and she said she had no idea about it, even if she was sitting next to it. I finally pointed at the tire and then she said, "Oh, THAT tire!"  This didn't give me a lot of confidence in shipping to the store.

And sadly, even though I'm a shareholder Walmart, have to say I put more trust in Amazon to deliver the goods. I've had more experience with Amazon shipping things to my home than Walmart.  Although I never had a problem with Walmart shipping to the house. So I selected Amazon, also in part because I already had an Amazon account set up so I didn't have to go through the hassle of setting up a Walmart account or trying to remember what my password was for the Walmart website.

Bear in mind that the Walmart online website is basically a clone of Amazon. They sell products from third parties as well as directly from Walmart so when you order something from the Walmart website it isn't necessarily a product that is being sold by Walmart.  People like to gchastise Walmart for selling "racist t-shirts" which are not actually being sold by Walmart but by third parties. It is akin to blaming eBay for their product lineup when they don't actually sell anything, but act as a Marketplace.

So anyway, the tires arrived okay and everything worked out. I did have to put them in the truck and take them to Walmart to have them mounted. So having the tires shipped directly to Walmart could be advantageous if I felt more comfortable and trusted Walmart not to sell my tires to somebody else or to lose them in the back room or to do something else stupid which Walmart employees generally tend to do if left to their own devices. Note that I'm not talking about the people who mount the tires who seem to be pretty responsible, but the stock clerks and other, you know, idiots.

As you can see from this decision matrix that the Walmart delivery to store really makes no sense and I suspect that few people choose this option. I suppose it might be handy for transient people who are moving or somebody in an RV who wants to order something online and then pick it up when they arrive at a store in their destination city. It might also be handy for people who are not at home to accept deliveries and are worried about deliveries being stolen from their front door which is been known to happen in urban areas. But these are the exceptions to the rule. The bulk of us would rather receive product at home. That is, if the price is the same.

So today, Walmart announces they are cutting their prices for products shipped to the store, which only makes sense. This is a good way to your induce customers to the concept and it is a choice I would have made in my tire purchase, if it could have been offered at the time. For a $600 set of tires I probably would have saved at least $50, making it worth my while to go to the store to pick up the tires since I had to go there anyway to have them mounted.

Whether I would use this option for other purchases remains to be seen. We do visit the Walmart store on a regular basis, although usually we go to the Walmart "Neighborhood Market" or as we call it "Ghetto Gourmet." The key will be whether Walmart offers the service with a minimum of hassle. Based on my previous experience purchasing my friend's trailer tire, I'm a little skeptical they won't lose my order or have it placed into inventory or set on a shelf somewhere.

The reason I went with Amazon it was because of trust. And that's what commerce in the marketplace is all about - a level of trust.  This is something that seems to be lost on most merchants today. We give people money and you trust them to give you some goods in return. Granted, it is doubtful that Walmart would rip off customers by losing products, but the hassle of having to deal with a lost product in the ship-to-store scenario would be more than it would be worth. No one wants to spend hours on the phone tracking down lost packages or arguing with customer service representatives about missing products because brain-dead-Becky shoved them in a corner somewhere in the stockroom at the local Walmart and forgot about it.
Based on my previous ship-to-store experience I was not too impressed with how they handled the process.  Shoving my tire in a grocery cart and pushing it behind the cluttered counter at the layaway section didn't strike me as a very organized way of handling this. In fact the entire layaway section seem to be in perpetual disarray.

But again, with a discounted pricing I may be inclined to try this option in the future. If I do I'll let you know how it works out.

The main point is, this could be a way to help save brick-and-mortar, not that Walmart has any problem in that regard. Sears tried a ship-to-store model, but too little too late and people's trust in Sears had eroded. At one time they had the largest catalog in the world and stupidly allowed it to expire and never tried to morph the catalog into an online experience. They left the field wide open for Amazon.

Ship-to-store could be away for Walmart to leverage its presence in nearly every American city and town in America and pushed its online presence to a level of that currently seen by Amazon. Walmart clearly is not sleeping in this regard what is taking an aggressive approach.

Clearly they are offering the same Goods at the same prices. With an advantage in shipping, it could push them ahead.
Newer Post Older Post Home