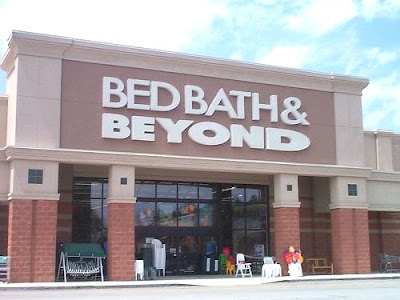 We recently made a trip to Bed, Bath, & Beyond, and didn't buy a single thing.  The store was repulsive.


My partner used to work at Linens 'n Things before they went bankrupt (the store was well parodied on Glee as "Sheets 'n Things").  Bed, Bath, & Beyond (BB&B) was their No. 1 Competition and apparently "won" the battle of the sheets and towels stores.  Or did they?

For some reason, BB&B has decided to morph their stores into the equivalent of a snake-oil salesman.  The aisles are no longer clear, the stores are no longer clean and well organized.  Instead, the center aisles are crammed to the gills with gadgets and junk that is heavily advertised on television.  And in case you missed the point, each display has a television blaring the ad for the product, showing you how the robotic mop will change your life forever.

I enjoyed the robotic mop video immensely, watching it in a trance no fewer than 10 times.  The fat white chick sits on her lazy ass drinking coffee in the middle of the day (bitch don't have a job, I guess) while the tireless robot scrubs her floor for her.  You know, when those robots have an uprising, she'll be the first one to go.  When the revolution comes.

Most of the rest of the store was the same way - useless gadgets and "gift ideas" and poorly made products.  We are looking to buy a bar stool (not the reason we went there) and just on a whim I looked at their selection.  Everything was poorly made flat-pack junk from China that you assemble with little Allen wrenches.  Even the display units were falling apart.

And some of the specialty items were ridiculous.  A plastic container designed "especially" to make pasta in your microwave!  $10 for a Tupperware bucket, basically.  You know, boiling pasta in a pot ain't all that hard!

And yet, the slack-jawed mouth-breathing locals were wandering around in a daze, snatching everything they could carry off the shelves.  After all, it was the day after "Black Friday" and the TeeVee says that everyone, yes everyone MUST SHOP!

We went there to take back a cocktail strainer we bought for our now sold vacation home (see my posting "TAKE IT BACK!") and the girl at the counter gave us cash for it - retail price.  So we made $5 on the deal, as we used one of those ubiquitous coupons that BB&B plasters all over the place, for $5 off, 10% off, 15% off, or whatever.  If you ever pay full price for anything there, you are an idiot.

We were going to find some cheap stick-on spice jar holders to put on the inside of a door of a cupboard, but they stopped selling them, apparently.  So we left empty-handed.  We also looked at a magnetic knife holder, but at $15.95 it seemed kind of pricey.  I guess with the coupon it might not have been so bad.  But by that point, we were so nauseated by the crowds of "shoppers" (why do so many people feel the need to douse themselves in perfumes?) and the whole nauseating layout of the store with its hucksterism and TeeVee displays, that we had to leave.

BB&B is sort of the white-trash version of Williams Sonoma (where my partner also worked).  Not quite as bad as "Dollar Store" but close enough (they need to get that funky "Dollar Store" smell going to make the transition complete).

And yea, that sounds "elitist" but I've reached a point in my life where the last thing I need is another cheap-ass plastic "gadget" made in China that will be broken before I get it back to the car.  There is nothing at BB&B that I want to buy that I can't find elsewhere that has a better price and better quality.

And as a "shopping experience" it is something that is disorienting and nauseating.  I just dislike going there, intensely.

Throw in their coupon madness (just lower the prices, for chrissakes!) and you have a retailing nightmare trifecta.

Judging by the number of po' white trash folks buying crapola and handing over their entire paychecks to the cashier with blubbering thanks, I suspect they may stay in business for some time.  And it appears that their market strategy of moving downscale is working.

"Shopping" works as it encourages people to over-spend on junk without comparing prices, as they are making impulse purchases.  If you try to compete on staples like towels and sheets, well, that is hard to do, as people actually make thoughtful purchases of these, comparing price and quality.  Rarely does someone impulse buy a bath towel set or a sheet set.  So they go with hucksterism junk, as it is profitable.

Hechingers, before it went bankrupt, tried this route - pushing highly profitable small appliances in a desperate attempt to bring up sales.  But as a lumber yard, they failed, not stocking enough lumber.  So people went elsewhere and the chain folded like a cheap tent.

Perhaps the same will happen to BB&B.  If they lose focus on the main products (linens, towels, bath accessories) people will stop going there for that.  If the entire store devolves into a gadget shack, who will go there?  Remember what happened to Sharper Image.  People eventually tire of "must have" gadgets that never quite work as advertised.  Eventually, even the dumbest amongst us stop buying.

But for me personally, going there is akin to having a root canal.  It is just not pleasant.   So if I needed towels or sheets, I think I would look elsewhere first.

Fortunately, we have on-line shopping these days.  I found the spice racks online on Amazon.