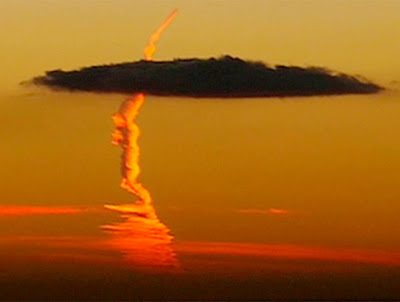 In this blog, I rag on television a lot.  It is a horribly bad influence on Americans, as it provides really bad normative social cues and also baits people into getting upset. The reason for the former is to appease advertisers.  The reason for the latter is to get you to watch, so you swallow the normative cues without realizing it.

The latest round of "speculation news" of course was the "mysterious vapor trail" last week, which of course, turned out to be an airplane.  Apparently, it was a slow news day, so they decided to instead just make up news - speculating for hours about a contrail from a jet, while providing no real information.  And of course, they play up any lack of information as information itself.  "The Pentagon doesn't even know what it is!" they harp, "Or perhaps they are denying it because it is a secret 'black ops' mission!"  More speculation coming up!  First, this message...

It was a stupid story, of course, but it got people to watch, with rapt attention, for hours. Myself, I have better things to do.  Only an idiot would watch this and think it is "News".

As I noted in The Nightly Nooze, the media has a tendency to get things wrong - very wrong - and rarely correct the record.  We learn a decade after Columbine that much of what was reported (and still believed) is just flat-out wrong, period.  No "trenchcoat Mafia", no "bullied teens", just two spoiled, mentally ill rich kids with access to guns.  Reality is not as sexy a story as the one the media made up.  So of course, the media sells the made-up story.

Hurricane Katrina is another example.  While very bad things happened and many people died in that storm, the worst things we were told about - patients being euthanized in hospitals, murders and gang-rapes in the Superdome - well, they just didn't happen.  During the height of the craziness, one news agency reported that "meat lockers" under the super dome were filled with dead bodies and that gang members with guns were running the place, gunning down anyone who got in their way and gang-raping all the women.

No one in the news media bothered to ask why a sports arena would have meat lockers in it.  But that is the nature of the media today - they don't ask questions or act skeptical about really ridiculous stories.  In fact, the more ridiculous a story is, the more likely they are to report it, as it generates good ratings and gets people to watch.

The news is all about entertainment, not education or fact-based reporting.

And baiting is part of the name of the game.  Getting people all riled up is a sure way to win ratings.  Shock jocks on the radio understood this a long time ago.  Howard Stern, in his movie Private Parts, has a scene in which the Nielson ratings show that people who hate Howard Stern listen to his radio show nearly twice as long as those who love him.  Both give the same reason for listening - "to hear what outrageous thing he will say next!"

Shock sells.  Baiting works.  Stories have to have a 'hook' to get you to listen or watch.

A friend of mine came over the other day, all outraged over a news story in which some idiot got on TeeVee and professed to represent "Pedophiles of America" and went on to say how pedophiles were merely misunderstood.  My friend was ballistic with outrage. She had swallowed the bait, hook, line and sinker, thinking that there was some sort of organized movement of pedophiles, instead of just some schmuck with a website looking for attention.  And news producers love that sort of crackpot for the very reason that people like my friend will watch with outrage and "stay tuned" through a series of five SUV commercials.   Outrage sells - it gets people to watch.

People who watch television news, be it network, cable, or even the BBC or PBS, end up being less informed that someone who reads - even the newspaper.  If you wait a few days, or even overnight, for a story to die down, the reality of a story sinks in, while the hoopla, speculation, and utter trash, often ends up discarded.

So if you watched the "mysterious contrail" story on TeeVee, you were sure some "black op" or Russian missile launch was underway.  If you read about it in the newspaper the next day, you were pretty certain it was an airplane and that the television news was over-hyped.  If you read about it a week later, you knew that it was an airplane and you know that television news is a waste of time.  The closer you are to a story, the harder it is to understand it.

Being "up to the minute" on a story is like trying to examine a forest by using a magnifying glass on a piece of bark on one tree.  Not only will you miss the overall picture, but small things will seem more important than they are.  A bark beetle, viewed through a magnifying glass, looks like Godzilla.

And what does being "up to the minute" do for you, personally?  Very little of the information provided to you on the "News" - even if it were accurate - is much use to you, personally.  The weather report and the time and temperature are about the only useful pieces of information.  Pretty much everything else is useless information, if you think about it.

The Secretary of State is trying to re-start mid-east peace negotiations.  OK, what does that tidbit of information do for me?  Nothing, really, if you think about it.  Some Congressman is proposing a piece of legislation.  How does that affect my life?  Not a lot.  I suppose if I disliked it, I could call his office.  But a better strategy would be to pay more close attention to who I vote for, and more importantly, who I contribute money to.

And not surprisingly, many people vote for a candidate based on information they get from the TeeVee - sound bites and attack ads that seem relevant at the moment, but after the election we realize were distortions or outright lies, often financed by organizations with agendas diametrically opposed to our own.

There is nothing, repeat nothing, you can get from the TeeVee that is very useful in your life.  Better and more accurate information can be obtained elsewhere, in far less time.

Unplug from the TeeVee.  It is so horribly bad for your psyche, your physical health, and your financial health.  People who watch TeeVee are reactive, not active, and more often than not view themselves as victims of circumstance, not as actors on their own behalf.  And more often than not, chronic TeeVee watchers engage in Passive-Aggressive bullshit games that they learn on "reality" shows, or the insult humor they learn on "situation comedies".

Television trains your brain, which is a neural network.  Constantly watching it will train you to do all sorts of bad things - and waste hours of your time in the process.  Pull the plug from cable and live a real life!
Newer Post Older Post Home