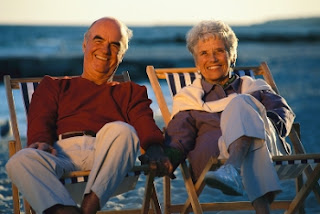 
As I have noted before in this blog, the entire concept of "retirement" is a relatively new invention of only the last 50 years or so.  When Social Security was established during the Great Depression, not many people were expected to live to collect benefits at age 65.  As one commentator put it, Social Security was there for you, should you make a mistake and live too long, sheerly by accident..

But after WWII something happened.  The concept of "retirement" was established, as an extension of life - 10-20 years or more, living in relative luxury, apart from your family.  Prior to that time, when you got old, you might move in with your kids (or hand them down the family farm) and have them take care of you in your declining years, while you tried to help them with raising a family and keeping a house or running a business.  The nuclear family might have a grandparent hanging around, at least for a time.

But things changed dramatically.  Retirement communities, virtually unheard of, a decade earlier, sprang up and grew exponentially.  Today, we have entire retirement cities throughout the sunbelt, and a luxurious retirement is the dream of everyone and many consider it a God-given right.

Between pension plans and Social Security, a person can live comfortably into their later years, in a luxurious home, with new cars every few years, and live a life of leisure.  It is a great deal, for those lucky enough to have gotten into it.  It may not be a phenomenon that goes on forever.

Is this concept due for a radical overhaul?  Can it be sustained?  As I noted in other blog entries, demographics drive much of our economy, and demographics are often ignored by modern economists.  And our generation - the "baby boomers" born between 1945 and 1960 form a huge demographic group.

But now the first Baby Boomers are slated to retire.  Someone born in 1945 will be retiring in 5 years, and after that, the rate of retirement will accelerate rapidly.  If you look at the age pyramid charts of today, they look more like a minaret, with my generation (1960) forming the largest part of this bulge.  As our generation ages, the age pyramid is projected to turn into more of a cylinder, with more and more people residing above the 65 year-old line.

When that happens, in about 15 years, what will happen to our economy?  I suspect it will make the economic trials of today look tame, in comparison.  Why do I think this?  Consider the following:

1.  There isn't enough Social Security money to pay all these people:  Once large amounts of people start claiming benefits, the well will be pumped dry in no time.  The only solution, as I have noted before, is to increase the taxes (excuse me "contributions") or cut benefits, both of which are political suicide.  Since Seniors vote, and there will be more of them, expect contributions (taxes) to greatly increase, which will stifle the economy.

2.  Needs Tests and other cuts to Social Security will be enacted:  Social Security will finally drop the pretense that it is a "savings plan" that you "pay into" and just expose itself as the welfare (entitlement) program is has always been.  This means a lot of people who did all the right things - saving for retirement, learning to live on less, etc. will get the shaft, while the guy who spent it all on a new Hummer and a Penis boat, and is now broke, will get a full ride.  Our generation is already being told not to expect full Social Security - it is almost as if they are training us for it!

3.  While Retirement Jobs will Increase, caring for old people does not create wealth:  As Adam Smith noted, the wealth of a nation is measured in its productivity, and changing adult diapers does not generate wealth for a country.  With fewer and fewer people in the workforce, and less demand for consumer goods, an increasing share of the economy will be devoted to taking care of the old and infirm.  Our county could literally "retire" as a whole.

4.  When Baby Boomers cash in their 401(k) plans, the market will tank:  When we all sell our stocks at once, the market will take a huge hit.  And starting in about 10 years, those of us with IRAs and 401(k) plans will start selling off our stocks.  Perhaps only a little percentage at a time, but collectively, this means a continual sale of assets starting in five years and getting progressively worse for the next 25 years.   And the younger generation will not be in a position to buy.  So prices may plummet - big time.  Even those of us who saved for retirement may find ourselves behind the 8-ball.

5.  Many Baby Boomers have not saved much for Retirement:  #4 above assumes that they even bothered to save.   And the average American has a pathetic amount of money in his retirement plan - usually on the order of a few tens of thousands of dollars.  Even people who consider themselves "savers" have maybe $100,000 to $250,000 saved.  It is not clear to me how these folks will survive into retirement, particularly since so many are so heavily in debt.

6.  As the population shifts upward, sales of consumer goods will plummet:  The target demographic for all marketers is the 15 to 35 age group, who will buy anything.  These are the folks you can sell electronic gadgets to, or jet skis, motor homes, or sports cars.  As the baby boomers age, they will sell off their "toys" and thus flood the market with secondhand products, depressing the market further.  The next generation, being smaller and poorer, will not be able to pay much for these trinkets.  We already saw this in the recent downturn, as many boomers shed "unnecessary" expenses in anticipation of retirement down the road.  RV and boat makers went bankrupt, while the few left, struggle to remain solvent.  The good old days of those businesses are behind us, perhaps never to return.

And of course, this doesn't even address some other likely nightmare scenarios, such as the rampant inflation, such as we had in the late 1970's, that could wipe out the portfolios of many retirees.

Yea, yea, I know.  I am just Mr. Cheerful, aren't I?  But you do have to think about these things when investing and thinking about the future.  Our generation shaped the postwar history of this country, and as we lurch toward retirement, we are slated to shape it yet again.  Not until the last Boomer is safely in the grave, will the next generation be able to breathe a sigh of relief.

Of course, there are many mitigating circumstances that could help alleviate this looming event.  Seniors may work part-time, thus adding to the economy, instead of merely consuming from it.  Overseas retirement is becoming more and more popular (in places like Costa Rica, Panama, and elsewhere) and perhaps Retirees will be our next big Export item, helping economies overseas while reducing the cost of retirement for many.

Figuring out how this next big demographic event will play out - and then investing smartly based on the correct perception of the outcome - will be the key.

The other key is to prepare now for retirement, rather than waiting for the worst to happen.  Being debt-free is important, as is having savings.  Yes, you could lose much of your savings to a stock market downturn, or to inflation.  But you would still be better off than the fellow who has no savings at all.

It will be interesting to see how our generation approaches retirement.  It will be different, to be sure.  Just as the current generation seems to shun traditional retirement activities such as shuffleboard, the next may be less inclined to join bridge clubs and Mahjong tongs.

Already, as noted in a recent New Yorker article, hardly anyone plays bridge - a demographic shift that has gone largely unnoticed.  What will Boomers do in retirement? Play Frisbee?