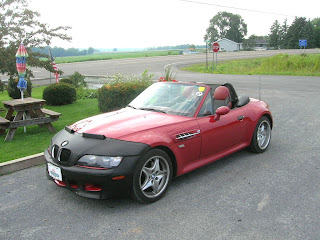 When a vehicle or possession is no longer practical in your life, it is time to move on...


Ordinarily, I would recommend buying a car and keeping it a long time - a decade or more, as that is the most economical use of any vehicle.   But what happens when a car you buy no longer fits your lifestyle?  That big pickup truck doesn't fit in the parking garage of your condo, or your sports car doesn't have room for a child seat?  When that happens, it is time to sell and move on.

I am going to sell my 1999 BMW M Roadster on eBay shortly.  It was a fun ride, but living on an island where the speed limit is 35 mph (25 in most places) and people drive golf carts on the road, having a car that has a speedometer calibrated to 160 mph makes little sense.  Plus, it was never a practical car to begin with, as it holds very little - two people and your wallet, basically.  You can't even take it grocery shopping.  So on to eBay it goes. Only 28,000 miles on it, too.

Many people "hang on" to cars like this, far longer than they should.  And within a three block radius, I know men my age and older, who are hanging on to hobby cars they bought as youths, but have since lost interest in, but manly pride prevents them from selling.  When you are 30, a Jaguar convertible, a Mercedes Roadster, or a Pontiac Trans-Am might seem like the "ultimate dream car" that you always wanted as a kid - and now you can afford it!

So you buy it, and quickly realize that while it may be the "ultimate car" for a 20-year-old, as you age, such things lose their allure.  They are just cars, after all.  The mighty M Roadster might seem like "the ultimate driving machine" unless, like me, you are an Automotive Engineer.

Don't get me wrong, it is a heck of a car.  But underneath the sheet metal and the hype, lies a parts-bin special that BMW created to use up their inventory of 318ti parts (an E36 front end, and an E30 rear) for their Spartenburg plant.  Like any other car, it was built to a design budget, and there are limitations to it.  And like any limited-production car, it has its quirks, too.

So while to a kid, it seems like the "Ultimate Driving Machine", to an adult, it is just another car in a long line of cars.  And an impractical car at that.

Like I said, I know a few men within rock-throwing distance of me, who have such cars, in their garages, un-driven, some with the batteries dead.  One is about ready to sell, but is still going through the gyrations of convincing himself to do so.  The resale value on these cars is pitiful, compared to their glorious prices when new.  The $44,000 M Roadster above will likely trade around $10,000 or so, as a decade-old used car.  It takes some courage and swallowing your pride to "let go" and sell.  And a lot of men simply refuse to do so.

Another neighbor has two such collector cars, under tarps, which have not run in months.  If the car is never even looked at, what is the point?  And of course, none of these cars will likely be "collectible" in our lifetimes.  And even if collectible, they are less likely to be so, if not in running condition or driven regularly.

And trust me when I say that you don't want to own a collector car.  Such cars can't be driven much, otherwise they lose their collectible value.  And since they sit a lot, they tend to develop funky car problems related to long periods of inactivity.  Even though the car above has only 28,000 miles on it, it has several "punch list" repair items I have to attend to, before I can sell it.  I just had the air conditioning overhauled, for example.  And that is not cheap.

Modern cars, as I have noted before, are like fresh fruit.  Use them in a normal manner, and they will provide many miles of good service.  But after 150,000 miles or 15 years, things start to go wrong.  And time, as well as mileage, is a big factor.  So the guy who puts 300,000 miles on a car in 10 years is not doing anything amazing - he is simply driving the wheels off it.  Putting 300,000 miles on a car in 20 years is a lot harder.  In 30, damn near impossible.  You have to "use up" a car before it ages too much, if you want to get optimal mileage out of it.

And therein lies the problem with collector cars.  At the Amelia Island Concours, I was surprised to see so many million-dollar collector cars fire their engines up and burn huge clouds of oil.  One participant told me that most are never driven enough to properly seat the rings, so after their million-dollar restorations, then end up as oil burners - for life.  That is pretty sad - but illustrates the problem with the collector car, which is more museum piece than transportation device.

For you and me - Joe Middle Class, trying to have a collector car is even more difficult.  For starters, we can't really afford anything that will be truly collectible.  Our pedestrian rides may hold their value after a time, but for the most part, the mass-produced iron that we collect rarely increases in price - at least in our lifetimes.

So why do people do this?  Men in particular?  I think it is a chance to be immortal.  You restore an old car, and you convince yourself that a disposable consumer good can be made to last forever.  But in most cases, it can't and won't.  Your '66 Chevelle might end up in a museum, or be ratted out by some kid.  It all depends.

My friends with their dead battery "garage queens" will find it harder to sell those cars, as they are not in running condition and haven't run in months or years (and were not properly mothballed, but rather left to sit, on the premise that "I'll get to that someday").  The M Roadster is still driven daily and is in overall good shape.  And I can still get some good money for it - enough to buy a car to drive around the island in, haul the dog and our beach chairs, and perhaps some groceries.  In other words, a car that will be more practical for island life.

And again, living on "retirement island" has been very instructive to me, as I am learning from my elders, oftentimes from their mistakes, not successes.  I look around the island and see rotting collector or trophy cars, sitting in garages, unused, or under tarps in side yards.  In addition to the rides noted above, I've seen old Corvettes (covered with mildew), Thunderbirds, a 1973 El Camino, an MG Midget, a fake MG kit car, a fake Ford Model A kit car, an old Mustang, etc.   In most cases, the cars are either rarely driven or never driven, and molder under car covers most of the time.  It other cases, the cars are driven, but are showing signs of their use and abuse - sitting outside, unwaxed by their elderly owners.  They might at least be enjoyed, but they are depreciating into a mound of rust in the salt air.

I don't want to fall into that trap.

UPDATE 2020:  Sold the M Roadster in 2015 to an investment banker in New Jersey - he's enjoying it.   I made enough on the sale to nearly pay for a brand new 2015 Kia Soul Exclaim! with "The Whole Shebang" package - glass panoramic sunroof, infinity sound system, heated and cooled seats, nappa leather interior, and so on and so forth.  It has some sort of engine in it, too.  Could care less.  Gets me to the grocery store and back and is very, very comfortable, particularly as I age.