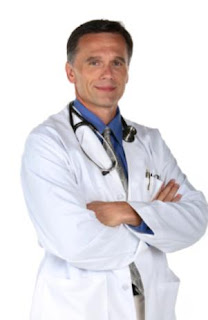 A popular sport as of late is to beat up on Doctors and other professionals in positions of responsibility.  The people usually doing the beating are people who have no responsibilities in life.
Responsibility.  We all like to think we have it, but few of us do.  And by that, I don't mean brushing your teeth or cleaning your room, although taking care of yourself is important.  But that does bring up a good point, most people don't even take care of themselves - fulfill their part of the Unwritten Social Contract.   They fail to take care of their personal finances and business, and then complain that it is the government's fault they are in debt, overweight, and unemployed.

But in reality, most people do not have much responsibility in their lives - nor do they crave or want it.  Most folks want a "job" that provides very narrow responsibilities and duties, well-defined, and then go and do it - all the while bitching and complaining about people who do have real responsibilities in life and how "overpaid" they are.

I thought about this the other day, when someone asked me to fix their computer.  They had downloaded a virus or screwed something up by yanking the power cord off the wall to shut it down, which Windows, in particular, doesn't like.  So I dicked around with it for an hour or two, finally restoring the operating system to four days prior, which seemed to fix the problem.  It took a lot of concentration and hard work to go through the hard drive looking for problems.  And not surprisingly, they had loaded on it a lot of crap that "the nice young man" at Best Buy said they should have.

I tell them to use free anti-spyware like spybot and malwarebytes, and use web-based e-mail which has free virus scanning.  But they insist on paying $39.95 a year for crap that not only is slow, it tracks their internet use and sells the demographic data to marketers.  They want me to fix their computer, but rarely do they want to actually follow my advice on how to stay out of trouble.  I should simply tell them to take it back to the "nice young man" and Best Buy and let them get bent over again and again.

And I know this, because usually when someone hands me their laptop to clean up, it is with the caveat that their brother-in-law worked on it previously but he "messed it up somehow."

It is stressful doing something like that, as people may have all their documents on the computer - or their photos, music, etc. ("Backup?  What's that?"  they say) and if you screw something up, well, you are a real bum.  If you fix it, you are no hero.

In my law practice, it is the same deal.  People invest their life's energy in inventions and businesses related to their inventions.  If you can get them a valid Patent - great, you are a hero for a day.  If not, well, you're the bum.  So far my record has been pretty good.  But with each case, there is that stress involved.  It is not like punching a clock in someone Else's factory.

And if you work in someone Else's factory, or for the government, or some other non-responsible job, you have no clue what I am talking about, either.  "Big deal," you might say, "You're making tons of money!"

You might think so, but you'd be wrong on that count.  Thanks to our increasingly risk-averse society, people in positions of responsibility have been beaten down over the years and make little more than anyone else - often far less.  In many areas of the country, people with government jobs or office drones can rake in $100,000 a year or more, with few real responsibilities or risks to their lives - other than losing their jobs.  They carry no malpractice insurance or worry whether they will be personally liable for millions of dollars in potential civil suits.

Doctors are a prime example of a beaten-down professional class.  In the health-care and litigation debates, we are told constantly how we need to "get rid of the bad doctors" that ail the profession.  But again, in reality, there are probably very few bad doctors out there, but an awful lot of bad patients.

And when a Doctor can't miraculously "cure" them, well then he's a "bad Doctor" and it is time to sue them.

All this risk would be worthwhile if the rewards were commensurate.  But most practicing physicians make only a little more than the average upper-middle class American, if that.  Insurance companies have pre-negotiated prices with physicians and hospitals, and a doctor has a high overhead, in terms of office space, the three clerks needed to chase all the insurance forms and get payment, malpractice insurance, and of course, unpaid collectibles.

You get beat up, pushed around, and treated like dirt, for what?  So you can make $5 a year more than someone who is an "Office Manger" at a law firm, whose only real stress in life is worrying about losing their job.

A doctor has a lot more to worry about - like patient's dying.  And it happens, and will happen, to any Doctor.  You or I make a mistake, and it's "Whoops!  My Bad!" and the worst we have to deal with is doing it over. Doctors make mistakes, and people die.  And we should expect that to happen on occasion.  But instead, we hold them up to this super-human standard of "never make a mistake, ever, ever".

And it is a standard that no one will ever be able to achieve.

Doctors are just a most obvious example of this trend.  It applies to all parts of our society, however.   The people shouting the loudest at political rallies about "how the government should be fixed" are usually the people with the least amount of responsibility in their own lives, who would have no clue how to fix the government if they were given the chance.  Nevertheless, they will tell you how all the personal problems in their lives are the fault of the government, or politicians, or whatever.  What little control or responsibility they have in their own lives, they refuse to make use of.

Now some might argue that they have important responsibilities in their lives, as they are parents of children.  I only wished this were so, as it seems to be a trend in our society today for people, particularly women of a certain age, to proclaim their self-importance on the world stage by virtue of the fact their boyfriend got them pregnant in High School.  "I have children to raise!" they scream, while at the same time basically shirking the responsibility of raising them properly.  When the children turn out to be illiterate juvenile delinquents, well, that's the fault of the school system, of course.

Our society is becoming more and more risk-averse, and people are naturally shying away from responsibility.  Taking risks, being entrepreneurial, are viewed as almost shameful actions.  If you are running a business, you are viewed as some Capitalistic exploiter of the masses, an "asshole boss" who is always whining about productivity and overhead costs.  And of course the government looks to you as a source of tax revenue, as well as an enforcer of immigration, anti-discrimination, and now health care laws.  Your reward for risk-taking is more risk, less money, and more taxes.

Massive rewards are still available today, and in fact are higher than ever.  But increasingly, these are being handed out not to risk-takers who risk their own money, but to people who take risks with other people's money.  Wall Street bankers and investment fund "wizards" might make a lot of cash for their clients - or not - but they get paid a lot either way.  Even if they drive the company into the ground, they can be assured they will walk away with bonuses and golden parachutes.

Corporate Executives are compensated in a similar way - if the company does well, they win.  If the company tanks, they still win.  There is no risk to their reward package.  The small businessman or entrepreneur, on the other hand, risks all his own money, and is browbeaten and taxed to death as a reward.  Even if he succeeds, the best he can hope to do is to "sell out" to a big company and make a modest rate of return - probably far less than one year's compensation of the CEO of the company buying his entire business.

And we wonder why our country lags behind the rest of the world in job growth and productivity.
Newer Post Older Post Home