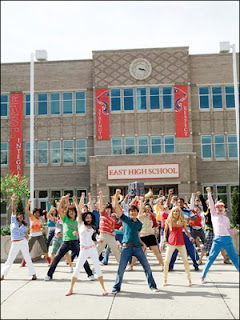 Many folks never really leave the High School mentality behind, and spend the rest of their lives worrying about what other people think or whether they are liked or popular.  Screw that.
High School.  If you are a clueless airhead, it was the best four years of your life.  If you have half a brain, you couldn't wait to leave.  What other place in the world puts the dumbest and most violent people in charge, other than a 3rd world dictatorship?  Banal teaching methods (remember the text books?) oftentimes second-rate teachers, and little actual challenge or work to do, resulting in lots of free time for teens to establish a twisted social hierarchy.

When I left high school, it was good bye and good riddance.  But surprisingly, I find that many folks never wanted to leave and still try to live as though they were there.  I live on a resort island with endless miles of sandy beaches, four golf courses, miles of bike paths through the live oaks, from the marshlands to the beaches.  Historic structures and a fabulous hotel and restaurant.  So much to do and see.  You'd think people would be happy here, right?

And you'd be wrong.  Like Key West and its natives, many of the "locals" never go to the beach or use much of the amenities on the island.  Instead, they worry and concern themselves about the social standing, pecking order, and machinations of many of the local citizen's clubs and organizations.  To them, the most important thing is what someone said at a bridge party last week, and how this affects the pecking order of the social group.

In short, it is High School, all over again, only with old people.  And yes, there are nerds, and jocks, and cheerleaders, and "bad girls" and even the stoners and outcasts.  And yes, you will get a wedgie from the jocks in gym class.  50 years since graduation, and they haven't changed one iota.

Of course, it all is so terribly important - if you think it is.  The rest of us, having grown up, don't really care what Suzie said about Jeanie, or whether her crab sandwich was really a tad dry.  And we don't really care whether the Parcheesi club is going to blackball a new member or not.

Most of us have grown up, for chrissakes.

For some of us, living on a resort island means living the resort life - visiting the beach, playing a round of golf (without joining a "league", thank you), riding the 20 miles of bike paths, having a picnic in the woods, or whatever.  You know - resort life.

But it is sad, many of residents are instead constantly caught up in silly local politics and who's who on the island.  Go to a dinner party and the conversation quickly turns to how some group member (not present, of course) is a jerk, or how the Island Authority is screwing things up, or some other silly tempest in a teapot.

Ask them if they enjoyed a round of golf today or whether they've been to the beach lately, and all you will get is a blank stare.  Go to the beach?  Haven't done it in years!

One wonders why they bother paying a huge premium to live in a resort location, when for less than half the money they could play such High School games in the Villages.  Perhaps a smaller pond allows them to be a bigger fish, I guess.

And the same pattern is repeated again and again, up and down the coast, not just on our little island.  People become obsessed with their "social lives" rather than enjoying the fact they are living on an island.

Why is this?  Television is to blame in a large part.  On any given night, go for a drive, and the flickering blue glow of the "talking lamp" illuminates most homes.  And on each TeeVee, a "reality show" trains viewers to expect that life is nothing but a series of nasty arguments, backbiting, and gossip.  People watch this drivel and think that is what life is all about.  It is their normative social cue.  So the next morning, they get up and think about how they can cause trouble - Passive-Aggressive trouble - because that's what the TeeVee told them to do.  They want to turn their own lives into an episode of "survivor" and "vote someone off the island".

In a similar manner, you can always spot people who watch a lot of sitcoms, as they tend to talk in insults and sexual innuendo all the time.  Because that's the way people talk on sitcoms these days - they insult each other - all in "fun" of course.  Or they make oblique sexual jokes.  And the canned laughter goes on and on.

And a large number of TeeVee shows are about high school, oddly enough.  For some reason, people seem to be obsessed about a four-year part of their lives, well into their 30's, 40's, 50's and beyond.  So they learn to think and act like high-schoolers, and never progress or grow up.

But those are television shows, not "reality" - even if they call them "reality television".  And living your life like it is a TeeVee show is really, really stupid.

While walking the dog the other day, we met a couple walking and I introduced myself.  We had admired their house and told them how nicely they had done it over.  I started to converse with them, and asked them if they knew some folks here on the island.  One of the couple interrupted.  "I don't mean to be rude," she said, "but we moved here to get away from people, and we really don't want to get involved with social groups here on the island.  We came here to get away from all that."

"No problem!" I replied, "I understand completely where you are coming from and I respect your decision.  In fact, it is a very wise decision, as there is little to be gained from 'socializing' on this Island."

And with that, I turned and walked away, respecting their privacy.  I am sure the "social set" thinks they are "weird" for not desperately wanting to join the annual dinner group or the citizen's association, or any one of the number of utterly inane organizations we have.  But they are the smart ones.  They came here to enjoy the island not the inane "social scene" that is artificially created by a few lonely and bored individuals.

I guess some people need to be joiners - to belong to groups and be part of the pack - so that they can understand what it is they are supposed to do - to get those societal cues they need to reassure themselves that what they are doing is "normal."

As I have noted before, getting your normative cues from other people is often fraught with hazard.  Learning to think for yourself is hard and difficult, but it also is rewarding.  It may be safer in the center of the pack, but the grass there is all trampled down and pooped upon.  Living at the edge is more rewarding, but there is more risk.

Of course the joiners and conformists will always ridicule your choices in life, largely because they are threatened by them.  If you do not conform to their norms, it unsettles them, as it calls into question their conformity, and makes them wonder whether they made the right choices.  So rather than have to think about it, they shout you down or ridicule you.

The great thing about being an adult is that you graduate from high school and you don't have to go back there.  But for some folks, life is perpetual high school, and apparently they like it that way.  It is sad, because I think people like that are missing so much in life.  While they set up their petty intrigues and silly passive-aggressive games, and go to meetings and join organizations - just to shout down the deafening silence in their lives - their real life is passing them by, bit by bit.  Another beautiful sunrise and sunset has occurred, and they missed it, obsessed with some silly club or meeting - or worse, TeeVee show.
Newer Post Older Post Home