Should You Stop a Friend from Driving Their Car Off a Cliff? 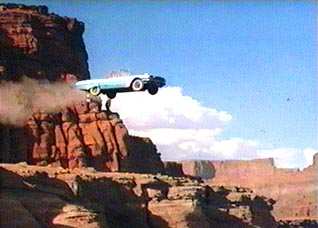 If you see a friend about to drive their car off a cliff, should you try to stop them?


As I have noted before, altruism is always suspect, if not always evil.  It is temping for people to think they are "doing good" by helping others, but in fact have hidden agendas of their own - often merely the status-seeking of being perceived as altruistic.  Unless altruism is done totally anonymously, it really is not altruistic.

But what should you do when someone you know and love is engaging in self-destructive behavior?  Should you sit by idly and watch them drive their car off a cliff, or should you mention to them that there is a cliff ahead?  What do you do if they merely argue that going off the cliff is a wise shortcut?  Do you wrench control of the wheel from them?  Or just say "have a nice trip!"

I noted in an earlier post how my later Sister once called me and said "I have vacation time coming up, let's stage an intervention for Mother!" to which I replied, "You have a strange idea of what constitutes a vacation!"

It is a tricky proposition, staging interventions or trying to take control of someone else's life.  And for the most part, such efforts can backfire in a big way. And while we might think we are "helping" or being "loving" or being "friends", often the person being "helped" doesn't want help.  And of course, should we really be trying to run other people's lives when perhaps our own car is headed off a cliff as well?

So what does this say?  Well, first off, preserving your own sanity and safety is the most important thing you can do, and no, it is not being "selfish" to take care of yourself.  If you don't, who is going to stage the intervention for you?  Perhaps a better model than staging interventions is for people to take care of their own business first - the Unwritten Social Contract I have mentioned in the past.

If you really feel the need to warn your friend, go ahead.  But don't expect them to listen to you.  Everyone has their own ideas of how to live, and don't be surprised if your friend not only doesn't listen to your warning, but argues instead that driving off the cliff is a time-saving shortcut.  So not only will your warnings fall on deaf ears, you will be ostracized for giving them.

And again, you have to look at your own life carefully before deciding you are in a position to "intervene" in another's.  My Sister, at the time she proposed "intervening" in my Mother's life, was struggling with her own marijuana problem, her husband's drinking, and her failing marriage, not to mention a runaway daughter and a son in trouble with the law.  And yet, she felt she had time in her busy schedule to tell Mother what for.  Again, altruism is evil.

Walking away from the train wreck is probably the best and safest thing to do.  Perhaps if my Sister had spent more time dealing with her own life, and less time "struggling to understand my relationship with my Mother" (as she put it) she would have had a happier life, as short as it was.  But instead, she spent her adult years as a child, still viewing her life through the prism of her family and parents.  It would be merely a sad story, if it were not a valuable lesson to be learned.  A life unexamined is a life not lived.  But as Twain retorted, a life over-examined is not lived, either.

To some extent we all drive our lives off a cliff, with self-destructive behaviors of one sort of another - smoking, drinking, poor eating, lack of exercise, whatever.  Even if we live "clean" lives, we all end up at the bottom of the cliff, eventually.

The sad thing is, many folks think that driving the car off a cliff is some sort of romantic thing.  Teenagers live by the mantra "Live fast, die young, leave a good-looking corpse" while not realizing the reality of their lifestyle - that fast living while young merely leads to misery in middle-age, not a romantic and dramatic ending.

In the movie, Thelma and her friend Louise decide to drive the Thunderbird into the Grand Canyon, to avoid all the nasty men in their lives and to avoid facing trial for killing someone in what could easily have been argued as self-defense.  In the movie, they drive off the cliff and die a romantic death together.

In the reality version of the movie, the car lands about 30 feet below the cliff, and Louise breaks her spine.  While waiting for medevac rescue, Thelma bleeds to death slowly before her eyes. After months in intensive care, recovery, and therapy, Louise realizes she will never walk again, and be disfigured for life.  She is tried for the murder of the rapist, but is acquitted on the grounds of self-defense.  Too late, she realizes that she and Thelma have made a horribly bad choice, and that the romantic notion of suicide is not what it was cracked up to be.  She spends the rest of her life in a wheelchair, in chronic pain, and regretting the decision that killed her friend and paralyzed her for life.

No wonder the movie ends as a freeze-frame.

In a similar manner, smokers kid themselves that "you have to die sometime" and keep smoking, not realizing that the slow-motion death from cancer is not really very attractive.  Similarly, the over-eater fails to appreciate how having limbs lopped off due to type-2 diabetes is a lot worse than the sudden coronary they were hoping for.

Of course, horrible outcomes like that can be inevitable for all of us - we all have our own messy, personalized death waiting for us in the future.  Intentionally seeking one out seems to be a rather odd thing to do.

But can you save people from themselves?  Could you have told Thelma and Louise not to drive off the cliff?  Could my Sister have "intervened" in my Mother's life and gotten her to stop drinking?

I doubt it.  The best you can do is try to learn from their mistakes and move on with your own life, which is probably messy and self-destructive in its own ways.

Trying to save people from their own folly is an utter waste of time.
Newer Post Older Post Home