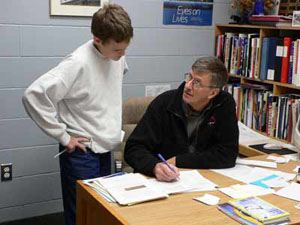 My High School guidance counselor, unlike this fellow shown above, took little interest in his students.


In one of my previous posts, I mentioned how mediocre most high school teachers are, and I am expecting howls of protest from certain quarters.  But before you send off your flame comments, let me elaborate.

I still remember it vividly.  I was called to the school office one day, during my Senior year in high school, and told that I had to go see the guidance counselor, for "career counseling."  I told them that I didn't need that, but they said it was mandatory.

So I went over to see the guidance counselor, and he told me to sit down.

"Robert," he said, "Have you given any thought to your future?"

"Well, here is something I want you to consider," he said, pushing a pamphlet across the table.  The pamphlet said "See yourself in Today's Army!"

"Ah, thanks," I replied, "but I've already been accepted in college.  General Motors Institute.  Are you saying I should change my plans?"

He looked flabbergasted for a moment.  He had me pegged as a stoner/slacker and never bothered to read my transcripts or figure out who I was.  Apparently he never noticed me looking through the college application materials in his outer office the month before.  In fact, he really had no interest in me at all, other than the local Army recruiter would give him $20 for each warm body he could cough up.

He made some embarrassed noises and then said, "well, good luck then!"

Unfortunately, the majority of the staff of my High School was about at that level of operation.  The guidance counselor in my school was really in no position to be advising anyone about anything, given the state of his own life.  And it was clear to me that he really didn't care too much about his job or put much effort into it.

Yes, we had a few dedicated and talented teachers in our school.  A few.  But the bulk were pretty mediocre, which is what you would expect from a government-run facility.  It is hard to get fired, as a teacher, just as it is hard to get fired from any government job.  And as such, these sorts of jobs tend to attract drones - people without ambition of their own, who want a steady place to work with defined duties and few challenges.

For every one exceptional teacher, we had probably 5 mediocre ones and 5 horrible ones.  Gym teachers were the worst.

Unfortunately, a mythology has been created in our society that school teachers are on a par with Mother Theresa.  The teacher's union has done a good job of beatifying the profession, making it seem like anyone who teaches is following an almost religious calling.  Even the TeeVee is in on the gag, with these moronic "The More You Know" adverts, where million-dollar celebrities encourage average schmucks to take up teaching, as if it were a public duty.

Of course, the reality is a little different.  In many parts of the country, teaching is a lucrative profession, with senior teachers making near or over six-figures (the guidance counselor at one local school in New York confessed he was making $75,000 a year - for 9 months' work!).  So much for the myth of the "underpaid teacher".  And the retirement benefits and health benefits are not too shabby, either.

All of that would be worthwhile, if the product coming out the other end were worth the cost.  In terms of education bang for the buck, public schools are not really such a bargain.  Hugh amounts of tax dollars are spent "educating" students, and yet most graduate with no real education, and many are ill-prepared for college.

Of course, private schools are little better.  I spent a year at a private school and was shocked to see that the teachers there were paid less than at public schools.  And while some of them were dedicated and insightful teachers, others were just doing a job that they long ago had lost interest in.  Others were just not qualified to teach.  Our Physics teacher, for example, had just graduated from college and had never taught students before.  Needless to say, we were his learning curve.  In terms of education bang-for-the-buck, it was not much better - and in some ways, worse, that the public high school.

In most school districts, Union Rules dictate that a teacher is paid based on seniority and their level of education.  So the more diplomas you can rack up, the more money you will make.  As a result, many teachers I know spend their summers working on yet another Master's degree, so they can increase their salary level.  How the Master's degree improves their teaching ability is not the point - increasing their earning power is.

This sort of disconnect between income and performance creates situations where people chase after targets (gaming the system) rather than trying to achieve goals.  Wouldn't it be a better use of both the Teacher's time and the government's money to have the teacher spend the summer revising the lesson plan, than attending college?

I think the bottom line, for the individual, is this:  School is what you make of it, and it is incumbent on you, the student, to get the most out of your education, regardless of the nature of your school facilities or the level of teaching staff.

I took the "hard courses" in school, even if I did not always do well in them.  A lot of friends of mine took the "C" level courses and got straight A's, which put them on the "honor roll" in the local newspaper.  Was that really a bright idea, or just an exercise in self-deception?  Needless to say, most of those "honor roll" students did not fare very well in life later on.

Unfortunately, High School has such short days now, and most of that time is padded out with study hall, gym, and lunch, that students learn very little.  And most obsess about social status and the social scene, more than the educational experience, as I noted in a previous posting.

My Great-Great-Great-Great Grandmother taught school in Pompey, New York.   In a description of her class, she recounts how they learned not only mathematics, geometry, basic chemistry, grammar, and other subjects common today, but also Latin and Greek.  In High School.  In a one-room school house, no less.

When I attended High School in nearby Cazenovia, New York, mathematics was optional after the 9th grade.  In a Century's time, a lot had changed.  And in the near half-decade since I graduated, much more has changed, and not for the better.

Sorry to pierce the myth, but high school teachers are not Gods, or even Saints.  Most are just government employees, with every piece of baggage that goes along with that - overpaid, under-worked, unmotivated, and impossible to fire.
Newer Post Older Post Home