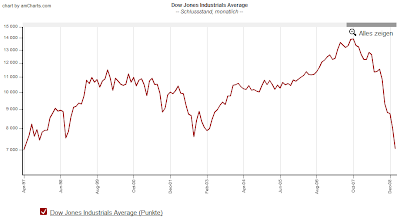 Many folks like to watch the market on a day-to-day basis, encouraged by the moronic reporting on the TeeVee, which touts the ups and downs of the " Dow"  as the pulse of the nation.  You are better off standing back from these fluctuations and thinking long-term.
How closely should you follow the market?  The short answer is, not very.  For most younger people, contributing to their 401(k) or IRA, life is too busy to check their account balances on a day-to-day basis, and since they are investing for the long run, they rarely try to figure out what is going on, other than to read their quarterly or annual Statements.

Yet some folks follow the Dow Jones Industrial Average on a day-to-day basis, as if this somehow made them "more informed" or allowed them to better manage their portfolio.  But doing so is a waste of time - and perhaps a dangerous one.  Trying to time the market or trading based on daily fluctuations is never a good idea - and a good way to churn your account down to nothing in no time.

As I have noted before, so-called "Day Trading" schemes are little more than Casino gambling, and for both forms of gambling, there are idiots out there who will claim you can "make money" this way.  You and I, being rational human beings, scratch our heads and think, "I must be missing something there, how can you make money buying and selling a stock the same day?"

And no, you aren't missing anything.  Compulsive gamblers, of the day-trading variety or the casino variety are total idiots.  Just walk away from people like that, as they are nothing but trouble, and will, like clockwork, eventually hit you up for money after they have gambled all theirs away.

There is money to be made in gambling - if you RUN a Casino, or you SELL a "Day-Trading System".  But otherwise, it is just a game for chumps.

I have checked the balance on my E*Trade Account a few days in a row, now.  What is interesting is that the account balance can vary by several thousand dollars a day, and a stock that is "up" one day can be "down" the next.  Oftentimes, these pricing variations are due to events in the news (North Korea attacking South Korea, for example) or due to quarterly profit reports, a company getting a lucrative contract, or whatever.  Or it could be just that someone decided to sell a lot of shares one day, which depressed prices, or someone else decided to buy, inflating prices.  For small cap companies, this latter effect can be huge, which is why the con-artists out there are always trying to get your to buy penny stocks.

Taking a long view and not micro-managing (or churning) your own investment accounts is a far better approach to investing than checking things on a day-to-day basis.  If you over-manage your investment accounts, there will be a temptation to "do something" to prevent losses, or do something else to obtain gains.

Usually, this means people selling stocks that are taking a nose-dive and then buying stocks they see on the rise.  This is the classic case of Buying High and Selling Low and a sure way to go broke in no time.  As I have noted previously, a lot of very stupid people panicked during the crash of 2008 and sold all their stocks and bought bonds, on the premise that they could not "afford to lose any more!"

But of course, the market recovered within about a year - to its previous levels.  The rest of us who held on to our investments, got most of the losses back.  Those who panicked and sold, locked in their losses and are now only half as wealthy as they once were.  Fear and Greed - what drives the Stock market and what causes the "buy high, sell low" mentality.

When you retire, you have a lot more time on your hands, and the temptation is to start managing your investments more closely.  But again, other than long-term strategies, you should not be thinking of buying and selling individual stocks or funds based on the day-to-day or week-to-week operation of the market.

And yes, I am aware that all the financial shows on TeeVee advise just that - often shouting at you to buy or sell such a stock as if you could create wealth this way.  Usually it doesn't work out, other than for the trading firm, which collects fees on every trade (the house always wins, no?).

A better approach, when you reach retirement, is to think about your long-term goals and security.  By age 65, you should have earned all the money you need to retire.  You should not have to rely on market returns to fund your retirement at that stage in life, although many people do.

The long-term strategy is to take money from risky investments, as you get older, and put them into risk-free ones.  So, for example, when you withdraw money every year from your 401(k) or IRA, as you are required to do, put some of it aside into a government backed security or other instrument where the principle is guaranteed not to decrease in value.

Stock picking, on the other hand, is just legalized gambling.  And while some people claim they make money at it, for the most part, people lose money - often a lot.  Like gamblers, most live in denial, remembering the big wins from their trades, and conveniently forgetting their huge losses.

I have a number of friends who have tried to "play the market" with various schemes, from day trading, to futures investing, to short-selling.  In all cases, they ended up in fairly serious financial trouble down the road, even after some initial successes.  Age 70 is not a fun time to be starting over in life, to be sure.

There Ain't No Such Thing As A Free Lunch.  Yes, there are people who "make it big" in the stock market, and they are basically just lucky - but believe their luck to be some sort of insight into the market.   This is unfortunate, as it leads them to make bad decisions later on.  The fellow who pulls the handle on the million-dollar slot machine doesn't believe he knows anything more about slots than anyone else, but a stock picker will tend to think his rewards are a function of his skill.  (Note:  There are some people who do believe that there is a technique to playing slots, which are just raw probability machines.  We call these people idiots.  They flunked math).

And that is the problem with stock picking.  You make some good choices, and you start to think you are a genius, and that is dangerous thinking.

Back in 2009, I bought Avis stock for 74 cents a share, when the market tanked and rumors abounded that they were teetering on the brink of bankruptcy.  The stock rebounded in six months - by 1600%, netting me over $10,000 for a $750 investment.

Am I a stock genius?  Hardly.  If you bought nearly any stock back in February 2008 (other than GM, Fannie Mae, Bank of America, or Fleetwood Enterprises, all of which I also bought) you would have made money.  Those other stocks I mention, they too, teetered on the verge of bankruptcy.  Some went, others didn't, but they all tanked.   No, I am no "genius" - my "stock pick" of Avis only offset my losses in other other stocks.  Never confuse getting lucky with being brilliant.

A little humble pie is a good diet for any investor - on a regular basis.

One of my best investments, I made by accident.  I was trying to buy stock in the company that makes Morningstar Farms products, which of course, is Kellogg.  Instead, I ended up investing in a company called Morningstar, which ironically, provides investment advice and software for investors.  It has done remarkably well, increasing in value by over 50% (I sold my original investment amount, and kept the rest, a practice I usually do when a stock spikes upward).  Kellogg, in contrast, has gone up only about 2-3% in the same time period.

That's pretty embarrassing to admit, but it illustrates the Monkey-and-a-Dartboard effect of the market.  As reported regularly in the press, randomly picked stocks often end up doing better than market guru's picks, over time.  You are better off just picking stocks at random, than to listen to the shouting guy on TeeVee, although I would not recommend either.

So.. don't obsess about the day-to-day fluctuations in the market.  Diversify your portfolio, put an increasing amount of money into "safe" investments over time, and don't try to time the market on a day-to-day basis.  For the small investor, that's about all you can do.
Newer Post Older Post Home