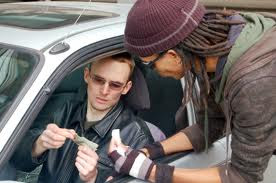 You would think drug dealing would be a profitable pastime.  You'd be wrong.


When I was a kid, my older Brothers and Sister thought it would be a good idea to introduce me to the world of drug use.  It was not really a good idea, and what sort of idiot gives pot to a 13-year-old kid anyway?  It was, in retrospect, a bad decision that affected my entire life from that point onward.  I am glad I gave it up, but I can never take back those 10 years of my life.  Nor can I reverse the long-term affects the drug has on your psyche.

One thing about smoking pot or doing any other illegal drug (or legal one, either, and that includes alcohol) is the staggering cost involved.  When you are an unemployed teenager, scraping together enough cash to buy pot is pretty difficult, even back in 1972, when "Mexican" was selling at a market price of $20 an ounce, and more potent "Colombian" was selling for maybe $40 an ounce.  More esoteric forms of pot, such as Thai Stick, Hawaiian, and the like were rarely found or still on the horizon.

One way to offset the cost of using marijuana is to sell it, which of course is a path fraught with risk, as a stoner friend of mine found out the hard way.  Not only does selling drugs end up getting you into severe legal trouble, it also doesn't net you much money.  The profits, what little there are, usually end up going "up in smoke" as they say.  No matter how hard my friend tried, there were never any big profits in selling pot - no stacks of 100 dollar bills or suitcases full of money, as they show in the movies.

In fact, economists have commented on this phenomenon.   The average street-level gang drug dealer makes little more than someone working a regular job, but with a lot more attendant risk involved.  Most drug dealers live with their parents and are hardly rich.  Interestingly, like a law firm scenario, most dealers work at the trade hoping for future riches (promotion to gang leader) just as young Associates hope to someday make Partner.

As I noted in my Marijuana Trap and Marijuana Trap, Part Deux, postings, many users feel that "if only" the drug were legalized, the costs would drop down significantly.  However, a quick search online reveals that so-called medical marijuana is staggeringly expensive in most cities - on the order of $1000 to $4000 per pound, or several hundred dollars an ounce.  It is hardly an "affordable" drug at these rates, but rather expensive.  In fact, the only drug dealers who appear to be making money at the trade, are those engaged in the medical marijuana trade, as they have cut out a lot of middle-level dealers.

The conundrum as to why medical marijuana is so expensive is an interesting one.  Despite its illegality, the market seems to have selected a market price for the drug, one that reflects relative demand and value, rather than cost of production.  The delta for the risk-taking associated with its illegality apparently does not add much to the overall cost structure.  Medical marijuana producers have priced their drugs not far below "street-level" pricing, even though the cost of producing the drug should easily produce a 10X or 100X reduction in costs - or so one would think.

And it is not like Pfizer has the Patent or anything.  Medical marijuana is the ultimate "generic" prescription drug.  It should be cheap.

But why do illegal drug dealers not make a lot of dough at their trade?

Part of this is probably due to the fact that for most street-level dealers, the margins are slim.  Back in the 1970's, organized gangs of drug dealers were a rarity.  On most college campuses or in most high schools, you would find pot and other drugs, not from professional dealers, but from fellow students and friends.  It was sold on a friend-of-a-friend basis, perhaps the earliest example of a successful Multi-Level-Marketing (MLM) scheme.  One would buy pot from a friend, who in turn, bought it from another friend (and diluted or "stepped on" the product in the interim) and so on up the line.

At each stage in the transaction, the price would be padded and the product diluted.  Like a Japanese electronics distribution network of the 1970's, there were a lot of people involved, from importers, to regional distributors, local distributors, other intermediaries, and then finally the street-level dealers, which in turn lead to a padding of the prices.  There were no chain stores or "Best Buy" for pot back then - or even today.

A note to Pfizer:  Perhaps this is a marketing opportunity to get in on a prescription drug with a high mark-up (if you'll pardon the pun).  Just a thought.

In the 1980's, the emergence of the city street-corner drug dealer occurred, tied hand in hand with the prevalence of cocaine and also crack cocaine.  Suddenly, kids no longer bought pot from friends, but drove to the city to buy it from inner city youth.  In any major urban area, there are districts, usually minority districts, where suburban white youth drive to, in order to obtain drugs.  Many black youth have reported they are incensed by being asked to sell drugs on the street by outsiders, who "just assume" that because someone is Black and lives in the inner city, that they sell drugs.

This change in marketing lead to a great increase in gang activity and the associated violence that accompanies gang activity - as well as violence and gang activity by suppliers across the border in Mexico and in other countries.  In a neat mirror to the excesses of prohibition, the "drug wars" have served only to create an underground economy and empower organized criminal gangs.

Such gangs have made money from the drug business, unlike the intermediaries in the basic drug transactions.  Street-level dealers, smuggling "mules" and other low-level workers rarely make much, if anything from their efforts (some "mules" are drafted into the job under threats of death or harm to family members, and receive little, if anything, in compensation).  As a result, the drug business has become big money - but only for a select few at the top.

My stoner friend's attempts at drug dealing fell far short of that of the narco gangs.  Partnering with a buddy, they bought a quantity of marijuana and LSD, which they unwisely kept in a locked glove box in my friend's car.  His partner kept the key, due to the all-too-understandable fear that my friend would tap into his profit base for recreational use.  Of course, the entire scheme came undone when my friend was pulled over for a traffic stop, and, well, the inevitable happened.

With the legalization or quasi-legalization of marijuana through the medical marijuana movement, one would think that these issues would become a thing of the past.  It is not difficult to obtain a "prescription" for marijuana under a number of pretenses from a friendly doctor, and then legally obtain the drug from an outlet in a number of States.

However, the cost of the drug still remains very high.  As I noted in an earlier post on the subject, one dispensary has a Facebook page for its colorfully named wares.  What was interesting about the page was the postings from the users, who often lamented that they could not afford to obtain their drug of choice, even legally as medical marijuana, as it was too costly and they were broke.

So....wait for it.... I am sure that the next thing you will hear from marijuana users is not only should the drug be legalized, but subsidized as well.  For pot smokers, the oppression never ends, does it?

The cost of the drug is fairly high, as although it may grow as a "weed" in the wild, tending and nurturing the plants to produce potent varieties and resulting buds, takes a little more care and time than merely throwing some seeds in the ground and watering them.  The cultivation of marijuana for drug use can be a time-consuming, labor-consuming, and energy-consuming process that involves a lot of expensive equipment, fertilizers, and the like.

The long and the short of it is that pot will remain elusively expensive for its users, as the price will never come down to the price of "a pack of cigarettes" (or conversely, the price of cigarettes has risen to that of pot, and people still smoke those!).  Compounding this pricing problem is that most pot users, being chronic underachievers (as well as "chronic" a lot of things) never will be able to scrape the dough together to do little more that "get by".  Pot will always be expensive to the pot user, it would appear.

UPDATE March 2015:  Now that marijuana is legalized in more than one State, the price of the drug has.... not gone down.   In fact, in Colorado, they are saying that illegal drug sales still account for about half the traffic, as the price is lower than at a "legal" dispensary.

When you don't have to pay taxes, any enterprise can be profitable.  And for folks at the top of the drug distribution chain, there are a lot of profits - that are tax-free.   The only problem they have, of course, is in laundering all this money.  For the street level dealer, lowly mule or whatever, the big money never materializes - just the big jail sentence.