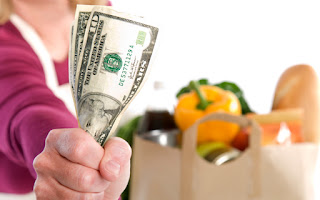 
Once you are debt-free and own your own home free and clear, and you are totally out of debt, your remaining budget items are fairly limited:

This is what retirement will look like.  Suddenly, food can become a large part of your budget.  What is a reasonable budget for food?  It is hard to tell, as costs are all over the map, and it depends a great deal on what you eat.  You can eat very cheaply if all you eat is rice or cheap pasta dishes.  But such carbo-centric meals are not very healthy, of course.  And as a result, you tend to notice that poor people tend toward obesity, as they buy a lot of starchy and sugary foods, which are cheap.

Gourmet and specialty foods are fairly expensive, as are flavorful foods.  Sauces and spices are not cheap, so if you like bland (ugh!) you end up spending less.  Compounding this problem is that many people don't really track their food purchases, so they tend to under-estimate what they spend and thus under-report their food spending.

People may say they spend "only  $100 a week" at the grocery store, just as they say they pay off the balance on their credit cards every month.  But we know better, don't we?  People lie - mostly to themselves.

And the statistics out there are not very helpful.  The Bureau of Labor Statistics has some data, averaging food cost per reporting "consumer unit".  However, these "consumer units" could be anything from a single person to a family of eight.  So the data is not really helpful for the individual, but might be useful for people tracking spending from the meta view.  This link, has a visual view of that data.

By the way, when you wake up tomorrow morning, take a good look in the mirror and then say "Good morning, Consumer Unit!"  Yes, that is how the Bureau of Labor Statistics views you.

The Bureau of Labor Statistics data also appears to be self-reported as well, so the data may be highly suspect.   People will under-report their alcohol purchases, lest they appear to be a lushes.  $457 a year doesn't buy a lot of light beer, does it?

Some couponing sites have self-reported spending data, but this is also suspect.  I find it hard to believe, for example, that you can feed a family of four very well on $200 a month, as one poster on that site claims.  That works out to $1.67 per day per person, or about 55 cents a meal.  If this person is being honest, they are the most efficient homemaker on the planet!  However, they may be realistic in this self-reporting if most of their meals are taken out at restaurants (and thus not counted toward the "grocery" budget).  So they may spend "only" $200 a month on food at home, and $1000 a month at Applebee's.

And that is a problem right there - many people separate (mentally) their grocery and their restaurant budgets, and thus congratulate themselves for spending little on groceries, when they are eating out five nights a week at chain restaurants.  They are easily spending 5-10 times as much on restaurant food as home cooking.  And as the Bureau of Labor Statistics numbers show, most Americans "consumer units" spend as much on restaurant food (if not more) than on groceries.

I have been tracking my spending using Quickbooks since January 2009.  While the data might not be accurate to the penny (many cash transactions are not entered, and there may be some transactions that are mis-classified, it is an ongoing effort!), the results do produce some startling data:

Some observations here.  First, in 2009, the shit was really hitting the fan, economically, and we cut way back on spending.  In 2010, things seemed to be looking up (or we lost the discipline to cut back on spending) and expenses increased.  The increase between 2009 and 2010 may also be due to better tracking of expenses, as well.  Note also that the restaurant expenses do not include deductible business meals (which are only partially deductible, and a deduction is still an expense!).

A second note is that our grocery spending is above the average "Consumer Unit" reported by the Bureau of Labor Statistics, and far above the data self-reported on the couponing site.  However, couponers are more likely to be people scrimping to get by, so it is not surprising we spend more.  And we tend to buy more upper-end foods, even at Wal-Mart (which has a fine selection of food, even gourmet and specialty items!).  We also eat out less in restaurants than most people (maybe once or twice a week, at most) so we spend less there.

We also traveled more this year, by car, (as opposed to the RV) and ended up eating in restaurants more, hence the increase in that budget.

Our liquor budget is staggering - almost 10 times the Bureau of Labor Statistics average.  There are a number of reasons for this.  First, we drink a lot.  Second, our friends all drink a lot.  Third, we do host a number of parties where a lot of alcohol is consumed.  Fourth, we used to buy a lot of expensive wines from local wineries when we lived in Central New York for the summer ($20 to $40 a bottle) instead of more prosaic but serviceable wines, such as the "Oak Leaf" line from Wal Mart ($2.97 a bottle!).  And our scrimping last year is reflected in the liquor budget.  In 2009, we bought far less booze from local wineries and more from discount liquor stores.  In 2010, we went back to buying local wines, often costing $300 a case or more.  It is a habit that we will probably break, now that the house in Central New York has been sold.

The point of this blog is to live well on less, not to scrimp and sacrifice and live like a monk.  So "saving money" by eating bland piles of pasta or drinking cheap lite beer or eating at McDonald's is not in the cards, unless we were forced to do so by circumstance.  However, it is possible to shop more carefully on price and quality, obtaining the same goods for better prices, by going to wholesale outlets or to Wal-Mart, rather than to "boutique" grocery stores.  And not every bottle of wine need be $20.  Table wine, for daily consumption, can be more prosaic.

Of course, for many people, there is little choice in the matter.  They live on Social Security, Welfare, or food stamps, and have to feed a family on a mere pittance a day.  This blogsite, for example, attempted to feed a family of four on $227 a month in food stamps - and still provide nutritious food.  I am not sure that can be easily done.  The only way to get enough calories on such a limited budget is to go with cheap carbs and other badly balanced diets.  That's a lot of ramen noodles, my friend!  A budget like that assumes you can make three meals a day, for four people, for 63 cents a meal.  That is a very thin budget.  Even the USDA doesn't expect people to do that, but instead assumes the recipient will supplement that with $300 of their own money, for a monthly budget of $527 a month for food.

Last year, our food and beverage expenses averaged about $900 a month.  This year, they have jumped to $1200 a month, mostly because of increased liquor costs and increased restaurant spending.  Our goal for 2011 will be to get that number back down  below $1000 and then see how much lower we can make it.  If we can save a couple thousand dollars a year, that means more money for retirement, and also the ability to live on less when we retire.

To accomplish this, we are going to set up a separate checking account (with debit card) just for household food and beverage spending (and restaurant meals).  We will fund this account by $1000 a month, and my partner will track the expenses in Quickbooks.  It will be a good learning experience for him (someone has to balance the checkbook if I die) and it will force us to think about food spending more closely.  In this manner, we will know right off the bat if we are going over our budget or not.

What is your food budget?  Do you track these expenses on Quicken or Quickbooks?  If not, I suspect, like the ladies on the couponing site, you may be deluding yourself in terms of actual spending.  Many people, like the lady who posted she feeds a family of four for $200 a month, might be deluding themselves if they are not including all spending, including cash purchases at the local 7-11, various grocery trips for quarts of milk, and the like.  It is easy to say "Well, the last time I was there, we spent a couple hundred bucks, so that must be what we spend a month" when in fact, it is what you spend a week or every other week.

Again, the only way to find out is to TRACK IT.  And if you are ever, ever, going to be financially free and independent, you need to figure out where you money is going - and why.  Once you can do that, you can live a better life on less money.