Compact Fluorscent Bulbs - are they worthwhile? 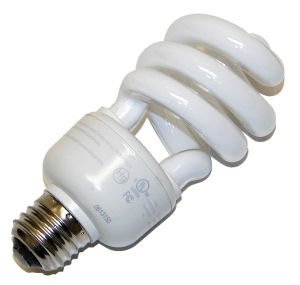 Compact Fluorescent Bulbs are indeed cost-effective, but the light they provide can be quite annoying.  These bulbs are little more than a stop-gap measure until LED bulbs become more popular.  Myself, I am waiting for LED technology to mature rather than invest in these bulbs.
A move is afoot to eliminate the incandescent bulb.  By 2014, it may be hard to find incandescent bulbs, except in specialty sizes and shapes.  And the cost may be so high that you won't want them even if you found them.  Is this a bad thing?  Perhaps not.  Compact fluorescent bulbs are being pushed as the alternative to incandescent bulbs, but they are not a real, long-term solution, merely a stop-gap measure.

Compact fluorescent bulbs (CFL) are being maligned on some right-wing websites as another example of environmental extremism gone awry.  The myths being spread are that these bulbs, when broken, will require a HazMat team to clean up.  This is, of course, not true.  But the bulbs, like any fluorescent bulb, do have bad stuff inside them, and just as you would not go around snorting the white powder inside a 48" fluorescent bulb, neither should you bathe in the gunk inside a CFL bulb.

LED technology is poised to replace the CFL bulb in short order, which is one reason I am waiting before I buy any new bulbs.  Unlike CFLs, LEDs don't contain toxic mercury.  They also last longer (potentially a lifetime) and can be made in any hue of light.  In fact, it would not be hard to program a bulb to make light in adjustable hues for different applications.  And LEDs will use far less electricity than even CFLs.

But are any of these alternative bulbs a good deal?  Like anything else, you have to "do the math".  Often, just using less light is a cheap and free alternative to switching bulb types.  And yet most of us "burn" the lights all day long without thinking about it.

Now look at some homes out there and you will see several lights on such sensors or timers.  I know some folks who have those 600 Watt halide street lights (always so pleasant and attractive) mounted on a pole outside their house.  The cost of such a light could be over $200 a year in electricity, and yet many of the homes where such lights are installed are often little more than trailers.

More insidious than such dawn-to-dusk lights are the parasitic lighting in your house, often switched on and left on, even when it is not needed.  For example, just now, I switched off the compact florescent lights in my office and opened the window shades.  There is more than enough ambient light from outside to work. Savings?  Not much, maybe 14 cents a day. But over a year, that is over $50 in electricity.

Compact florescent lights (now available in warm white) can cut electrical use in half and LED lamps promise to be even more efficient. And both generate less heat, a big factor when you are paying to cool your house as well.

If you replace incandescent bulbs with compact florescent lights or LEDs, and use lights more sparingly (turning off unused lights when not needed, installing motion sensors for lights such as in garage areas) you can easily cut a dollar a day off your electric bill. Doesn't sound like much, does it? Yet your electric bill probably comes to about $6 a day, and a dollar cut from that represents a 16% savings in electricity.

So yes, there are real savings here - potentially hundreds of dollars a year - enough to make changing habits and changing bulb types worthwhile.  Since the bulbs last longer, the cost of the bulb ends up being about equivalent to that of the numerous incandescent bulbs it replaces.  The only downside is that many of these have very poor lighting characteristics (too blue) unless you are willing to pay extra for the warmer-white versions.  They also may be difficult to dim effectively.

Getting in the habit of turning off lights or installing motion sensor switches can save even more. A motion sensor switch can be had for $15 or so from a home improvement store and can pay for itself within a year in terms of energy savings. I just installed one in my garage, where the multiple florescent lights tend to be turned on and left on for hours at a time, even when no one is in there.


As noted above, one of the biggest wastes of electricity is when lights are left on when no one is in a room.  Motion sensor light switches and fixtures can sense when movement occurs in a room and switch on the lights, and then turn them off after a predetermined time period.  I did the math on this once, and the cost of the light switch (usually less than $10) is far outweighed by the savings in electricity, particularly for rooms with multiple bulbs.

For example, in one room in my office, we had ten 40-watt fluorescent bulbs, which represents 400 watts of electricity, which, at ten cents per kilowatt-hour, runs about four cents an hour to run.  if these are left on 10 hours a day, this comes to about $60 a year, for five working days a year, for 52 weeks.  If the room is only used 2 hours a day, a motion sensor switch will "pay for itself" in short order, if it costs only $10 or so and cuts your electricity use on that circuit by 50-80%.

However, this analysis assumes that the switch is installed for free (owner-installed).  Obviously, if you have to hire someone to do the install, the analysis changes accordingly.
Newer Post Older Post Home