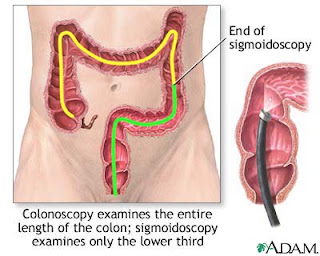 A colonoscopy is never fun.  Paying for it, even less so.

"Can I get a discount for paying cash for my colonoscopy?"

You'd think so, wouldn't you?  But ironically, paying cash in advance is the most expensive way to go about paying for medical services, even though it is the most secure for the doctor or hospital.

About 10 years back, when I had my first colonscopy, I called he hospital and said "how much is this procedure - I'll pay cash!" and they told me it would be about $4000, which was a staggering number to me at the time.

They suggested I go though my health insurance plan.  This required that I go to my regular doctor, get a recommendation for a specialist, and then go to the specialist, who then ordered the procedure.

At that time, I had a very lucrative plan, and it cost me little.  But all that runaround surely cost the insurance company money, which in turn lead to higher premiums.

This last time I had it done, I went to a digestive specialist again (after a referral from my regular doctor).  He had his own imaging center next door.  Total "retail" cash cost was over $2000, which was far less than at the hospital - and shows that doctor-run specialty practices like this can save money.  But my high-deductible Blue Cross plan knocked this down to a negotiated price of about $1200 overall.  The plan deductible ($10,000) was not met, of course, but the pre-negotiated Blue Cross prices kicked in, saving me a LOT of money.  $1200 is far more affordable than $2000.

Like so much else in the world, medical billing is very elastic, with various levels of pricing for different customers - the same way the airlines sell seats on a plane - no two are priced alike.

Paying cash is the worst way to go and the highest price imaginable.  It would be like going to the airline ticket counter on the day of the flight and paying cash for a first-class seat.  Be prepared to pay a lot!  Having insurance - even a high-deductible policy - gives you much better "cash" pricing.

Frankly, I think this is a scandal.  People should not pay different prices for the same services, when it comes to medical needs.  And the poor and minorities are the ones most likely to be paying cash - and getting screwed as a result.

Why do we allow this to occur in our society?  The rich get richer and the poor get poorer.

And as a result, poor people, when hospitalized, are presented with staggering bills.  If I get into an accident and have to go to the hospital, even if the injuries are about $20,000 overall, chances are, the pre-negotiated prices Blue Cross has will reduce these to $10,000 or so - below my high-deductible limit.  I still have to pay $10,000, but that is a lot less than $20,000.

Now consider the poor person who "can't afford" health insurance.  They get socked with a bill for $20,000 with no discounts, and as a result, probably faces bankruptcy.  Does this seem rational or fair?  Scenarios like this are one reason that medical bills are the largest cause of bankruptcy in the USA.

Perhaps it is time we rationalized medical billing and pricing.  There is no reason that one person should pay more than another - particularly when the person paying more is the one least likely to afford it.

But this scenario illustrates why it is essential to get even a cheap, high-deductible plan.  For many folks, particularly younger people, you can get such a plan for less than the cost of your monthly cable bill.  Mine started at $85 a month, at age 45 and has steadily escalated to $230 at age 50 (and will no doubt go higher).  But for someone in their 20's or 30's, such policies could be very, very cheap indeed.

Medical Savings Account (MSA) plans are an interesting gimmick, and I tried them in the past.  These plans allow you to put aside money, tax-free, like in an IRA, to pay for medical bills.  This money rolls over from year to year (unlike the old 'use it or lose it' plans) and you can thus "save" for medical emergencies.  If you don't spend the money, you can then use it at retirement.  It not only allows people to save for medical emergencies, it provides them with tax-free money for that purpose.  Plus, it puts the consumer in the driver's seat, in terms of pricing of medical services, thus encouraging them to shop around on price for routine medical procedures.

The only problem was, the cost of coverage was higher than my stripped-down Blue Cross plan, as the insurance company had to manage the MSA account as well.  So while in theory MSA's make sense, in practice, they have been hard to implement.  Congress thought that MSA's were such a big give-away that they initially limited how many people could participate in them.  I strongly suspect that the insurance and medical industries were also against these plans from the get-go, as the disconnect between medical costs and the patient are the number one cause of skyrocketing health care.  Putting the patient in the driver's seat, in terms of controlling health care costs would be disastrous for the industry.

How health care will play out in the next decade will be interesting.  The health care reforms, while flawed, were at least a start.  Perhaps minor tweaks or major overhauls of the system will improve it.  But the bottom line is, health care is expensive, and having some sort of plan in place - any kind of plan - is essential to your financial well-being.
Newer Post Older Post Home