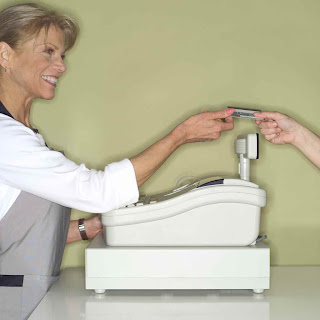 Many of us will have a second career before we retire.  Chances are, it may be in a field that pays far less that the field we are in now.  Learn do say " Would you like fries with that?"  as it may come in handy.  Don't act all surprised when it happens, either.

On National People's Radio this morning was another left-wing sob story about how bad the economy is.  When the history of this decade is written, it will be noted that the far left was more instrumental in the destruction of the Obama Presidency than the far right.  It seems that to lefties, Obama can do no right.  This is a shame, as he has done a decent job, and people on the left should support him.  But they don't.  Folks like that are never, ever happy.

Anyway, "Renee Montagne", who giggles when she talks,  cheerily reported about some 50-year-old slug from California who is unemployed after having a six-figure salary job for a number of years, flying around demonstrating telcom products.  He is whining that no one is offering him six-figure salary jobs, and moreover that as a 50-year-old who has been unemployed for two years, employers are shying away from him.

As I noted in my previous entry, you should never expect that "dream job" to last until you retire.  And age 50-55 is a good time to be laid off from such jobs.  And as an older employee with high health care costs (and unreasonably salary expectations) you should fully expect that you find it very hard to get work in your chosen field - ever again.

Ever again.  Read that a few times and let it sink in.

Older employees are not an "asset" anymore.  The fellow in the NPR piece has an Engineering background, as do I.  But the prospect of either of us being hired as Engineers anywhere is nil.  Once you are out of that game for more than a year or two, you are lost.  And as older employees, our skill sets may be antiquated.  Engineering is a young man's game.  So forget your creaky credentials and your yellowed diplomas.  You can't compete in the fields you originally set out to work in.

And forget that big-ticket job you had when you were at the top of your game.  It just ain't gonna happen, when there are starving college graduates willing to work for 1/4 your salary.  This is sad, but I see it all the time, people laid off at age 55, laying around the house in their bathrobe, complaining that no one will hire them to be VP of Marketing (the last job they had) at $125,000 a year.  Must be the government's fault!

And we should all expect and plan that something like this can and will happen to us.  How do you plan for this?  Simple.

1.  Put money aside - a lot of it.  If your are making a six-figure salary, there is no reason you should not be maxing out your 401(k) plan and also putting money into after-tax investments.  No reason.

2.  Get out of debt, stay out of debt.  Pay cash for cars and other purchases, make a plan to pay off your mortgage long before retirement.  Debt is not a "normal" condition, and you should not be incurring new debts after age 40.

3.  Learn to live on less. Most folks, when they make $125,000 a year, spend $150,000 a year.  There will always be more money, they think, so they spend, spend, spend.  When it all goes horribly wrong, they have no savings to fall back on, and retirement is a decade off.  Learn to live on the salary of someone making half as much as you do - and then use the rest to pay down debt and increase savings.

These are hard, hard things to do, to be sure, as we are bombarded with messages to the contrary in our society - spend more, increase apparent wealth and status, impress people we don't know.

So what happens if you are in your 50's and laid off from that high-income job?  Well, try to find a similar job, if you can.  But don't be surprised if it doesn't materialize.  Getting a job in your 50's isn't easy, and oftentimes people in this situation NEVER find employment in their same field, or at the same salary level.

And by the way, getting a job in your same field at the same salary isn't some sort of inalienable right.  So get over that, please.

Chances are, you will have to start a second career, doing something else, probably for a lot less money.  And a good way to start on this is to cut back on expenses immediately.

I've seen people who were laid off at 55 continue to spend as if the money were still coming in, often tapping into retirement accounts to make mortgage payments and "keep up appearances."  This is nothing short of suicide, frankly.  Once you've run through your retirement savings, you'll still owe on that mortgage, and still be unemployed.

And all for foolish pride.

I was fortunate as I saw this scenario happen to my Father back during the last big recession in 1979.  Laid off at 55, he never found work as a VP/manager of a manufacturing company.  People would rather hire someone younger and cheaper, and let's face it - manufacturing jobs were getting scarce even back then.  He never found work, really, after that, and instead retired early.  He was fortunate to have enough money to retire early and retire comfortably.

The lesson for me was never to take a job or career for granted.  In my own life, at age 50, I can see where this could happen to me.  Business in my field is stagnant and prices are in decline.  It is harder to make a living in Patents than it used to be.  Many of my friends, living the six-figure lifestyle, argue at the "unfairness" of it all.

I saw it coming, put money aside, paid down debt, and cut expenses.  I can afford to work less and live on less and do well.

It does take some foresight, though.  Not many people can figure that out.  See my posting on the Three Types of  Learning to see what I am talking about.  Most people cannot learn except from what happens to them directly.  Learning from the experiences of others is a very powerful tool, and yet few people use it.

Learn from the mistakes of others - take action now - rather than wait until it happens to you!
Newer Post Older Post Home