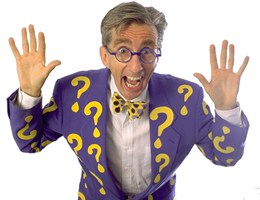 The idea that you can get something for nothing pervades our society, and is the cause of much misery to people, on a personal level.


The picture above is of scumbag ordinaire, Matthew Lesko, who runs informercials and sells books that tout the idea that "everyone" is getting free money from the government, so why not you?

Lesko's books (and there are a LOT of them) have made a lot of money for Lesko, but the idea that there is a ton of free government money out there for the taking is, well, to say the least, overstated.

Yes, you can go on welfare or collect food stamps.  But you have to qualify.  And in order to qualify, you have to be poor.  A friend of mine told her grand-daughter to apply for food stamps while she was in college.  The girl went down to the welfare office, and after nearly a day of waiting, filling out forms, and talking to government clerks, was told that she would qualify for $10 a month in food stamps.  And since then, her income has risen to the point where she no longer qualifies for that.

And yes, there are Pell grants and other types of student aid out there, but for the most part, these are available only if you are a student - and the money is usually paid directly to the school you are attending. You can't just show up and have them hand you a basket full of money.

Other government programs are out there that grant money for an extraordinary variety of activities.  But usually, you have to do something in return for this money.  So yes, you can get a National Endowment for the Arts grant for doing something artistic, but you have to be a bona fide artist and actually do something in exchange for the money.

The list goes on and on, but the bottom line is, there is little in the way of "free money" from the government that you are missing out on.

And in a way, Lesko is no worse than any of the self-appointed "financial gurus" like "Sooze" Orman, with her books, seminars, and TeeVee shows, that promise to make you wealthier, or at least "approve" you for the purchase of a new SeaRay or Buick.  People get rich selling books telling people how to get rich.  You make everyone $39.95 poorer, and yourself a LOT richer in the process.

So how do the Matthew Leskos of the world succeed?  Well, many people like to believe in easy answers - that you can accumulate wealth without working, you can make something for nothing, transmute tin into gold, create a carburetor that causes a car to get 100 mpg, or get "free money" from the government.

And in many cases, serious con men use this sort of lazy thinking to their advantage by selling "money system" seminars or various sorts of investment schemes and cons.  Or they get you to believe that your invention will make you a million bucks without any effort on your part.  The common denominator is that you can create wealth from nothing, and everyone else is doing it, and you'd better get in on it before you "miss out"!

People like Lesko might ding you for the cost of a book, and nothing more.  So you don't get too badly hurt there.  And perhaps if you learn from that mistake, his book might actually be instructive.  But I think for the most part, the "true believers" keep searching, like Diogenes, for the "real deal" even when they have been scammed over and over again.  And then send off larger sums of money to con artists and flim-flam operators and get ripped off for more than the cost of a book.

These are the sort of folks who "invest" in an MLM scheme, get ripped off, and then invest in yet another one, which advertises itself is "not just another MLM rip-off scheme!"

These are the sorts of folks who answer ads online about how you can buy "Gov't seized drug vehicles for $50!" thinking they are going to get a blinged-out Mercedes for fifty bucks.

Or the sort of folks who answer e-mails claiming that unclaimed monies are laying about in their name.  Give us a processing fee of $100 and we'll get that check right off to you!

Or worse, the idea that a Nigerian Oil minister has millions of dollars he wants you to handle, for a minor processing fee of a few thousand dollars, in advance, please.

In short, they are the raging "true believers" who are willing to suspend disbelief on a daily basis and hand over their paychecks with blubbering thanks to the first slick-looking con man to come into town.

And as a society as a whole, it has a corrosive effect.  As one commentator noted, promoting this idea of "free money" from the government serves to foster the mentality of dependency on the government, or to look at the government as a source of largess and swag.  It is that sort of 'bread and circuses' mentality that lead to the downfall of Rome.

And increasingly, our country is becoming dominated by people who believe these sort of sweet lies.  Chelsea Clinton's father-in-law was recently convicted of fraud, after he stole money from his clients to make up for losses in a classic Nigerian scam.  It is hard to believe that college-educated, upper-class people fall for this sort of thing, but it happens.

In short, cons and scams are no longer just the purvey of the trailer park set, but have gone mainstream.  And in part this is because more and more Americans are buying into something-for-nothing.

I know of at least a dozen people who buy into the idea that you can "make money at gambling" (or at least that having a compulsive gambling habit "isn't that bad").  And I know many middle-class or upper-middle-class people who have fallen hard for day-trading stock schemes.

For these folks, it is not enough that their income or wealth places them in the top 10% of the United States - or top 1% of the world.  No, they want more - they want the "free money" that everyone ELSE is getting in on.  So order today and get your stock trading kit!  The casino boat is sailing, and every night there is a sure winner!

And oftentimes, these folks end up pissing away a lifetime of work - money that took painful years of hard work to accumulate is squandered away in get-rich-quick schemes.

This is sad, in a way.  The idea of succeeding through hard work, thrift, saving, and investing has been supplanted by a lottery mentality - or a mentality that everyone is "entitled" to riches without work, and all we need do is petition the government for it.

Perhaps there is not much you and I can do to change this mentality in the world.  But on a personal level, you can protect yourself by not falling for it.  Living in reality can be harsh and difficult, to be sure.  But when you succeed in reality, as opposed to living in a fantasy world, you end up much happier in the long run.
Newer Post Older Post Home