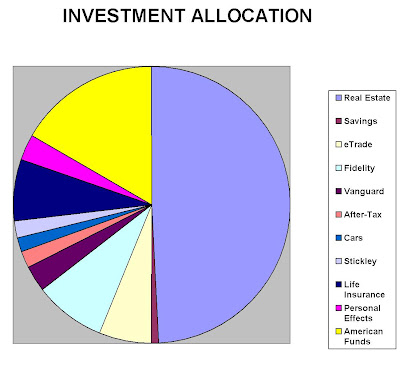 Where is all the money invested?
As I lurch toward retirement, I wonder where my money is invested and whether it is properly invested - you know, the same fears and paranoia that we all have.

I recently constructed the pie chart above, as a personal exercise, which lists all my assets and shows them as a percentage of my overall "estate".  I made it in Microsoft WORD using the insert-object, microsoft chart, option, and then ctrl-printscreen'ed it into PAINT to make a .jpeg out of it.  It took about 10 minutes, only because I do calculate my net worth about four times a year.  You have to do that, if you want to know where your estate is headed!

The largest chunk is (cyrillion) Real Estate, nearly half my portfolio.  This includes my personal residence and one investment property.  Some financial experts claim that including your personal residence in your net worth calculation is cheating.  But if I could sell it and cash it out, it is an asset, isn't it?

While Real Estate has taken a beating recently, it is now chugging along at a good pace, and should remain flat, or perhaps appreciate 2-3% per year for the next decade.  Even if the market collapses, these properties will not drop down to zero in value, as both can be used, if necessary, as rental income properties, and thus have some inherent value.

Our house is on Jekyll Island, which has somewhat depressed prices right now (maybe down 10%).  However, the island is in the midst of a major renovation, with new hotels, retail, and a conference center being built.  The Authority has also extended our leases by 40 years.  So I think in the long run, it will hold its value and perhaps increase over time.  That new X-men movie will no doubt make the place famous.

Our rental condo is next to a metro station in Washington DC and is slated to be demolished and re-developed, once we can find a developer to take on the project. It is revenue-neutral for the time being, but could be a huge capital gain "problem" down the road.

The next biggest chunk (yellow) is in a SEP plan through Northwestern Mutal (American Funds) and is too large for my comfort level.  I don't like have all my eggs in a basket that size, so for the last two years, I have been contributing more to other funds, to try to grow those, instead.

Life Insurance (dark blue) is the next largest chunk, which comprises four policies through Northwestern and State Farm.  I recently converted several of these policies to "paid up" status.  Two whole life policies are still taking premiums, but these are offset by a 3x gain in cash value, so they are "keepers" to be sure.

My E*trade account is next (parchment).  This was an experiment that has been a mixed bag.  While the account has not increased in value dramatically, neither has it decreased, either.  So I can't complain, in this economy.

I have a small Vanguard account (burgundy), part of a 401(k) plan I had for only a short period.  Perhaps I should think about combining this with another fund.  Perhaps not.

Next is after-tax savings, in stocks (orange), which is enough money for me to live on for six months, followed by a savings account (brown) which is about the same.

As for personal effects, our cars (blue), Stickley furniture (grey) and personal effects (purple) are all about the same in value.  This is one areas where our portfolio may be different that others.  For many people, what is parked in their driveway is a major asset.  For us, our furniture is worth more.  Guess which one depreciates and which holds its value?

Again, financial experts pooh-pooh including personal effects in your net worth calculation.  However, in the last year, I have sold off more than $50,000 of personal effects, including antiques, vehicles, furniture, and various other toys.  So the crap you accumulate in life does have a residual value.  The secret is, to accumulate less of it.

So what do I glean from this chart?  Well, for starters, about half my money, at age 50, is in fairly safe investments.  50% at age 50, so that is a good plan.  I may be over-represented in Real Estate, but it is an investment area that has made me a lot of money over the years, and one that I am comfortable with.

The other investments are fairly diversified, but do rely heavily on mutual funds, and thus may end up being cross-invested in the same stocks and perhaps less diversified than one might think.  Also, the fees and loads from these funds are something I have no idea how to begin to calculate.

My after-tax savings, in terms of stock, as well as savings accounts, need to be a bit larger.  If an emergency should occur, I should be able to rely on something other than credit cards (ouch!) to survive.

One goal I have had for the last 25 years is to be financially independent - to have my own money and not be reliant on others.  I didn't want to end up, in retirement, waiting for a parent to die, so I could inherit my wealth.  And yet, I saw this happen to a number of friends and family members on multiple occasions.  Buying yourself is the most expensive purchase you can make.  But it is totally worth it.  Not being beholden to others is a wonderful thing.

My goal for the next 5 years is to increase after-tax investments, as well as increase some of the other mutual fund investments, to make the Ameritrade portion of the chart more in line with the other wedges.

But overall, for a 50-year-old, I'm not doing too badly.  Not getting rich, but not starving, either.  Three-cent stamp, as they say on Fargo.