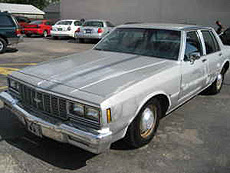 Who would drive such a mess?


A clunker is a car that is near or at the end of its design life.  In many cases, such cars can be purchased for next-to-nothing, as they have high mileage and perhaps one or more "issues" that may need attention down the road.

Unfortunately, sometimes unsophisticated folks buy cars like this, thinking that "a car is a car" and that a wrung-old old clunker can be put right with a little money.  Such is not the case.  And folks like that throw thousands of dollars at an old car and get frustrated and think, "gee, buying a brand-new car is such a better deal!"

It is, of course, a false comparison.  A late model used car, 1-5 years old, can be a good deal, as it has most of its service life ahead of it, is still under warranty in many cases, but can cost as little as half the price of a new car.  A used car like that is a bargain.   A wrung-out old clunker, isn't.

But there are people who intentionally fish further downstream.  And some wily folks will argue that you can buy a clunker for a grand or two, drive it until something major breaks, and then toss it away.  And there is some sort of perverse logic to this argument.

If you are handy with tools and can fix minor things, fishing this far downstream can be cost-effective, with a number of severe caveats:

First, you have to be handy with tools.  Being able to fix small things and put a car in working order can mean the difference between a "good deal" and a "nightmare" in this price range.  There is a reason they call cars like this "handyman's specials."

Second, avoid the temptation to throw money at a car like this.  Once it requires more than $1000 in repairs, it is probably time to call it quits.

Third, have an end game in mind.  While it can be a game to see how many miles you get out of a clunker, there is no point in bankrupting yourself trying to get every last penny out of it.

Fourth, bear in mind that a car like this is not something you want to drive across country.  While you can use a clunker for local commuting, it isn't well suited for long trips - as a breakdown on the road could be expensive and frustrating.

Fifth, if your State has emissions and safety inspection, getting a clunker to pass (unless it is exempt) can be problematic and expensive.  Of course, it is never a good idea to drive an unsafe car.  However, I have seen some inspectors fail older cars just on general principle.  And getting an older car to pass strict emissions standards in a major city is just an exercise in futility, most of the time.

My experience with clunkers goes way back to when I was young and poor.  I bought a 1966 Mustang Convertible from a friend, who towed it out of a swamp, for $100.  I drove it all summer, after installing new floor pans I hammered out of scrap metal and riveted in.  The car was a pile of rust underneath and pretty clapped out.  When the engine finally died, I sold the car for parts for $100 to someone who collected old Mustangs.  Years later, I would find the stripped shell of the car laying in a local junkyard.

I had a similar experience with a 66 Impala fastback I bought for $200.  A nice car, but a typical example of what happens to cars in Syracuse weather - all rusty underneath.  And like most clunkers, it had its share of issues, such as a driver's side window that would not go down.  I drove it for a year and then sold it when it dropped a valve and the rear main seal blew out, sold it for $100 to someone who needed the parts.

Now, you might be tempted to say, "Gee, those are collectible cars!  You should have kept them!"  But back in the day, a mound of rust was a mound of rust, and throwing money at rusty cars is the ultimate in foolhardiness.  Even today, such cars would not be considered restorable.  And by the way, such thinking is a classic example of poverty-think.

In the 1980's, I bought a Mazda GLC hatchback from a friend for $500.  The driver's door wouldn't open and the alternator light was on.  I put a new four-way flasher unit in it (an astounding $30 at the time, the cost of an alternator for an American car!) which solved the alternator light problem.  Some leftover carburetor linkage from the '66 Chevy fixed the door latch.   I drove that all summer and sold it for $1000, as I needed tuition money.  That was probably the only time I actually made money on a used car.

As I noted before, my Brother bought one of those Chrysler New Yorkers from the early 1970's, "as big as a whale" for about $500.  It used up more gas than that within six months.  That would have been a good "clunker" for him, except that he wasn't very handy with tools, so basic repairs, like a wheel bearing, were beyond his abilities.  He spent a lot of money on mechanics and got frustrated.

With the increase in scrap prices in the last few years, as well as the number of "cash for clunkers" programs, the number of clunkers on the road has diminished.  However, it has allowed a lot of clunker drivers to "cash in" on their heaps - often getting more for them in scrap value (or as a cash-for-clunker trade-in) than they paid for them.

Of course, one problem with driving a clunker is that they look like hell, and most people are tied up emotionally in what they drive.  A car to them is like a suit of clothes, and they want to project an image based on what it is they are steering down the road - whether it be the rugged outdoorsy type in a hopped up jeep (driving to the office) or the sophisticated elite in an expensive luxury car.  Driving a clunker projects no image whatsoever, other than as a poor person.

However, such an image can be good camouflage.  Katherine Hepburn related, in her autobiography, how Howard Huges used to drive old clapped-out cars that he had his engineering staff fix up - underneath - so that they drove like new, but looked like hell.  He had one built for Hepburn, who reported that she was able to shop and drive like an ordinary citizen, even being stopped on occasion to be told she "looked like Katherine Hepburn".  Of course, a big movie star would never be caught dead driving such a heap, so no one suspected it was her....

UPDATE:   This article shows how it is possible to lose your shirt on a clunker.   The key to clunker logic is to set a budget and then abandon the car when the money runs out.   Putting thousands of dollars into a clunker is just throwing money away.
Newer Post Older Post Home
View mobile version