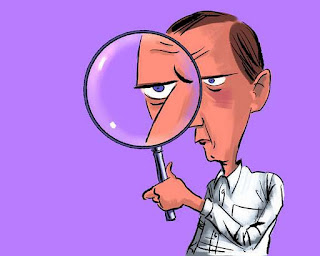 One way to attack an argument, when you have no ground to stand on, is to nitpick.

Oftentimes, in political and even legal arguments, you see a technique employed called nitpicking.  And when you see this happen, you can be sure that the person making the argument hasn't got a leg to stand on, and in fact, is trying to lie to you.

How does it work?  Well, suppose someone says something like, "The average return on investment in the stock market, over the last 30 years, was 10%".

The nitpicker immediately chimes in with, "That's not true at all!  The actual rate of return of 10.36%!  Your argument is flawed and your reasoning is sloppy!"

Now, to a rational human being (the two or three left on the planet at this point) this is an idiotic argument.  It is an argument made by, and made to, someone who doesn't understand numbers or math.  To such folks, numbers are absolute, and anything written out to four decimal places is, no doubt, God's word, and not to be approximated or rounded-off.

And increasingly, more and more Americans fall into this group - people who learned "fundamentals" of arithmetic in school, but have no real handle on what numbers mean or how they work.  You plug in a number in a calculator, they think, and read off the answer to six decimal places, right?

And so, people fall for the nitpicker argument - not seeing the larger picture, but instead, picking apart arguments using imagined flaws.

And it is a popular sport, for example, in discussion groups and with conspiracy theories.  And folks who participate in it, are weak-minded and weak thinkers.

The best way to deal with nit-pickers is to walk away from them.  Trying to engage a nitpicker in a conversation is fruitless.  And let's face it, these are not fun people to deal with, nor are they the life of the party.  They are sad, lonely, and depressed people, who will go to any length to prove they are "right" and everyone else is wrong.  And of course, they never, ever, make a mistake.

Once you try to engage a nitpicker, it is all over.  They will get you to concede that yes, the number was 10.36%, not 10%.  Then, they pounce.  "AHA!" they scream, "Even YOU admit you are were wrong!  That your logic and reasoning was specious!  That everything you say is a deck of cards ready to COLLAPSE!"

And they will never let this go, of course.  Days, weeks, even years later, they will come back to this.  Again and again, they will return to your supposed "error" as "proof" that nothing you have to say is of consequence.

But of course, what would be the point in engaging in a conversation with a nit-picker, anyway?
Newer Post Older Post Home
View mobile version