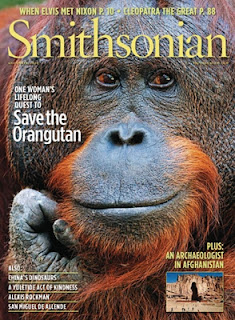 It ain't National Geographic, that's for sure!

Even the physical experience is disappointing.  You open the magazine, and subscription cards fall out of  it.  I mean, how annoying is that?  They flutter down and sail under your couch.  So you have to put the magazine down and move the sofa to retrieve the damn card.  It is like some bad practical joke from a joke shop.  What's next?  Smoke bombs that go off when you turn the pages?

And of course, like most modern magazines, they have changed the formatting and font so that you can't tell the ads from the articles.  And each article is punctuated with ads or six page "special advertising sections" from the Sultan of Brunei.

And as I noted before, most of the ads are for crap.  We are not talking mainstream corporate advertisers here, but come-ons for crappy, overpriced junk like Jitterbug phones, gold coins, and questionable charities like "the Smile Train".

You are the company you keep - which is why I have not monetized this blog.  I don't want my name associated with "the one trick of the tiny belly" or some come-on for car insurance or home refinancing.

The articles are little better.   A few snapshots and some weak text - it is almost like reading someone's travel blog.  Some of the photos appear to have been taken by a cell phone camera.  Perhaps people are writing off their travel costs by becoming "authors" for Smithsonian.  We are told the Taj Mahal is falling down.  The article has a few generalizations about air pollution and some very oddly framed photos, one with horrible back-lighting.  This is a far cry from National Geographic.

In another issue, we are told that tourists are visiting Greenland - apparently including the author.  Some photos and captions and some text that, well, tourists are visiting Greenland.  There are hotels, restaurants, natives, icebergs, and global warming.  The End.  It is about as illuminating as reading someone's Facebook page.  And that might be a clue right there as to why magazines are dying and being "dumbed down".


The magazine has a number of sections which are just single pages with brief snippets.  One is  "this year in history" kind of thing, and another "look what's on our website!".  There is also an "editor's picks" page.  Each one has a series of postage-stamp sized photos with twitter-like captions.  It is the Reader's Digest version of Reader's Digest.  Abstraction abstracted.

But perhaps the faults with Smithsonian Magazine lie not only in the general decline of magazines themselves, but in the institution.  Many folks revere the Smithsonian as this great National Institution, but it has a lot of cracks in its facade - often literally.

The problem is pandering.  The Smithsonian tries too hard to be the Disneyworld of D.C., trying to attract tourists with displays that grab attention, but educate little.  On any given summer day (the worst season to visit D.C., but tourists flock anyway) the sidewalk on the Mall in front of the Air & Space Museum is littered with the remains of vomited "Astronaut Ice Cream" - a freeze-dried concoction sold at the gift shop to families with young children.  In addition to its regurgitation properties, it has one other problem - it is inauthentic.  Freeze-dried ice cream never flew on any spacecraft.  It is just more junk to sell at the Gift shop.

But that is the nature of the beast.   They can't just show you historic aircraft.  No, they have to put up a Star Trek display or something, because that is what the kids want to see.  And not surprisingly, among aircraft collectors and restorers, the Smithsonian is not high on the list.  As a museum, they take these living machines and turn them into artifacts.  Simply stated, there are better aircraft museums and events out there, run by people who actually like aircraft.

Down the street, at the Museum of American History, the Smithsonian really whores itself, putting up what it calls the "Lemelson Center for the Study of Invention and Innovation".  Jerry Lemelson, as you may recall, is a fellow who filed an awful lot of Patents, but somehow never got around to actually making and selling actual things.  Some people accuse him of inventing the "Submarine Patent".  But he managed to collect a lot of royalties from those Patents, and for a paltry few Million, the Smithsonian is willing to roll over and pay homage to this "greatest inventor you never heard of".

Corporate sponsors are used for some exhibits.  An exhibit on the Brain, for example, was sponsored by Pfizer pharmaceuticals, replete with sponsorship signs..  Pretty neat trick, to take credit for something that is funded 70% by U.S. Taxpayer dollars.  Where are the exhibit signs that read "Funded by the U.S. Taxpayer"?

The Smithsonian whores itself for sponsorship money, and sells its tourist eyeballs to the sponsors.  And funny thing, the ladies in fishnet stockings who troll the Mall at night get arrested for that sort of thing.  No one is busting the Smithsonian for prostitution - or pimping.

Of course, the Smithsonian needs that kind of dough, as it has a huge infrastructure to maintain.  And unfortunately, no one wants their name attached to the "Smithsonian leaky roof repair project" but rather to some new and impressive new building.  So more and more stuff gets built, while the existing buildings and collections suffer.  Sort of like the same problem Universities have - too many buildings, too many employees, and no way to pay for it all.  How many new buildings can they put up, while not repairing the older ones?

The latest monstrosity on the Mall is the Museum of the American Indian - part of the Smithsonian's attempt to make sure every minority group has a building on the mall  (Black folks have to make do with a hole in the ground, literally, at least for now).  While the museum is an interesting idea, in execution, it falls a little flat.  Curators scoured Indian reservations, paying highly for "artifacts", which the natives gladly sold them - for a price.  And what did they come back with?  A used snowmobile.  I kid you not - I saw it on display when the museum first opened.  That was considered an Indian Artifact.

Oh well, perhaps they finally are having their revenge for selling Manhattan for $24.  Poetic Justice.

One of the problems the Smithsonian has is its stubborn refusal to charge admission.  Since they don't charge admission to their museums, they have to go, hat-in-hand to the Federal Government every year and beg for money.  And given how many people visit the place every year - spending hundreds, if not thousands of dollars per family in transportation, food, and lodging, why not charge $5 to get in?

P.T. Barnum said it best - the suckers don't appreciate something unless you charge for it.  People equate Free with Worthless.  And if you charged admission, you'd see fewer people just wandering around and using various museums as playgrounds for bored kids.

I get Smithsonian Magazine as a gift every year, and I guess it is not right to look a gift horse in the mouth.  But then again, our tax dollars subsidize this institution, and we should be critical of what sort of bang we are getting for our tax dollar buck.  If we are to pay for the Smithsonian, then its magazine shouldn't be a haven for ads for questionable deals pitched to Seniors.  And if we are going to pay for the Smithsonian, perhaps we need less pandering museums and less selling of naming rights to donors.  After all, the "Gov't" is the one footing the bill here, right?  Or is it the "Gov't Gold"?
Newer Post Older Post Home
View mobile version