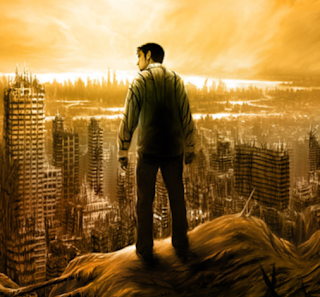 In the last 30 years or so, Science Fiction has morphed from Futuristic to Dystopian.  Why is this, and is it really a realistic glimpse into our Future?


It probably started with the Mad Max movies - Dystopian Science Fiction stories set in the near or far future, where everyone is a criminal, zombies rule the Earth, and major multinational corporations wreak havoc and run entire countries.

Is this bleak prospect really our future?  I think not, and for several reasons.

First, the idea that the "big corporations" will control everything is laughable.  General Motors can barely make cars.  IBM no longer makes computers.  Companies go from all-powerful to bankrupt overnight these days.  The idea that a Corporation will run everything is, on its face, far-fetched.

And it is funny, watching older Science Fiction movies or reading older books, how authors get everything wrong.  Remember in 2001: A Space Odyssey it showed a Pan Am space shuttle?  Pan Am.  How quaint.

And yet, that is an easy story to sell to mindless cubicle-dwellers - the Wall Street Protester type who believes already that the "big corporations" control everything (and then whines when they go bankrupt and everyone gets laid off).

No, I doubt, given the track record of American Corporations, that any of them will be that stable for that long to "take control" of anything.

Second, the idea that crime will run unchecked and out of control in a technological society is also farfetched.  Many of these Dystopian fantasies came about in the 1970's, when crime was in fact running unchecked in places like New York City.  But a funny thing has happened since then - and even during then - crime rates have dropped, and dropped dramatically.

In fact, some anthropologists argue that crime rates, in the long-term, have been dropping world-wide, particularly in Western societies.  We like to think about how dangerous Detroit is, or how gang-infested South Central L.A. might be.  But the "dangers" of modern life pale in comparison to crime rates 50, 100, 200, or 500 years ago.  There was a reason our ancestors used such gruesome punishments back then - they wanted to deter crime, and crime was a very real problem.

For example, we like to make light of pirates - going to movies with pirate themes, dressing up, and even going on rides in Disney World.  But the reality of coastal piracy back in the day was mass-murder, rape, and robbery.  Pirates could - and did - wipe out entire settlements.  They took over ships, murdered crews, raped women, and stole everything.  Some fun, eh?  It makes the Somalians look like sissies in comparison.

The antics of today's terrorists are nothing compared to the ravages of the Visigoths or Attila the Hun.  Yet today, we feel more threatened than ever before - thanks largely to media saturation coverage of even the smallest terrorist event.

In a technological society it is easier, not harder, to detect and punish crime.  In the UK, video cameras are everywhere, monitored by the Police.  And despite privacy concerns, such cameras are becoming quite prevalent here in the USA as well.  We are more aware of crime these days - mostly because we get to see gruesome videos of it on the television.

Fear of crime, of course, is high, and television shows are probably to blame for this.   Most shows on the TeeVee, if they are not of the titillating "Reality" type, are crime dramas.   Someone watching 4-6 hours of TeeVee a night (about the average) might be forgiven if they thought that, at any given moment, they were about to be raped and robbed.

But what about society?  Our infrastructure?  Surely we'll end up living in crowded, noisy, disintegrating cities, where buildings collapse and no one just gives a damn any more, right?  How can all those Science Fiction authors be wrong?

Well, they are.  The trend in the last 20 years has been opposite of that, and for many reasons.  First, land is just too damn valuable to let slums fester for long.  There is little point in letting prime Real Estate in New York, for example, be clogged with crappy run-down buildings.  Second, people are moving away from cities - the population of New York has actually declined in the last decade.  With the Internet and telecommuting, more and more folks can choose to live where they want to, not where they have to.   The folks remaining in cities - or moving back to them - are older, more affluent, and less prone to crime.

This is not to say that all slums will go away - particularly in underdeveloped countries.  But those countries do not represent the future, but rather the past.

Now, perhaps I am wrong - perhaps mankind is destined to end up living like rats.  But it seems that the trend is actually the opposite over the last few decades.  In places like India or China, the standard of living has improved, not declined.  And here in the US, despite what naysayers will tell you, crime is down and many of the worst ghettos have been bulldozed.

But, then again, people like to feel sorry for themselves.  It feels good to feel bad - and it is easy, weak thinking as well.  So folks like to complain that the world is going to hell in a hand-basket, because being optimistic isn't nearly as much fun as wallowing in your own crapulence.

But for me, it is a no sale.  Sorry.  Go sell crazy somewhere else.
Newer Post Older Post Home
View mobile version