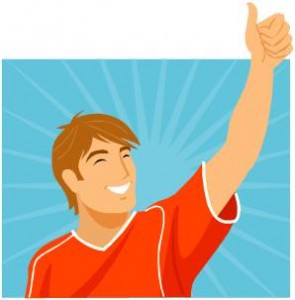 While we are programmed by society to think that being cruel or mean or engaging in sharp practice is the route to success, in reality, providing good value, good service, at a reasonable price, is, in the long run, the key to long-term success.
"Nice guys finish last" - we are told this over and over again.  In order to succeed in America, you have to be a real bastard - screwing your clients, friends, associates, and anyone else, out of their last nickel.  Because if you don't - someone else will!

But, I find this is, more often than not, not the case.  Products and services that are good values tend to sell themselves, and in the long run, succeed.  Yes, the bad boys can make money in the short-term.  But people get tired of crappy service, high prices, and poor quality products.

Two friends of mine recently called, asking how business was.  I am doing OK.  The phone rings or people send me e-mails.  Probably 9 out of 10 of them I try to talk out of getting a Patent.  Why?  Because while it might make money for me, it isn't what is right for them.

Now, turning away business like that is being a "nice guy" - and the sharp practice people would argue that I was foolish not to cultivate clients, convince them that they need my services, and then bill them for every penny I could get.  After all, that would be more profitable, right?

Well, not exactly.  You see, while in the short-term, that might make you some money, in the long-term, if fails.  Particularly in a Patent practice, where the pendency of a Patent Application can take 4 years or more - and involve several Office Actions - you can't afford to have pissed-off customers all the time.  Yea, you can snooker someone into filing, but after three years, they will figure out that you lied to them, and then things can get ugly.

And moreover, it affects your reputation as well.  Most of my business comes through word-of-mouth, and most of this is referrals from those non-clients that I "wasted my time" talking to, for free.  I spend an hour on the phone explaining why someone's idea has already been Patented, and e-mail them some Prior Art, for free.  What does it cost me?  Some time, and talking to someone.  And I like to talk.

But later on, that person refers me to someone else who is Corporate Counsel for  BigCo, and suddenly, I have 10 applications to file.  Did it really "cost me" a lot to give some good advice for free, or was that merely a form of free advertising?

I've seen Patent Attorneys try the opposite tactic - screwing every person who comes in the door.  Yea, they make some money - but they are constantly battling their own clients and constantly trolling for more business - because NO ONE make a laudable comment about them or makes a referral.

And that right there tells you something.  When a retailer or service provider has to rely on heavy, saturation advertising to get people in the door, you should figure that there are likely no real good bargains to be had there.  The car dealer than blares its "GREAT DEALS!" in the newspaper and on Rock 102.7 probably doesn't have great deals.  In fact, you'd be lucky to get a mediocre deal out of them - and you are far more likely to be ripped off.

And of course, this is why referrals are so powerful - and why so many have tried to use the Internet to co-opt word-of-mouth.  If you can set up a fake "review" website and post fake reviews lauding your business, you might be able to convince people that you are offering good deals.

But on the other hand, as I have explained in the past, word-of-mouth is really not a common currency.  WHO is making the review is as important as the review itself.  A laudatory comment from a stranger is worthless.  A critical comment from someone I know to be a clueless idiot and a chronic complainer is similarly worthless.  Personal recommendations have to be, well, personal.

Perhaps I could have made tons of money by selling out and turning my practice into a money machine.  Perhaps.  Perhaps not.  I've seen, firsthand, the folks who have tried to do that, and seen how they crash and burn - eventually.  State Bar investigations, pissed off clients, collapsed practices, bitter acrimony from ex-Partners - it is all out there.  And people who grasp too hard for that brass ring - who want money above all - always end up in that situation, even if it takes years for the Karmic wheel to turn.

So, if you want customers, you want to build a practice, try being a nice guy.  It may not be wildly profitable, but over the long run, you will never run out of customers, and you will never starve.  And, you will worry an awful lot less.
Newer Post Older Post Home
View mobile version