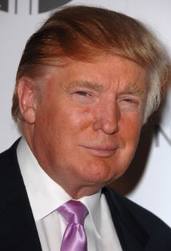 The king of cramdowns!  Tellingly, IMDB lists his occupation as 'Actor'.
For investment properties, it is possible, in Bankruptcy, to strip off liens and cram down lenders.  For average consumers, however, this is generally not the case.

What are cram-downs and what is lien-stripping?  Lately there is a lot of talk of this, and many folks are upset that there is talk of allowing homeowners and folks with student loans walk away from their debts - or at least large portions of them.  And this has a lot of folks - folks who paid back these debts, such as myself - upset.

But first, let's discuss what lien stripping and cram-downs are all about.  Probably the most famous cram-down artist of all time was Donald Trump.  A lot of younger people actually think he is successful businessman, rather than an actor who plays one on television and a manager of a brand name (Trump).

But for those of us old enough to remember the early years of "The Donald" - and the Trump Shuttle, the Trump Casinos, and the Trump Princess - it is a different story.  Trump was once the poster child of conspicuous consumption and the excesses of the 1980s, and many liberals, such as Gary Trudeau, were outraged by his antics.  Trudeau made Trump a regular character in his Doonesbury comic strip back then, although "The Donald" is less prevalent these days.

In the late 1980's, the economy faltered, and Trump, who was far over-extended, faced bankruptcy.  Like most successful businessmen, he made money by using other people's money - banks and investors - to build hotels, buy an airline, or whatever.  And under traditional circumstances, when such arrangements go horribly wrong, well, the banks foreclose or call in their loans, and the borrower goes bankrupt and the banks are stuck with a bunch of collateral they have to sell for pennies on the dollar.

Enter the cram-down.  Since banks realize they are going to lose a lot of money in foreclosure, the borrower has some leverage.  Banks are notoriously bad at managing properties, and often lose 10% of the value of a property for every year they hold it.  So they'd rather be managing money than a hotel or a strip mall.

So the borrower comes to them with a proposition.  Re-write the loan terms - write off huge chunks of the balance of the loan - and let me keep the property.  If you don't, I'll pull the bankruptcy lever and take us all out.  It is akin to a madman holding people hostage with a hand-grenade.  Do as I say, or I will kill us all.  And the banks have to wonder, maybe he's just crazy enough to do it!

And in Bankruptcy, often the borrower can come out ahead.  If a bank holds a second note on an investment property, and the property has declined in value to the point that the note is no longer secured by the property, a bankruptcy court judge can "Strip" the lien from the property, making it an unsecured debt, which is likely to be discharged in bankruptcy.

And in Bankruptcy also, a borrower can "cram down" a primary note by having the balance reduced to the market value of the property and then a payment plan arranged to pay down the note.  In the course notes I recently received for a CLE course, an attorney reports on a client who had an investment condo with a primary note of $75,000 which the court adjusted downward to the now market value of $25,000 - and allowed the borrower to pay off the note over five years at $500 a month, which they could do, as it was rented for $600 a month after taxes and insurance.  The borrower walks away from Bankruptcy court with a paid-for condo (paid for by the tenant's rent) and the bank walks away $50,000 poorer.  Swell deal, eh?

So, a lot of folks are thinking, "Gee, I am in the same situation with my over-mortgaged house, can I do this?" and the answer is no.  Proposals have been floated to allow Bankruptcy court judges to do this, but they keep being voted down on party lines - and you can guess which party votes them down.

And it seems unlikely that it will ever pass, too.  And PMI is one reason why.  As the instructor noted in his course materials, the banks do much better in foreclosure of over-mortgaged personal residences than in cram-downs or workouts.  Why?  PMI.   Most of these thinly financed properties required Private Mortgage Insurance.  If the bank lets the property go to foreclosure, they get the property back, which they can sell at foreclosure, AND they get any balance on the loan paid back by the insurance company.

So, if you approach your lender with a cram-down offer or a workout solution, and you have PMI, don't be surprised if they say "No" - because they will make out better - and in fact get all their money back - by going the foreclosure route.

Some might look at this situation and say, 'Well, I'll just move out and rent the place - that way it is not my primary residence!'  Good luck with that.  Most home mortgages stipulate that it is to be used as a primary residence and that renting it out can be grounds for foreclosure.  Yea, the banks thought of that route, too - probably after someone tried to stiff them.

It is possible, in some instances where the loss in a sale is fairly small, to offer a  'Deed in Lieu of Foreclosure' - selling off the house for what you can get for it and giving all the proceeds to the bank.  This is possible in some situations, where the amount the bank loses is small - and smaller than what they would spend on foreclosure proceedings and in selling the property.  But if you have PMI, and the value has dropped precipitously, well, don't expect them to go along with it.

Similarly, with Student Loans, there is little incentive to let you out of the contract, as these loans are designed to survive bankruptcy and are difficult to adjust downward, except under extraordinary circumstances.

Now, if you are a Wall Street Protester or a Pot-Smoking Hippie (being redundant here) you might scream in outrage.  Millionaires and Billionaires can get loan adjustments for investment properties but the little guy gets bubkis.   And yes, there is a certain unfairness in that (not that being outraged is going to change it one iota).

But consider this.  When I had my investment properties, I had to pay commercial mortgage rates, and these generally were several points higher than residential rates.  Why?  No PMI is available for commercial mortgages.  No government guarantees.  If I go bust, they stand to lose a big chunk of their money.  So instead of the 5.65% I was paying on my house (with no PMI, thank you) I was paying 9.5% in a variable rate note on my commercial properties.

In other words, the banks factored into their loans the idea of cram-downs and lien stripping.  And that is reflected in the interest rates offered.

Some folks argue - and I think they are right - that if you pull away the underpinnings of Home Mortgage financing, rates will go up - a LOT.  Banks won't be offering 4.8% or whatever financing if they know that you could walk away from a huge portion of the balance.   Do you want to see a return to the days of 14% interest rate loans?  Didn't think so.

And the same is true of Student Loans.  If we made these unsecured loans that could be discharged entirely in bankruptcy, what interest rates would banks charge?  Think about it - loaning money to an 18-year-old with no security.  I'd want 20% interest, minimum, if I was even so foolish to make such a loan.

Having the government as lender (which in effect is what we have done, which is part of the problem) is even worse.  If people default, the taxpayer picks up the bill.  And that ain't "fair" either, unless you are no naive as to believe that the government is a Santa Claus who should hand out money to everyone (except those nasty banks, of course).

And as my CLE instructor notes, "It Ain't Gonna Happen."   The odds of the laws being changed to excuse millions of homeowners from their debts is not likely to come about, so long as the people holding those notes have any say - and thanks to the Supreme Court, they have a lot more say these days.  Who do you think is funding these political candidates?

So you can protest all you want, but likely things won't change much.  Sure, politicians will pander to voters.  President Obama is giving a speech right now in Colorado, promising relief for students with loans.  But the relief promised is just something that is already in the law, and all he is doing is advancing the enactment date.  For most people, Student Loans will still be for life.

So what can you do?  And how is your situation different than Donald Trump?  Well, for starters, he knew exactly what he was doing.    On the other hand, most consumer borrowers are just chumps - selling their souls for a shiny car or a granite counter top - or four beer-soaked years at Party U.

You signed those loan docs and you did so willingly.  And now it ain't working out like you thought and you want a do-over.  Nice try but it ain't gonna happen, for most folks.

A better and more realistic approach to life is to Stop being a chump.  Stop watching the TeeVee and looking at 30-50 ads for new cars every night (count them sometime, it's true!).  Stop thinking that borrowing money and owning things is the end all to life.  Think about owning money instead.  You DO have one HUGE choice here, and that is the choice NOT to borrow money.  And no, you don't "need" a new car and no you don't "need" to borrow tens or hundreds of thousands of dollars to get an education.

Stop buying into mindless mantras like "buy as much house as you can afford" and "college graduates make 20% more than non-college graduates".  Start thinking about things, on your own, for a change.  Challenge assumptions - always the key to picking apart any argument.  Nine times out of ten, what people are telling you is based on a false assumption - that housing will always go up, that owning a home is the American Dream, that spending four years smoking pot, drinking beer and getting B's in Psychology will make you the darling of corporate recruiters.

And the list goes on and on.  Do I feel sorry for the kid who racks up $10,000 in credit card debt trying to "mod" his Mother's old Honda into a race car?  No.  He ends up with a worn-out Honda (and all cars wear out, over time, if you use them) and a staggering credit card debt - at high interest.

And yet, people would rather rail about the "unfairness" of it all - as though their own actions had no bearing on the situation.  Their own culpability means nothing.  Because if you compare their outcome to say, Donald Trump, it just ain't fair!

And we all know that this is the United States of Even-Steven, where all outcomes are adjusted to be equal.

Well, not yet, anyway.  And hopefully never.

You can argue about unfairness until you are blue in the face - it just perpetuates your chumpdom.  Because only chumps avoid personal responsibility and externalize their plight.

You have choices and you can take action - or more precisely, chose not to take actions that can damage your personal finances.  Reality is what it is - better off to deal with it, than to pine for a perfect world that will never come about.
Newer Post Older Post Home
View mobile version