The Price of Gas 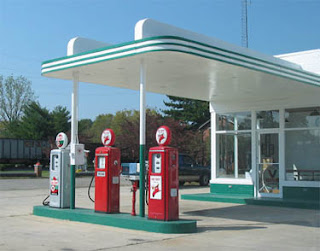 Many folks will drive miles out of their way to save a penny on a gallon of gas.   Does this make sense?


In his book, Die Broke, author Stephen Pollan argues that you should pay cash for everything, as it forces you to think about spending.  And while this might be a good idea to try for a while to "break" you of the habit of spending, in the long-term, a better idea might be to re-think your ideas about spending and your lifestyle.

Pollan makes the comment that if you pay cash, you will be more likely to seek out the gas station with the lowest price for gas.  I am not sure I agree with this.  When you are running low on gas, you tend to find the nearest gas station.  And if the price is "competitive" you buy their gas.  It is only when someone charges an obscene amount over market value that you might consider shunning their business.

An average driver, who drives 15,000 miles a year in a 20-mpg SUV will consume 750 gallons of gas a year.  This means that the savings of going from the highest-priced station in town, to the lowest, saves a whopping $75 a year.

Now, savings are savings, to be sure.  And as I have noted time and time again in this blog, even a $20 savings is worth considering, as each small amount adds up to a lot, over time.  However, in this instance, I am comparing the highest priced gas to the lowest, which is sort of a false comparison. No one intentionally seeks out the priciest station, and using high numbers to show false savings is deceiving no one but yourself.

If you look at the overall picture, most stations seem to be in lock-step, charging about $3.459 or thereabouts (what they charge here on the island), which is only three cents a gallon over the lowest priced station.  This brings the savings down to $22.50 a year.  And if you factor in the fact that the "cheapest" station is 10 miles away and not near anything on my regular errand routes, well, the savings evaporate pretty quickly.

In fact, if you have to drive even a mile out of your way to get cheaper gas, you may be losing money.  At 20 mpg and at $3.45 a gallon, you are spending 17 cents to save money.  If you are only buying five gallons of gas, it is a net wash.  Anything less than that, well, you are paying more to save.  And of course, if you have to drive more than a mile, the scenario worsens.

It is like shopping on the Internet.  You have to figure in the price of shipping in each transaction - as well the the comparative cost of buying at a "brick and mortar" store AND the cost of driving to such a store.  Paying $5 for shipping may seem like a lot, until you realize that the "brick and mortar" store is 15 miles away, and that driving there will use up more than $5 of gas and wear-and-tear on your car.

Yes, it is important to shop around on price - and to get the best bargain you can.  But bear in mind that shopping itself has an opportunity cost.  I try to avoid high-priced gas stations, when I can.  But I don't make a big deal out of it
Newer Post Older Post Home
View mobile version