What Was True Yesterday is Not True Today 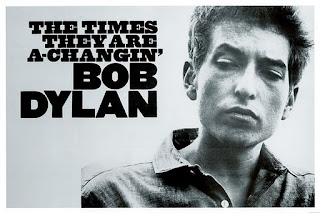 Bob Dylan may have been stating the obvious in his song.  Times are always changing, and what we view as static, is actually dynamic.
We tend to think of societal trends as being cast in stone.  What worked for us a decade ago must still be true today, right?  And the institutions in our lives will always be the same, no matter what, right?

Wrong.  Times change, things change, and it has always been thus.

200 years ago, most people worked in their home, which probably was a farm.  Or they ran a small business.  Very few people were "employees" unless they were particularly unmotivated.

With the advent of the industrial revolution - and the increased mechanization of farming, many young people left the land for the big cities and big factory jobs.  And no doubt, their parents said, "Stay here on the farm!  Don't run off to some big-city tomfoolery!  Stay here!  That is the way things have always been done!"

But of course, staying on the farm was not such a swell idea as machinery made more and more farm jobs obsolete.

And factory work seemed like a pretty good deal, except that as more and more people flocked to the cities, the supply of labor increased, and more factory owners started to exploit the labor.  So folks formed unions - which seemed like a radical idea at first.  Be loyal to the company!  They will take care of you!

But of course, times had changed.

By the 1950's, working for a "big company" was the goal of any young man out of college - and going to college was viewed as a desirable thing to do.  Once you got a job with GM or IBM, you were "set for life" so long as you toed the company line.  By the 1970's, this model started to fray, and by the year 2000, it had largely fallen apart.

And yet, many people of that generation still view "getting a good job" and nursing along a career as the primary goals in life.  And to them, this was as it always was and always should be, even though the era of the "Company man" probably had a heyday of less than 50 years.

By the 1970's the union movement started to unravel.  While once representing over 1/3 of all hourly workers in the USA, Unions today represent less than 6%.  How the mighty have fallen!  Graduating from High School and getting "a good union job" used to be a ticket to long-term success.  Today, such is not the case.

And again, the heyday of the unions lasted, what, 50 years or so?  It was not something permanent or cast in stone.

This is why I often say, "Never take career advice from anyone over 30".   Adults tend to view the world as a static and unchanged place, where everything is Black and White.  We are not good preceptors of change, and what we tend to think is made of concrete is usually only compressed sand - ready to wash away with the next tide.

So when I was 18, adults told me to stop this software foolishness, get a Mechanical Engineering degree and get a good job with a big company like GM.  This was bad advice, even then.

Today, who knows where the jobs of tomorrow will be?  We criticize youth for spending hours in front of the TV or Computer "gaming" as wasting their time.  And yet the next generation of warfare (and who knows what else?) will likely be controlled by drones and other remote devices.

In the book Die Broke, Stephen Pollen makes the argument that modern American Retirement is really one of these short-lived anomalies.  We view retirement as a God-Given right, something that has always existed.  But in reality, it was a byproduct of the Great Depression, had a great run of 70 years or so, but is looking to change dramatically in the near future.

Our predecessors working on the assembly line - or in the white-collar office - had cushy retirements, with fully-funded pensions and full health care.  Unlike their ancestors, who often went to live with their children, the retirees of the 1950's through until today would retire to "retirement communities" often in Florida, where they could live for decades, playing golf and enjoying the sun.

Today, this scenario still exists, but many retirees are working at least part time to supplement their income.  And many are learning to live on less, often out of necessity.  And for many of us, who were sold on the idea of a fully funded retirement at age 65, are feeling perhaps a little gypped.  After all, why does one generation get all the goodies, while the next gets a fuck-you-on-a-stick?