Saving - the Hardest Thing To Do! 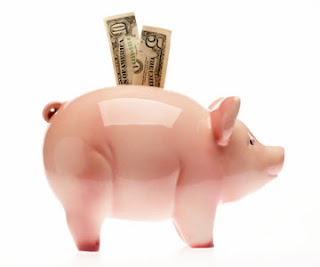 Putting money aside is the hardest thing to do!


Saving money, like dieting, or trying to kick drugs, alcohol, coffee, sex - are all hard things to do, as they are contrary to your brain's need to engage in obsessive-compulsive behavior.  Our brains are programmed to be lazy, and hard work takes extra effort.  And saving money is hard work.

And by "saving money" I don't mean getting a discount with a coupon.  I mean putting money aside into savings.  Usually the alternate definition of "saving money" - by trying to shop aggressively, does just the opposite - it spends money, not saves it.

Most of us under-save and over-borrow.  Why is this?  Well, it is hard to save up money for something.  For example, when I was a lad, I had an old Chevy, and it needed new tires.  As a 20-something, most of my income went to pay for food, housing, clothing, and beer.  Lots of beer.  And as a result, there was nothing "left over" at the end of the day to save.

So I went to Sears and looked at tires, and the helpful man behind the counter showed me how I could get a Sears Credit Card and then buy the tires I needed and pay them off, over time.  And to a young weak mind, it seemed like a good idea.  After all, instead of putting aside $10 or $25 a month for new tires in savings, I was merely paying the same amount, over time and paying a little extra in interest.  It was convenient and easy, and of course, a trap.

Why is this?  Well, to begin with, the obvious thing - interest.  Back then, a new set of Radials for the Bel Aire were like $35 each (multiply that by 10 for current prices on tires for my X5).  By paying for them $10 a month, over time, it would take a year or more to pay off the balance.  And I would end up paying for a fifth tire, so to speak, in the form of interest -which for a store card, for a young kid, in the early 1980's was pretty high (15% or more).

The second problem is that when you are spending "funny money" it is easier to spend more.  So when the nice man at the tire counter tells me that for $2 a month more, I can get raised white letter radials, well, wowee!  Incremental costs, when expressed in terms of monthly payment, seem trivial.  And of course, since the place I went to was offering credit, I did not bother to cross-shop the tires with other stores or look for other bargains out there.

When you pay cash, on the other hand, you not only save money on interest, you shop smarter.  I would have not opted for the higher-end tires for my old clunker, if I was taking cash out of my wallet.  And I might have looked for a better price from a different store - or perhaps even looked for a set of used tires or other options.  But the main point is, since I was putting it all on credit, I was not watching the bottom line.

But for a beer-swilling 21-year-old, saving money is damn hard to do.  And the key reason why is how most people try to save money - as the last thing they do, not the first.  So they spend their paycheck and promise themselves that they will "save" whatever is left over.  Funny thing, though, nothing is every left over.  And as more and more stuff is bought on credit, the odds of anything being left over dwindle quickly.

So, your typical young person tries to counteract this by putting a huge chunk of money into savings.  But he over-saves, and doesn't leave enough to pay the bills.  Pretty soon, the savings are tapped into, and nothing is left in the savings account.  Ouch.

How does a person avoid these traps?  I can suggest a number of things:

1.  Pay yourself first:  You've heard this mantra before.  Put money aside for savings when you get paid, and then leave it there.  There will be nothing "left over" at the end of the week, so put it aside first.

2.  Save modestly:  Trying grandiose schemes for savings will backfire.  Put aside modest amounts at first, so you can train your brain to save.  Even $10 a week is a good start - and over 30 years, that would top $30,000 even at 5% interest.  Start out small and work your way up.


4.  Put money where you can't get at it:  As I noted before, we had a credit union account in Maryland that I mailed checks to.  Since we had no debit card, I would have to drive to Maryland to get at the money.  As a result, we saved.

5.  Create a specific savings plan or account for specific needs:  If your car is getting old, start putting $100 a month into a savings account at your credit union or bank, with the idea of saving up for a new one.  By the time old Betsy heads to the junkyard, you'll have a few grand saved up for the next car - and can pay cash, instead of financing.

6.  Realize that Savings is HARD:  No one has it easy, trying to save money.  It is a continual struggle to save, not an easy road to riches.  So don't expect it to be easy, quick, and painless.  Because it ain't.  But most of the good things in life are the result of hard work and sacrifice.  What comes easy is usually horribly bad for you - just think about it for a second.

We have done pretty well with savings so far - but mostly in retirement accounts.  Saving cash money is always a challenge, as there always appears to be some "need" to spend at the moment, and these needs are usually wants.

The X5 is topping 130,000 miles, which is not a lot for a car these days.  But after a decade, it is showing signs of wear.  I hope to get another five years out of it before I have to buy another car.  But now is the time to start putting aside money for that day.  Putting aside even just $100 to $300 a month for the next five years is a lot better idea than paying $500 a month in car payments for the same time period.  And yet many folks do just that - or worse yet, lease.

So, my goal is to set up a savings account just for that purpose, to set aside money for a specific task for a known expense that is coming.