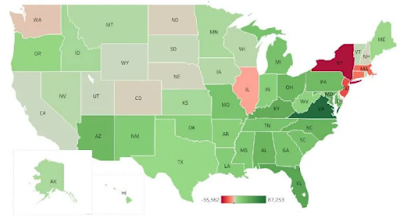 Do some States pay more in taxes than they get back in benefits and do other states receive more in benefits than they pay in in taxes? Does it really make a difference?  The real reasons behind this differential may surprise you, though.

Governor Andrew "I''m not affiliated with the Mafia" Cuomo  says the Federal government should bail out New York State and the Gambino crime family and the Teacher's Union (I repeat myself) because New York has been subsidizing other States for years!   Is this true?  And does it make a difference?

Well, be shocked - Governor Cuomo is lying. I am just shattered that my hero would resort to misdirection and selective use of statistics to try to get a point across.  Who does he think he is, Trump?  Hey, both are New Yorkers, right?

The reality is a little more nuanced.  The biggest "giving" State is Connecticut and the biggest "snout in the trough" State is... Virginia?   Yes, Virginia, there is a Santa Claus and his name is Uncle Sugar.

If you've ever lived in Northern Virginia or "NoVa" you know why this is the case.  The combined areas of Fairfax County, Arlington and Alexandria have a greater population than some States. Fairfax county is one of the wealthiest in the nation.  These three areas have a large enough population to outvote the rest of  Virginia and thus pledge its delegates to the Democratic Nominee.

If you thought Alexandria was some small, slow, Southern town, where the Sheriff sits on a rocking chair on the front porch of the courthouse with a shotgun in his lap, sipping sweet tea and drawling, "Boy, you ain't from 'round here, areya?" you've got another think coming.  This megalopolis stretches from the confines of DC to nearly Richmond, and is home to so many government agencies, army bases, and various government contractors.

Myself included.   Yes, I was a registered defense contractor and did work for the Army Research Labs, as well as Department of Commerce.  So some of my income in government contracts that I received while working in "NoVa" would be counted as "taking" by Governor Cuomo's standards.

But of course, my income was small potatoes.  Ringing the beltway for miles are industrial parks with companies with odd names or acronyms that do mysterious business, often for "the three-letter agencies" - CIA, FBI, NSA, and so on and so forth.  And yes, I worked for one of these contractors as well.  I can't tell you more about it, or I'd have to kill you.  Just kidding.  Or am I?

So Virginia is the number one "taking" State, but only because it is home to so many government contractors, and only because it is so near the District of Columbia.  If some of those contractors were in New York State... the numbers might be different.  Of course, there are government contractors in nearly every State.  Senator Klaghorn promises to "bring jobs" to their district.  Hillary tried to do this with an overpriced Presidential helicopter (which no doubt, she was hoping to ride some day, as the "Hilly-copter" - a name she made up, not kidding).

In places like Syracuse, New York, Companies like Lockheed-Martin or General Electric had offices, so that  a portion of some government largess could be siphoned off and sent to the State, preferably with a ribbon-cutting ceremony with the local pols present.  "We are pleased to announce that WilGroCo has landed a $5 billion government contract to supply ashtrays and liquor decanters for the new Presidential helicopter!"   You know how the game is played.

And New York and Connecticut are not playing the game well, lately.  Many government contractors have moved away from "Blue States" to less expensive and more expansive places where you can fly a Mach-5 hypersonic missile without people looking.   Again, they may throw a token at other States, in order to get a Senator or Congressman to vote for the funding, but the bulk of this stuff happens in places like Virginia, New Mexico, Arizona, and California.

Yes, California is a "taker" State, and likely because it, too, has a lot of skunkworks developing military hardware - one of the largest chunks of our Federal budget.

In terms of military bases, Blue States are losing out, and Red States are gaining.  While New York has West Point and a few other bases (Fort Drum, for winter training) the South and West have far more bases - and this has more to do with geography than anything else.   Real Estate in New York is just too dear to put in an airbase or a missile center.

But there are other things in the budget besides military spending - both government and private sector.  Social Security and Medicare are two biggies as well.  And not surprisingly, people in New York "pay in" to these systems while working and then retire to Florida where they are "paid out".  Does this mean Florida is a selfish pig? Hardly.  Or is Governor Cuomo suggesting that New Yorkers be required by law only to retire in the State they were born in?

And then there are other areas of "contribution" that really don't count in terms of dollars and cents.  New York, for example, gives us Wall Street - and what a treat that is, for the average investor, or those poor schmucks up to their eyeballs in debt with Student Loans.  Nebraska gives New York food - and is also a "giver" State, but you don't see them bitching about it, doya?
(But of course, Wall Street is why New York is a "giver" State, as the financial district alone generates huge amounts of tax revenue for the Federal Government, and, by the way, the State of New York.  When the recession hit, New York was screwed, tax-wise, which is why Cuomo wanted a bail out!).

A lot of these "taker" States end up being the largest sources of recruitment for our armed forces, as well.  Some, such as California and Texas, are high on the list because they are large States.  But in terms of percent, the West and South make up 64% of our military - and yet, you don't hear people bitching about that, doya?

This argument that Governor Cuomo is making is a non-starter, only because it is nonsensical.  Yes, New York "gets back" 94 cents on every dollar they spend on Federal taxes.  (Frankly, I was surprised it was that high).   But if Virginia were the financial center of the planet, and New York the capital of the United States, the roles would be reversed.   The "benefits" of those tax dollars are felt equally by all of us, regardless of where we live.  New York benefits from the protection of our military just as Iowa does.  New Yorkers collect as much on Social Security and Medicare (and likely more, in overall terms as well as per capita) as people from any other State.  The fact they are collecting this money in Florida is really irrelevant.

In other words, this is a specious statistic - a made-up number that means nothing.

The padded government jobs, government waste, corruption, and organized crime rampant in the Empire State, however, is a known quantity. New Yorkers don't mind "subsidizing" defense and retirement spending that they benefit from directly.   But New Yorkers are as fed up as everyone else is, of their five-figure property tax bills, as well as staggering income and sales taxes.

The question is, by bailing out New York, do we enable this drunken, drug-addicted brother who refuses to work? Or should we use "tough love" and maybe New Yorkers will vote corrupt, grandstanding politicians out of office (and slash padded government worker's salaries as they did in Wisconsin?).

You give a bum $5 at the stoplight, he isn't going to use that money to get a haircut for his job interview.  He's going right back to the liquor store for more Ripple.