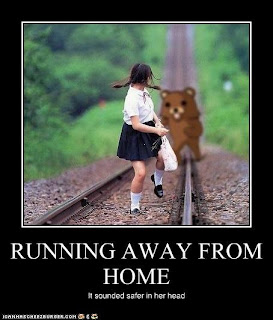 Running away from home isn't some childhood stunt, it usually is a cover for sex trafficking.

I recounted before how a friend on mine's daughter ran away from home at age 14.  I was kind of appalled by how her Mother handled it - immediately repainting her daughter's room and turning it into a "sewing room" and putting her daughter's things in storage.  I asked her why she hadn't gone looking for her daughter, and she said she was "tired of all the drama" and kinda of hoped the daughter wouldn't come back.

I flew out there and rented a car, and her brother led me to the flophouse motel she was living in with some pretty odious older people in their 20's.   While she didn't say outright how she was getting along, I assume it involved some "survival sex" and other things.  They would go to a diner and order coffee and drink an entire bowl of those half-and-half creamers, and then ask for more.  That was breakfast.  I guess if you are desperate, you'll do anything.

I persuaded her to move back home, and she did, and of course that night there was a huge bitching fight between her and her Mom.  Not much changed.   Perhaps they were too much alike.  Anyway, the story has a happy ending - the daughter is doing well and runs a successful business.  The Mother never talked to me again - I think she was embarrassed by the whole thing.

I had tried to tell the daughter what happens to 14-year-old girls living on the street.  It doesn't end well.  Assuming you are not raped and strangled within a week or so, the best you can hope for is to become a snaggle-toothed crack or meth-whore, turning tricks for drug money, getting involved in petty crime, and giving all your money to your "boyfriend" (pimp).

And the rape-and-strangle thing is a "thing" apparently.  Every year, hundreds of young girls go missing and are never seen again, or their battered bodies are found later on - or parts of them wash up on the beach.  For the most part, no one gives a shit, either, as people play blame-the-victim.  After all, you signed up to be a crack whore, right?   Well, that's the attitude many people have.  No sympathy.

I told her all this, and she said, "I can take care of myself!" which is a brave proclamation for a 14-year-old girl that weighed 85 pounds wet.  And I am sure she believed that, too.  I knew otherwise.

In the local paper today, this sad note:

Terrapin Trail: A girl ran away from home, but her father caught up to the silver Honda Civic in which she was riding. He called police and continued following the car. When police caught up to the car, a 21-year-old man went to jail for fraudulent statements or fraudulent documents in government matters.

I am not sure what those charges mean, other than they wanted to hold him on something until they could charge him with more.  The problem is, the "victim" in these crimes often doesn't see themselves as a victim, but the "girlfriend" of the hot dude who befriended them online, and has a bitchin' hopped-up Honda.

I wonder sometimes how my friend's daughter got into that whole mess - whether there was some older man - some 20-something dude who hung out at the local high school, impressing the young girls, who saw his "bad-ass" persona as sexy and exciting - and certainly a diversion from the boring day-to-day living in suburbia.   Such people exist, but not all of them are pimps, of course.

I recounted before how a (former) friend of mine got into cocaine and thought he was a player.  He dumped his girlfriend of many years and started picking up underage girls from rural areas (the "North Country" we called it) who were impressed by this "sophisticated" 20-something dude from "the big city" who could buy them beers and owned his own pickup truck.  It sounds stupid in the abstract, but it is a potent cocktail for a hormonal teenage girl, who sees all the boys in her hometown as dorky losers.

I am not sure where I am going with this, other than I understand why fathers are paranoid about protecting their teenage daughters.  They know all-too-well how men behave - badly.   The Dad in the story above knew the score with this fellow who was "befriending" his daughter.  Hopefully, there is a happy ending.

I guess this sort of situation illustrates how decisions made when you are very young can really screw up your life later on - or shorten it, considerably.   Signing up for student loans pales in comparison to the things you can do to ruin your life at an early age.   A neighbor down the street is recovering from a major head injury.   A group of teens went for a joy-ride with an older boy who had a "bitchin' car".  He drove too fast in a suburban neighborhood and hit the back of a forklift parked by the side of the road.  Five kids packed into an economy car - sounds very familiar to me.

When I was a kid, a friend of mine did the same thing.  She and five other people piled into the back of a Vega station wagon, and the drunk teen driving hit a large oak tree after missing a turn.   It was hours before the police found them on that rural road.   She broke her hip, arm, and a leg, and had internal injuries as well.   The driver died.   It is a story repeated every year, it seems, in every local high school.

Drugs and alcohol are another way to screw up a young life - and often related to the horrific car accident scenario or the runaway teen.   I know about the drug thing, personally.  My sister thought that giving me pot at age 13 would "mellow me out" and that she was "doing me a favor".   Pot smokers think that way - it becomes a religion.  I know I fell for it.   A decade later, I woke up as in a fog and wondered what the fuck happened to my life.   One day, I was a straight-A student in Junior High School and the next I was 25 years old and working menial jobs.  It was like awaking from a coma.

Most, however, never wake up.  I know folks that to this very day, are still the same high-school stoner they were nearly 50 years ago.  They left a trail of failed careers, marriages, estranged children, criminal records, and so on and so forth.   And it all started with that one bong hit in high school.

But of course, there isn't much you can do about it.  Like my friend's daughter, we all though we could "handle it" at the time.  No amount of persuasion or argument would convince us otherwise.  We knew what we were doing! - or so we thought.

It must suck to be a parent.  I can't imagine the heartbreak of watching something like that go down.