You're Not the Only One Living Paycheck-to-Paycheck! 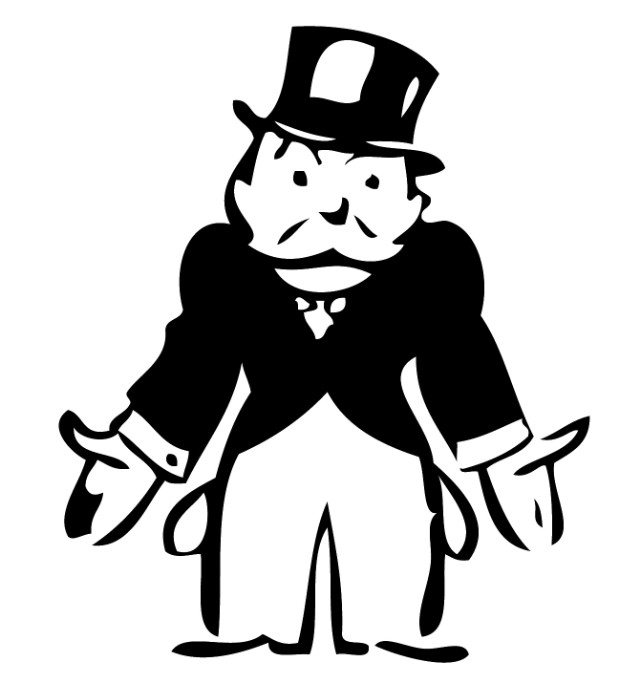 The company you work for, the bank that holds your mortgage, the landlord who collects your rent, the finance company who holds your car loan, the government you voted for - all living paycheck-to-paycheck, just like you!


The union of Losers, Whiners, Ne'er-do-wells, and Complainers regularly trots out the argument that debts should be forgiven, or rent controlled (or even made free!) and that companies should pay workers more, or that the government should just hand everyone free money.  And in each case, the "logic" behind this is the same: "They've got all this money - why not share it with us?  They can afford it!"

And if you are a working slob, you might actually believe this.  I know I did at one time.  I would sit around having a coffee break with my fellow drones, and one of them would say something stupid like, "Well, they can afford to lose money on this project - it's a write-off!" - without understanding what a write-off was, or the fact that you can't deduct your way to wealth.   In another situation, I heard one opine, "They will never close this factory!  They have too much invested!"   But they failed to realize that no matter how much is "invested" in a building, if it is losing money, eventually you have to close it or go bankrupt.  Oh, and factories really aren't all that expensive, in the greater scheme of things - compared to the profits made from the products produced, or the payroll burden of those same "workers".

Oh, and yes, in both cases, the factories eventually closed, despite all those write-offs and "too much invested".   One of those companies went bankrupt.

Why was this?   Well, the reality of business is that most companies - if not all - are very thinly financed.  They are living paycheck-to-paycheck just like you are.  There is no Scrooge McDuck money vault that the executives swim in, after lunch.  The money coming in from selling products or services goes right back out the door to cover expenses, your paycheck, and of course, to pay back investors - who are lucky to get a few percent in dividends, if that - under normal circumstances.

Sounds kind of odd, but that is the way it is, by design.  You see, if you start a company making widgets, and they turn out to be wildly profitable, someone else will start a competing company making widgets and selling them for a penny less than you do.   So you have to lower your price by two pennies - until both of you are scraping at margins and trying to out-do the other guy.  The net result is competition in the marketplace which means lower prices for consumers, which is a good thing for the rest of us.

But it also means, most of these companies have very little headroom, in terms of cash reserves.  Every penny in income is spoken for, in terms of overhead, salaries, dividends, interest payments, and so on and so forth.   And yes, there are a few exceptions, such as monopolies, new technologies, and so forth - but those don't last for long, before competition eventually reduces high-profits to mere margins.

There are other reasons for this as well.   If a company has a lot of cash on hand, it is an attractive target for a takeover - or a lawsuit.   The purpose of a corporation is to return dividends (profits) to investors, while producing (hopefully) some social good.   So leaving money in the till really isn't doing the company's business.  Besides, if you leave the cash on hand, you often end up going out of business, as your competitor used his "extra" cash for R&D on new products, and ends up cleaning your clock in the marketplace.

Banks and Landlords have similar problems.  You may think a bank has "a lot of money" because they have a big vault full of it - but you'd be full of it, too.   The money they have is all on computers, and most of it belongs to someone else - or is lent out.  You don't make money, as a bank, by hoarding it.  You make money by making loans - after taking deposits from customers.  Or at least that is the way it was done in the era of "bank interest".

Sure, they can afford a bad loan or two - that's factored into their business model.  But when everyone defaults?   It can bankrupt a bank, in short order.  And already we are seeing banks shitting their pants at the amount of bad debt they have on the books, particularly overdue credit card debt and car loan debt (a problem before the virus hit, by the way).

Banks really can't make wild profits for the simple reason, again, that if they did, some competing bank would offer a better deal to depositors and borrowers and steal away the first bank's business.  Again, it becomes a race to the bottom and a business of margins.  No one makes wild profits for very long in a free market competition eventually forces these down.

Your landlord has a similar problem, which I can attest to as a landlord.   Sounds like a sweet deal, but even one month's missed rent means you are losing money for the year.   The money you pay in rent goes to pay a mortgage, property taxes, insurance, repairs, and in some instances even utilities. Even though my condo is "paid for" I am not making a lot of money on it, and in many years, lose money.   If a tenant leaves and it takes 2-3 months to find a new one, I make no money that year.  If there are extensive repairs to be made or even a repainting, I make no money that year.    This year, the unit above us broke a pipe and flooded the unit.   The association insurance policy will pay for repairs, but it means no rent for at least 2-3 months (and maybe a lost tenant).  I make no money this year.  And no, I am not getting rich on "write-offs" because I hardly pay taxes as it is, on my income.

The idea of rent control or today, "Rent Strikes" sounds cool when one is 23 and clueless about how businesses work, but the reality is, a  landlord really can't "afford" to take it on the chin and lose more than maybe a month's rent.   And the reasoning is the same as with the bank, or a company.   The landlord is likely mortgaged to the hilt.  They have debts to pay.  And if the landlord is one of these corporate deals, well, they have investors to pay back - who loaned money to the company so they could buy and maintain properties to rent.  And the investors expect to make a few percent in dividends (and that's all you make these days, if you're lucky - a few percent.  No one is getting wildly rich on these deals).

The cost of owing a property isn't that much less than the cost of renting one - again, there are some exceptions, but again, those often fade away more quickly than you think - spikes in rent and housing bubbles usually sort themselves out, unless that is, the government tries to "help" by price-fixing or providing funny money. In a normal market, however, there is again the race-to-the-bottom, with competition for properties and tenants.  If you think your landlord can afford to let you live somewhere rent-free, think again.

Our government works the same way - State or Federal.  The Federal government isn't even living paycheck-to-paycheck at this point, but payday loan to payday loan.   We keep spending more money than we have and borrowing more and more.  States usually have to balance their budgets, but many have made promises to retirees that they might not be able to fulfill down the road (this virus thing could have solved that, too - along with the Social Security crisis, but these namby-pambies had to go all quarantine on us). With the economy in free-fall, States are finding their sales tax revenue plummeting.   Property tax and income tax revenues are sure to follow.

So what's the point of all this?   Only that it isn't just individuals who are going to be affected by this economic downturn.  The companies they work for will be affected as well, which means individuals' 401(k) or pension plan may be affected.   It also means governments will have to cut back, which means layoffs in government, snowballing the whole damn thing.   The idea that was can just hand out money to everyone or forgive debts or suspend rents sound swell (particularly if you are a debtor or a renter) but it will have ripple effects on the economy.

Of course, in most cases, the people not paying their debts or rent don't have a choice in the matter, as they are flat broke or will be.  And I guess that was my point - that is how this whole thing is going to snowball.   There isn't some secret stash of money we can tap into.  GM doesn't have wads of cash laying around that they can afford to not sell a single car for a whole month.   Companies are just as thinly financed as most people are.

Even the government can't afford to pay us all not to work for very long.

And that is a scary thought.


"Maybe the situation of the companies is bad and there is not much spare cash lying around, then how come the business owners and top level guys are able to achieve splendid isolation and wait the corona virus out...where did they get the money from?"

He's talking about a few people at the top. Yes they all awarded themselves bonuses, as I noted.

But this is a common fallacy of the far left. They think they can tax the rich in this will pay everybody a huge amount.  But even if you took away all of Warren Buffett's money it would amount to a one-time payment of about $230 bucks per person in this country.

And by the way, much of the "wealth" of the very rich is illusory.  Sure, Bill Gates is worth X Billion dollars, but most of that "wealth" is in stocks, which if sold at the wrong time, (such as now) would yield half that amount.

The amount of money a CEO makes pales in comparison to how much it takes to keep General Motors running just for a day.

And speaking of General Motors - they went bankrupt back in 2008 simply because sales slowed down.  How do you think this is going to play out when sales stop entirely for nearly a month?

You can take away all the wealth from the "rich guys" and it won't make much of a difference.  Oh, and by the way, good luck with trying to take away people's money - from a legal standpoint, and a political one, as well - not to mention a practical one.
Newer Post Older Post Home