Salute to the Last Responders!

Being a policeman or fireman can be a dangerous job, and we all appreciate the hard work they do.  But there are other public servants who have far less glamorous jobs that are often just as dangerous - if not moreso - and we ignore them.


A reader writes that at 7:00 PM where they live, everyone opens their windows and bangs on pots and pans to honor the sacrifices of medical workers and first responders.   I mentioned this to Mark and his first reaction was, "That has to be in Canada, right?"

And indeed it was.  I am not taking a piss on Canada, only that it just sounds so, well, Canadian.  Americans would never do that.  We would be more along the lines of "where's my jumbo package of toilet paper, dammit!"

But it got me to thinking about this whole beatification of "first responders" that started after 9/11.  A friend of mine was a nurse in Vietnam, and said, "No one every 'thanked me for my service' of any of that bullshit.  I was doing my job!"  And she spend many years working in hospitals after her war service, but no one banged on pots and pans when she got home.

After 9/11 we started this whole "thank you for your service" thing, and indeed thanks are due. Before then, it was just a job - often a low-paying job at that.  Policemen, firefighters, soldiers, nurses - no one got rich from these sort of jobs, although demand was always high.  That was the conundrum of being a nurse back then - and perhaps today.  Demand was always high - you always had a job offer.  But salaries were never all that great.  Misogyny was part of the deal.

That has changed for a lot of public service jobs, at least in part, and at least in parts of the country. We have all read about the firefighters and police unions bankrupting towns in California, after stacking the city council with union lackeys, who voted raises for public service employees.  And in larger cities, some firefighters were making hundreds of thousands of dollars a year, with overtime.

Some folks say, "well, it is a dangerous and tough job!" and indeed it can be.  It also can be hours of sitting around doing nothing, followed by minutes of terror, as one firefighter friend told me.  The first serious auto wreck call you go on is difficult - seeing not only dead people, but their brains scattered all over the place.   Fun stuff.   It is not just the running into burning buildings part.

But I think the public service unions have been behind a lot of this beatification of public service employees.  They have been pushing this "if you can read this, thank a teacher!" nonsense, which fails to address the problems with increasing illiteracy in high school graduates, oddly enough in the school systems with the highest paid teachers.  Maybe not so oddly enough.  They want us to believe that teachers are making horrific sacrifices for the sake of the community, for very little money. In some areas, though, teachers make well over a hundred grand a year - and have cushy pensions and health plans.   I don't think their sacrifices approach that of firefighters, police, soldiers ...

Yes, garbagemen, or sanitation workers, or "sanitation engineers" as some call them.  I guess being an engineer is no longer a big deal anymore.  My Dad, who called himself a "sales engineer" had  a management degree from MIT (thermodynamics was too hard, he said).  I told him, "Dad, there's only one Engineer in this room, and you ain't it!"  What a Kevin!  Today, we have "social media marketing engineers" whose "engineering" is basically promoting products and services on the Internet.   It won't be long before they are calling themselves, "Doctors" as my hippie brother does, although he is only licensed to perform surgery on puppets at the present time.

Being a police officer is a dangerous job, but not for the reasons you think.  Yes, there is a risk of being shot by a felon during a traffic stop. But many officers serve an entire career without unholstering their weapon.   On the other hand, being hit by a car while performing a traffic stop is a real risk.   A 70 mph river of metal is rushing by, inches away, while you ask some hapless loser for his license and registration.

Traffic stops are dangerous, but not just for the reasons you think.

I worry about these cops, because I often see them make really unsafe traffic stops - not pulling fully off the road, and often standing in the road, assuming their flashing lights will slow down traffic. The whole traffic stop thing is a dangerous scenario from the get-go.  But the biggest risk of the job is being hit by a car.

The same is true of sanitation workers.  Not only are they by the side of the road (or in the road) on busy streets, they hang off the side of a truck as it goes down the road.   Lose your grip and you head-plant on the pavement.  They don't even have helmets to wear.

And the shit they have to deal with - often literally.  Bags of soiled baby diapers that have been seasoning in a garbage can in the sun for a week.   Dead pets, bags of vomit - they've seen it all.  And that smell - you can't really get rid of it, no matter how hard you try.

But getting hit by cars is the real problem, and according to some sources, more garbagemen die on the job than patrol officers. 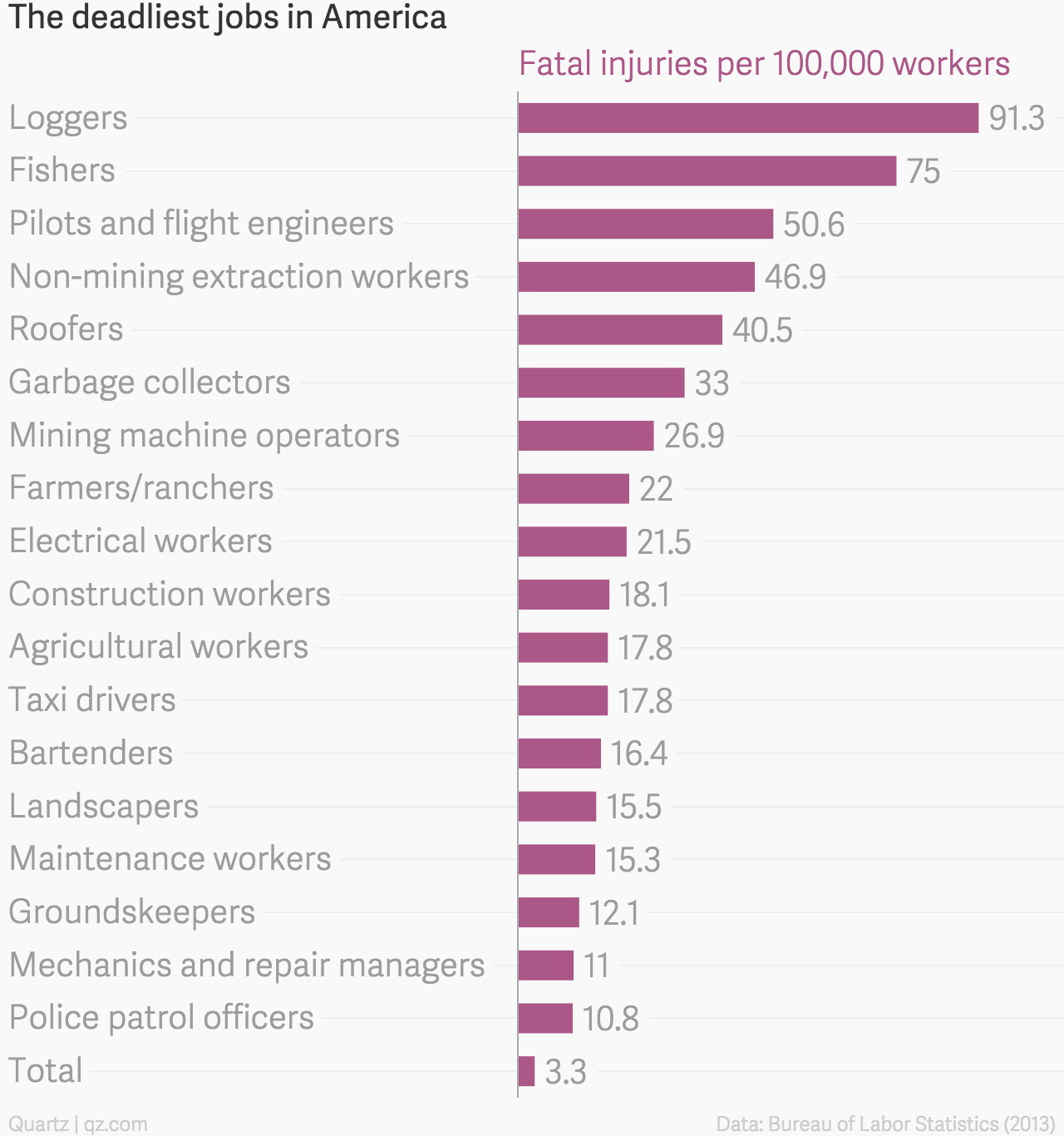 This chart is a little sobering.

The reasons for this are fairly simple.  A garbage truck doesn't have flashing lights, or if it does, just some lame yellow beacon like I have on my golf cart.   The workers work behind the truck, and if someone slams into the back of the truck - well, they become a sandwich.   And of course, there are powerful crushing and compacting machines you can always fall into.  And falling off the back of the truck is always a present danger.  Imagine being a cop and having to ride on the back bumper of your Crown Victoria.   Kinda scary.

There are lots of dangerous jobs out  there and a lot of people make sacrifices every day to make our lives easier.  And no, "advertising executive" probably isn't one of those jobs, although it likely pays a lot more money.  That is an interesting conundrum - the jobs you think would be "easy" and safe often pay the most, while dangerous and often unpleasant jobs often pay the least.

And maybe sanitation worker isn't the most important job in the scheme of things.  Or maybe not.  As each garbage strike illustrates, things go to hell quite quickly when trash doesn't get picked up.  One reason organized crime is in the trash business is they know all-too-well that you can't run a business without trash removal service, and if you can put a lock on that, it is just as effective as controlling the businesses that are the source of all this garbage in the first place.

So, here's to you, sanitation worker!  We salute you!  We appreciate all your hard work, and I'm really sorry about the time I filled the roll-around with broken sheetrock and bricks.  Hope your back is feeling better soon!

Keep up the good work during this pandemic.   I am sure there is a lot of nasty shit in those garbage cans these days.  Wear you mask and gloves! 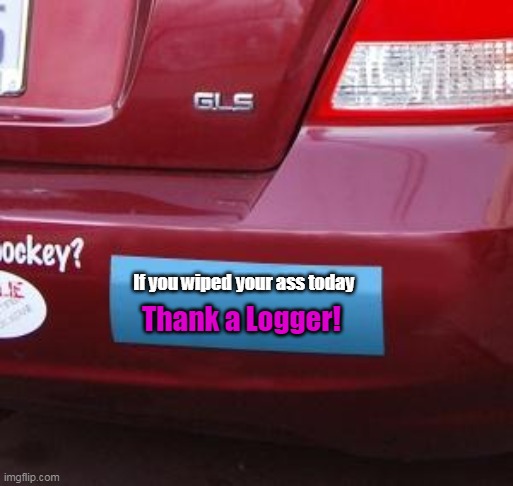 And the next time you see a logger, thank them as well.   After all, without their sacrifice, there would be no toilet paper.  It's the most dangerous job in the United States!  No fooling!
Newer Post Older Post Home