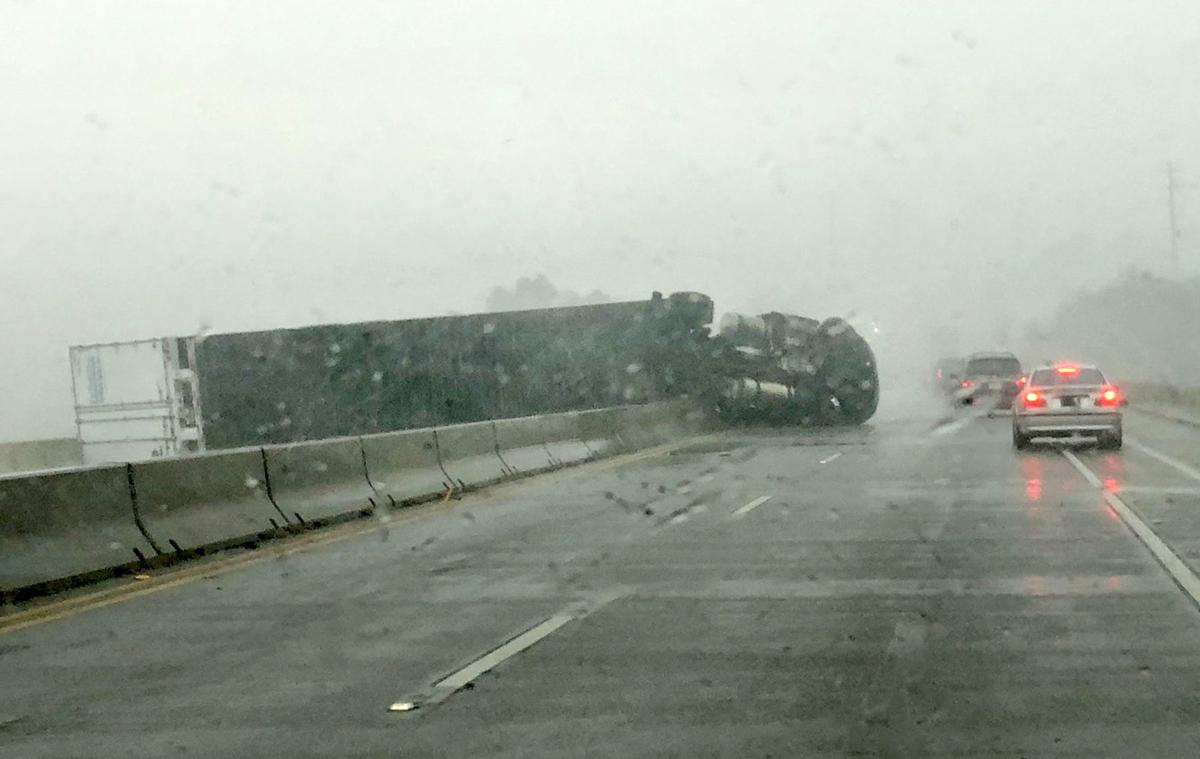 In terms of data, there are haves and have-nots.


On the way home from the market yesterday, the phone buzzes - a NOAA text message warning of a tornado.  Then the phone rings - a recording from NOAA with the same warning, in a synthesized voice.  We get two messages and two phone calls, each.   We hurry home in time for a downpour of a storm, preceded by a lot of wind, but no tornado, fortunately for us.  Oh, and while we're at home, we turn on our NOAA weather radio and follow the storm warnings - which automatically set off the radio every time there is a new one.

The National Oceanographic and Atmospheric Administration (NOAA) has its shit together.  Like I said before, their hurricane storm tracking site is the best.  I go to the CDC hoping for similar enlightenment on the virus, and all I get is confusion. Not every government agency is run as efficiently as the others.

The system works well - although it is a little scary when a robotic voice tells you that you are in a "life-threatening situation" which was the case for folks North of us.

It is not just NOAA, of course.  The emergency notification system is used by the State Police for "Amber Alerts" and "Silver Alerts" for missing children and seniors.

Of course, this whole system assumes we have a cell phone, and a cell phone with a texting plan, which until fairly recently, I did not have.   Texting is odd.  After all, if you think about the progress of electronic communication, it seems regressive:

Samuel Morse:  "I've invented the telegraph!  We can send text messages over wires!"

Guglielmo Marconi:  I've have gone even further - now you can talk over the air!

Samuel Morse:  "Really? Great! Might as well throw away all this telegraph equipment.   No one will go back to text messages if you can communicate by voice!"

How wrong he was.  My parents took me to the 1964 World's Fair in Flushing Meadows, New York, and we saw the new Ford Mustang, rode in the back of an engine-less '65 Impala through General Motors'  "Motorama" and saw the demonstration of the new Bell Picturephone   In a few short years, we were told, we would all talk to each other and see the other person via flickering black-and-white video.

It never happened.  While the technology was there - and got cheaper and cheaper over time - it just never took off.  People didn't want to see each other when talking to them.  When online versions of "picturephone" became available, the same thing happened.   We all wanted to Skype each other, but then it sort of fizzled out.   Video conferencing was sort of a thing, for business, but even then, people sort of lost interest.   Today, with the pandemic, it is Zoom, with its creepy echo-y "hollar down the well" voices and stop-jerk delayed video.  A lot of people find it tiring - quite literally.

It seems people want simpler forms of communication - which is why texting has become so popular.  You don't have to answer a text right away (although some immature people get bent out of shape if you don't) and you only need say what you want - as much or at little at necessary.   It doesn't require any energy - or as much as you want to give to it. Some people text obsessively - usually dumber and poorer people.

I am still not a big fan of texting.  I do it once in a great while, and I get notices from the bank once a day with my balance.  But on the whole, obsessive texting is just not my thing.

Other people make different choices.   We see it all the time - people texting while driving.    It is insane.

Not only is texting a thing, but text-based social networking is, too.  Facebook is mostly text-driven, as is Twitter.   It is just assumed that you are on all of these platforms - that you receive texts, tweets, and Facebook posts.   No one assumes anymore that you have a landline, answer voice calls, or even respond to e-mails.  The world has moved on, electronically.

This was driven home recently by a mass-shooting incident in Canada, where they don't have mass-shooting incidents.  Well, not generally, but they do occur.  Canadians do own guns - mostly long rifles for hunting and whatnot.  They just don't make a fetish about it as we do in the US.   But all it takes is one insane individual with a gun to muck things up.  I am sure the NRA is already trying to make hay out of this, too - "If only those other people had guns, they could have defended themselves!"

But some of the victims probably had rifles in the home.   When an RCMP officer comes to the door armed, however, you don't gun him down - and thus the perpetrator was able to surprise a lot of folks and keep this shooting spree going for hours.

That, and the fact the RCMP decided to use only Twitter rather than text messages, phone calls, and other extant warning systems, to warn the citizens.  As you might imagine, not everyone got the message.  One fellow lost his wife to this murderer, and as he put it, he wouldn't have let her leave the house if he knew the 13-hour-long shooting spree was still going on. But since he wasn't on Twitter, she died.

I am not taking a piss on the RCMP - they seem to do a good enough job of that, themselves, with various scandals over the years - including this most recent one.  Someone needs to lose their job over this - the ninny who said, "Oh, why bother using the million-dollar alert system!  I'll just post it on Twitter!  After all, everyone is on Twitter and Facebook, right?"

What got me thinking about this was a friend who no longer lives here texted us saying "it looked pretty bad" here on the island with "all the trees down" - which left us scratching our heads.  She is still on in "Island Residents Public Facebook" group, which is an interesting misnomer, as it is a private group limited to "residents only" but has over 1300 members - a neat trick for an island of 600 homes.   A lot of vacationers and former residents (such as my friend) are apparently honorary "residents".

But like everything else on Facebook, it was misleading and overblown.  Things are fine here - the tornado didn't strike, and trees are not "down all over the place".   A truck (shown above) tipped over on the causeway of a neighboring island, but ironically hours before the storm struck.   Yes, it is likely that some dead tree somewhere dropped a branch or tipped over - if you don't cut these fuckers down, they will fall on you even in a light wind and kill you.  But the authority is hesitant to issue permits and it can cost thousands of dollars per tree to have them taken down.   We've spent close to $5000 so far and still have end-of-life pines, full of carpenter ants and pine beetles, that are three to four feet in diameter, at the base, and over 100 feet high, ready to drop.   But I digress.

What is interesting to me, is that information is being parsed based on where you get it from.  And unless you are willing to be advertised to and have your personal information sold to the highest bidder, you don't have access to much of this information.  With social media, there is the additional burden of always having to check your Facebook page or your Twitter account for "tweets" or set your notifications to buzz you every time there is an update - which is why a lot of drivers are distracted these days.  In order to get this information stream, you have to consent to information overload.

In a way, it is akin to television.  Television promises to give you up-to-the-minute news and entertainment, but in exchange, you have to watch endless hours of adverts, programming your brain to think that Coca-Cola tastes good, McDonald's food is yummy and a good value, and that leasing a brand-new car every three years is a sound financial proposition.

As I have noted before, just turning off the television is a better idea.  The "news" is repetitive and misleading, and the "entertainment" is banal and idiotic.   Have you ever tried to watch any of the old television shows of yesteryear on YouTube?   Painful to watch.   You wonder what you ever saw in them at the time.   I am sure that goes double for modern fare - how well will "Reality TeeVee" play in re-runs, particularly once you know who was voted off the island in season 20 of Kung-fu Warbling Chefs Dancing Contest Motorcycle House-Flipper Makeover.

The same is true of Facebook.   I find Facebook people not only are not more informed, but often less so.   My friend in New York is convinced a Tornado has wiped every home off the island after seeing a few pictures.   But such is not the case.

Similarly, people who "keep up on the latest" on Facebook often tend to believe odd things, such as that the world is flat, or that vaccines cause Autism.  Often, Facebook people go off on tangents - damning and shaming people in public virtual lynchings.  Long before this virus, people's lives and careers were destroyed by a few self-righteous people online - the mob is angry.   And then, of course, are the young people shamed into suicide by online bullies.   What the fuck is not to like about Social Networking?

All you ever hear about Twitter or Facebook is how someone's life was altered for the worse - careers ended, marriages ruined, lives destroyed.   As the example in Canada illustrates, these platforms are not a place for serious business.   Posting a tornado warning on Twitter or Facebook isn't an astute move - it will get lost in the sea of dreck that overwhelms those platforms, and not everyone will get the warning.


Sighting of the Day:  In an article entitled "Hunger Spreads Across America and Food Banks Run Out of Food!" the accompanying photo shows a group of people who are not only fat, not only obese, but morbidly obese.   Only in America!    Those starving African kids don't know how lucky they are.
Newer Post Older Post Home