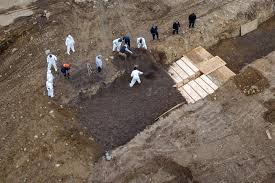 Urban Legends are usually spread through Facebook or e-mail.  Today, they are spread by the "mainstream media"!


There are a lot of stories being reported online that are, when examined more closely, a lot of hooey.  It is not that the stories are entirely untrue, only that when you actually read the whole story do you realize that the headline was a bit of an overstatement, if not an outright lie.  What sort of stories am I talking about?  Well, here are a few:

1.  Corona Virus is the leading cause of death in the USA!   Not entirely true, but then again, it depends on what your time period is - a day, a month, a year, a decade, a century, or all-time.  On a yearly basis, the Corona Virus isn't even a contender.  About 2.8 MILLION people die in the USA ever year, so even if Trump's scary number of 250,000 dead comes true, it represents only a 10% increase in the overall death rate - which may be offset by other factors, as I noted before.

Is this headline true?  Well, technically, if you are counting only deaths for that day.  In recent days, the daily death rate is crowned by the Corona Virus.  But on a monthly or yearly basis, it pales in comparison to cancer, obesity, car accidents, and so on.

2.  New York is (considering) burying bodies in mass graves in Central Park!  Turns out this is not only not true, but laughably so.  Even the New York Times got caught up in this nonsense, which was based on a tweet of all things.  In the event of a mass casualty situation, it is possible such a thing might happen, but even 15,000 dead doesn't count as a mass casualty in a city as big as New York.

Some New York councilman tweeted about these potential disaster plans, and the news media ran with it - after all, it was a juicy click-bait headline!  And the New York Times is basically a whore at this point.  So why not?

3.  Trenches are being dug in potter's fields to handle all the bodies!    This happens on a regular basis, particularly in big cities.  When you read the whole article, (which is in a tabloid) you realize that in New York City, in any given day, about two dozen unclaimed bodies are buried in "potters fields" on Hart island. Since the Corona Virus struck, this number has risen from 24 per day to.... 25.  The actual "news story" is that instead of prisoners burying the dead, the city has hired a contractor instead.  Not much of a story, is it?

4.  Hundreds of bodies are being "dumped in the streets" in Ecuador!  This is an interesting story, as in the story itself it said that (at the time) there were only 100 or so Corona Virus deaths in that country (no doubt there are more now), while the headline blared about 400 bodies "dumped in the streets".   Not so much "dumping" but in the accompanying photos, a sheet placed over someone who keeled over and died in the street of unknown causes.

Another photo showed two coffins in the street, but the same story in another media outlet showed these coffins being loaded into a flatbed truck.  No so much "dumping bodies in the street" as placing them there and waiting for the truck to come along to pick them up.

An ancillary story is that prisoners are being dragooned into making coffins for the dead, due to "shortages".   Ecuador is not a large country, but the same article mentions that only 272 people have died from the virus so far there.   This is enough to create a coffin shortage?   In a nation of over 16 million people?    272 dead - something doesn't add up here.  With an annual death rate of 5 per 1,000 people, they normally see 80,000 dead in a year.  I am certain than 272 more isn't overwhelming the system.

Death is insulated from most American citizens, but in other countries, less so.  We came upon a gruesome motorcycle accident in Mexico once, and people all milled around to look at the dead body of the unfortunate victim.  In America, the Police and medics would arrive and quickly cordon off the area, put a sheet over the victim, and quickly move the body away.  Not so in other countries.  It was appalling (to us) to see people gawking at the corpse on the ground, but in their culture, it wasn't seen as gruesome or ghoulish.

So it is easy to show pictures of how death is handled in other countries and say "bodies dumped in the streets" even if it is a bit of an exaggeration.  Or a total lie.

5.  Beaches are unsafe and spread the virus!  The reality is, standing to close to anyone can spread the virus, if they cough or sneeze on you.  On a crowded beach, a crowded mall, a crowded amusement park, this could happen.  There is no magic about sand or sun or surf that spreads the virus, but for some reason, people have gotten into their heads that "beaches are dangerous".  As a result, surfers are being arrested for surfing, even though they are hundreds of yards away from anyone.  Beaches are closed, even if no one is on them or people are maintaining "social distancing".

Turns out, beaches are no less unsafe than parks, streets, sidewalks, or any other public place, provided you practice safe social distancing.  Want someplace that is unsafe?  The confines of your local supermarket, which is still open (and thankfully so) otherwise we'd all starve.

Beaches are not "unsafe" unless you are unsafe on them.   Let's stop the hysteria, here.

Local pols here are decrying our governor for re-opening the beaches.   Many Democrats are trying to make hay about this, sending out e-mails to people saying the governor is being irresponsible by re-opening the beaches.   I live at the beach, and no one here is being unsafe.   But hey, if they want my money and my vote, they just lost it.  Like a Democrat will win in Georgia anyway.

This disturbs me on another level, as it appears that Democrats are enjoying this a little too much, and relishing the power to close this, or regulate that or shut down something else.  In Bernie Sanders' Republik of Vermont, they have outlawed the sale of "nonessential items" like toys and clothing and whatever - forcing retailers to remove items from shelves or rope these areas off.  They have outlawed car sales as well, even though car dealers are adapting (in other States, such as ours) to the new reality and selling cars online at pre-negotiated prices.

Sad thing - I don't need a new car right now!  They are offering great deals.  But then again, they were offering "employee pricing" back in December, because the car business was already crashing before this nightmare took place.


Again, what the press is relying on is that people have no conception as to how many people die in a given day.  In a nation of 330 million, it is a lot - about 1% of the population per year.   We insulate ourselves from death in this country, so 100 or 1,000 or even 10,000 dead sounds like a lot, when each year, four times that latter amount die just in car accidents.

We have a lovely suspension bridge near our home.  On each side of the bridge are four signs asking people to call suicide prevention hotlines.  Why is this?  Because an awful lot of people jump off this bridge - not just Bille Joe McCallister.  The press doesn't report most of these suicides, as the local authorities ask them not to.

The theory is, if you make a big deal about it, there are copycat suicides in the subsequent days.  I wonder if the opposite isn't true - that if the folly of suicide was exposed (instead of sensationalized, as the press loves to do) it would tamp this down.  Show how stupid it is to kill yourself over lost money, lost love, or just plain depression.

But it is interesting how the press cooperates with the government in this - so much for a "free press" - eh?   If people knew how many folks jumped off that bridge, it would freak them out.   Just as if people really thought about how many die in car accidents, maybe they wouldn't drive like such jerks.

But then again, humanity.    We are all assholes, apparently by design.

But the media?  OK, the New York Post, or the Guardian or the LA Times and other tabloid publications, I understand.   But the New York Times?  The Washington Post?

When did the main street newspapers become the new National Enquirer?   Probably about the same time they started citing the Enquirer as a source.

UPDATE:  I think these urban legends or at least the exaggeration of circumstances is what brought us to where we are today - mask deniers and protesters and even virus deniers.  When the media exaggerated the initial stages of this virus, and people didn't see the effects in their daily lives, it was easy to believe it was all a hoax....
Newer Post Older Post Home