Sanders Supporters Asking Themselves "What If?" 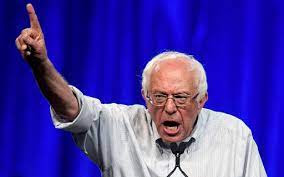 Sanders might have won, if only he wasn't Sanders.

Burlington Vermont - Disappointed Sanders supporters gathered here after their candidate announced he was suspending his campaign.  They are asking themselves what went wrong.  They are wondering whether Sanders could have won the nomination "if only" things had been done differently.   And the conclusion by most seems to be that Sanders would have won, if only the candidate wasn't Sanders.

"We wanted an outsider," one supporter said, "But then we realized Bernie has been in government for decades - and accomplished nothing of consequence. Talk about an inside-the-beltway mentality!"

Another supporter chimed in, "This was a generational thing. Young people across the county flocked to Bernie's message of taking away their parents' money and giving it to them.   But then we realized, he's actually older than our parents!  How can a near-octogenarian appeal to young voters?  What were we thinking?"

Yet others questioned Bernie's math.   "A lot of his proposals didn't seem to add up," one young man opined, "I mean, free college and student loan forgiveness and free healthcare sounds fine and all, but how do you pay for it all?   Then I realized that Bernie can't even balance his own checkbook and is hopelessly in debt and his wife bankrupted a college, and well, I started thinking maybe he wasn't the guy to balance the budget!"

Race and gender also played an issue, in addition to age.   One Sanders supporter mused, "Well, we were running down Joe Biden for being an old white guy, and, well, Bernie is just as old and white as smilin' Joe.   You start to wonder whether things really would have changed."

Then there is the issue of his anger.  "The anger thing, yes." another Sanders supporter noted, "At first, it was refreshing that he was so fired up about things.  But after a while, he just started to sound like one of those pot-smoking losers who just gets angry all the time, but never accomplishes anything.   Maybe that is an apt analogy, come to think of it!"

There is also the issue of party affiliation - or lack thereof.  "I suppose it would have helped if Bernie was a Democrat," another supporter chimed in, "After all, he was running for the nomination of that party!"

But all hope is not lost to the loyal Sandernistas.  Bernie has only "suspended" his campaign, in what many are seeing as a cold, calculated, strategic move.  "With this COVID thing going around," a young Bernie fan noted, "Biden could catch it... and, well....not that I'm hoping he dies from it or anything!"