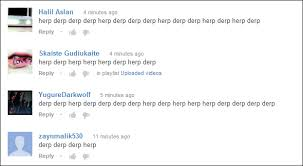 Curating a Comments Section is a full-time job.  No Thanks!


A reader asks why I do not have a comments section but respond (sometimes) to e-mails.   There are multiple reasons.

Comments sections in any website, review site, blog, photo hosting site,  etc. seem to take on a life of their own.  By now you all know how noxious and odious the YouTube Comments section can get.  You post a video of cute kittens and within three comment posts, it has devolved into a flame war between two commenters about Obama versus Trump.  It ain't worth it.

And in the past, when I allowed comments, just such a thing occurred, and it was unpleasant.   Having to step in to the middle of petty disputes between strangers just isn't my bag.

You can set comments so that they are "awaiting approval" and then read them and decide whether to approve them or not.   People generally don't like this approach (I certainly don't if I am commenting) and it again places a burden on me to "curate" comments daily, and if I do not allow a certain comment, then I am accused of censorship.

Many sites use this latter technique, and the comments section ends up being, by design or accident, mostly positive comments about how the blogger in question is a freaking genius.    I am not sure that sort of comments section does anything but fuel narcissism.

A comments section can drive traffic as it makes a site more interactive.  And as odious as flame wars and trolls are, they do create traffic sometimes, as people keep going back to the well for more abuse.   Personally, I find myself "commenting" on other sites less and less, and end up deleting comments over time.   They really seem to serve no purpose.

So no comments section - it takes up too much time to curate and referee, and to censor it makes it basically worthless.  To leave it unmoderated means it becomes toxic.

And with regard to the last, not only do you get trolls and flames, but also SPAM - and curating the SPAM takes time and leaving it in makes for a crappy comments section.   Catch-22.

Some readers have bothered to e-mail me, which I neither encourage or discourage.  I do not have time to answer all e-mails, however, so if I do not respond, please do not take it personally.  I do get some good ideas from some reader input now and then.   And encouraging comments, corrections, or discussion is appreciated.   But yes, I do get flames, trolls, and SPAM as well - a lot easier to filter with e-mail than in a discussion group, though.

I also started this blog for my own designs, to get inside my own head and try to analyze how I got to be where I was and am.   If you find this useful, amusing, or whatever, that's great.   I am just bloviating most of the time, however, not offering expert opinion or advice.  So quite frankly, I am amazed that anyone at all reads what I have to say.

So that is why I have "no comments".   My apologies that Google puts a comments box at the bottom of the page - some readers have entered extensive comments only to get a message afterwords saying that comments are not enabled.   I have no control over Google, sadly.
Newer Post Older Post Home