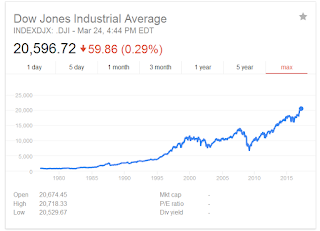 When the market goes up, eventually there is a correction.   But over time, it goes up.  Timing the market is nearly impossible to do.  Click to enlarge.

Are we about to see the Trump Bubble collapse so early in his administration?   Like so many other things in his administration, the high-hopes of the market are turning into cold hard reality as profit reports from banks and car companies come in far below expectations.  And now with the abject failure of TrumpCare, the health insurance companies, whose stocks were climbing, are now bringing down the market.

The market was exuberant when Trump was elected.  We would be building roads and bridges and walls and prisons - a good time to invest in bulldozers and concrete!   The EPA would be muzzled and CAFE and emissions requirements would be slashed.   Eight-liter monster pickup trucks would be the new norm!  And gas would be cheaper than ever, as oil prices fall with new pipelines in place and peace in the Middle East!

But then reality kicks in.   Oil prices are up, so monster trucks are out.  California Air Resources Board may still be around even if the EPA is stifled - and many States have followed CARB with their own emissions requirements.   And a recession in the auto business may be coming, as everyone went on a car-buying binge in the last seven years and with seven-year auto loans, well, not many are in a position to buy a new one just yet.

What happened in December was a classic example of the market getting ahead of itself.   People were buying stocks in companies they thought would prosper in the future.   But now things are starting to look different.  The health care sector was improving, with my Blue Cross stock nearly worth what I paid for it.   In retrospect, I should have sold - but who could have predicted that TrumpCare would fail in an all-Republican Congress?

Well, I guess I should have seen it coming.  Obama had the same problem with a Democratic Congress.   Extremists on both sides of the party refused to go along with his plans in many cases.  It was amazing that Obamacare was passed at all.   And of course, many Congressmen will only pass a bill if there is some sort of kick-back in it for him - a new bridge in his district with his name on in, in big, big letters.

The infrastructure program looks likely to fail as well, as hard-line Republicans put balancing the budget ahead of spending on roads.   It only appears that defense spending is the one area that everyone (even Obama) agrees that more should be spent.   McCain wants to spend even more than Trump!

And tax reform?   Well TrumpCare left in place some tax hikes for several years, and now that it has failed, well, maybe no ObamaCare tax cuts are on the table.   Whether the tax cuts for the highest brackets will take place is anyone's guess.   If they do, it will be a debacle.   Why?  Same reason as before under Bush.  Cut taxes, cut revenue.   If the economy doesn't grow exponentially, revenue will not increase after a tax cut.   So less money coming in, more going out as Congress spends like drunken sailors and, well, the deficit clock starts to be a thing again.

Eventually that currency collapse the far-right keeps harping about will happen.  Eventually.

But when?   Timing is everything, and if I knew that, I would be a billionaire.   Some guys bet on the collapse of the housing market and won big - dumping those credit-default swaps just in the nick of time.   But they could have bet wrong - even by days, weeks, or months - and lost their shirt.   I thought the market would settle in 2002.  I thought it would collapse in 2005.  It went on nearly four more years before a real reckoning took place.

What is disturbing to me is the recent reports from Ford and GM than fourth quarter profits are down - by 50% in Ford's case.   That's a lot. If Trump follows through with his protectionist tax policies (which the GOP seems to think is a swell idea too) then the cost of importing parts could skyrocket.   Auto costs would increase, sales would drop, profit margins would slim, dividends would be slashed and share prices collapse.    That indeed is what happens when you start a trade war - and this is not some newfangled economic theory, either.

So, maybe we will see the Trump bubble collapse.   The question is when.   Next week or next month, or next year?  Or maybe years from now, as happened with Bush?
That is the tough question to answer!
Newer Post Older Post Home